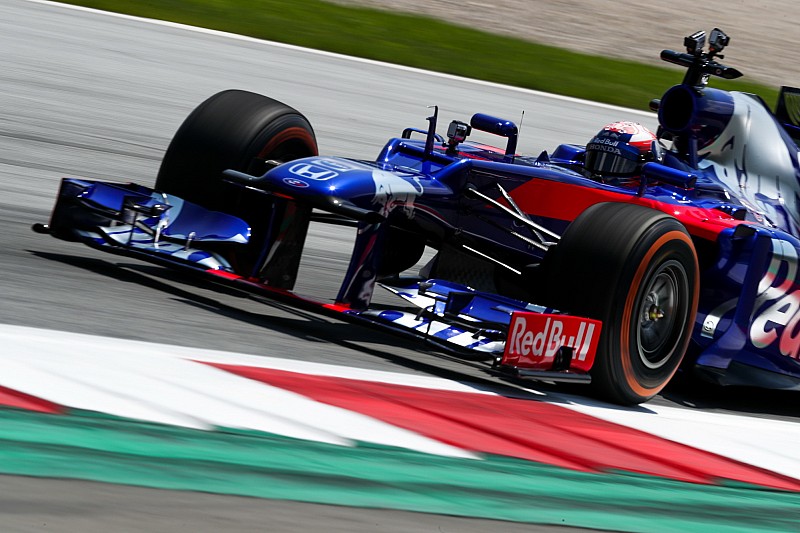 Four-time MotoGP champion Marc Marquez drove a Formula 1 car for the first time at the Red Bull Ring on Tuesday.

The Honda factory rider completed 43 laps behind the wheel of a Toro Rosso-livered Red Bull RB8 at a special test convened to promote the forthcoming F1 and MotoGP races at the Austrian circuit, before handing over to current Honda MotoGP teammate Dani Pedrosa in the afternoon.

Laptimes were not released officially, but Motorsport.com understands Marquez gradually worked his way down to 1m14.9s best, and was earlier on for a lap six tenths quicker before spinning at the final corner.

Marquez's best lap was more than 10s slower than Valtteri Bottas's pole time for last year's Austrian GP, but Marquez drove a 2012 'show' car on hard Pirelli demonstration tyres with no DRS, using a V8 engine with no KERS.

He lapped just over six seconds slower than Felipe Massa's pole time for the 2014 grand prix at this circuit.

"Today, a full smile, all day! It was a great experience," Marquez said.

"It was incredible to drive a Formula 1 car, because it's my first experience with a car at a track – I never drove before. I drove a Formula 3 car, but only two laps in Motegi.

"Yesterday I was very, very nervous, this morning too – difficult to sleep, even more than in a race weekend! But step by step we just tried to find a way, to enjoy, and it was really good.

"They tell me [I was] not bad [to begin with], but I was so far [away from the pace], but then step by step I understand the things, and around these legends everything is easier.

"It is a day that will be always in my mind."

Webber said it was an "honour" to coach Marquez, who was "super-impressive" in rapidly learning the techniques needed to drive a Formula 1 car properly.

"It's impressive, because obviously Marc is at the top of his game on two wheels and to come to drive a Formula 1 car, the way we generate the lap time is just so different," Webber said.

"We have so much downforce, so much cornering grip, the lateral component, the seating position is unique because the eyeline is different.

"A super-impressive morning. He chipped away, we got into the breaking areas, we got into the high-speed corners, and now we're into this last part which takes a bit longer to get the last bit of lap time out.

"In general it's been a real honour to be here. He's driven awesome."