A jubilant Juan Pablo Montoya closed the 2004 season, and his four years with Williams, by taking victory at the Brazilian Grand Prix. After a race long battle with McLaren's Kimi Raikkonen, Montoya claimed Williams' only win of this year despite ...

A jubilant Juan Pablo Montoya closed the 2004 season, and his four years with Williams, by taking victory at the Brazilian Grand Prix. After a race long battle with McLaren's Kimi Raikkonen, Montoya claimed Williams' only win of this year despite pressure from the Finn at the end. Pole-sitter Rubens Barrichello lost out in the first pit stop but at least managed to finish his home race for the first time in ten years, and scored third for Ferrari. 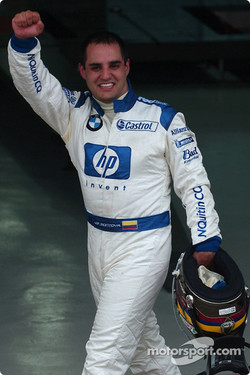 The predicted rain appeared before the start but it was not very heavy. Some drivers went out on intermediate tyres and some on dry but within a few laps the track had dried considerably as the rain eased. Barrichello led off and was overtaken by Raikkonen by the second corner, while Sauber's Felipe Massa fended off Montoya to move up a place to third.

It was short lived for Massa as BAR's Jenson Button and Montoya made it past the Sauber but Felipe wasn't giving in. The feisty youngster attacked back at Montoya, the pair going side by side, but Montoya stayed ahead. The Williams got past Button, then Jenson had Massa to deal with.

The BAR and the Sauber went head to head, first Button taking fourth then Massa taking the position, trading places until Button's race came to an abrupt end with an engine failure. The car had been smoking slightly on the grid and gave up under pressure.

"It was very disappointing to be out before the race really starts," said a frustrated Button. "There was a problem when I was on the grid, I think I sat there for too long, but I hoped it would go away. It's a shame because the car had been working well. It's a pity we couldn't end the season on a high."

Meanwhile, Barrichello was determinedly chasing Raikkonen and retook the lead at the first corner. Fernando Alonso, who's Renault started from eighth, suffered in the early laps on dry tyres and dropped down the field, but the tyre choice paid off later. So, after the initial battles it was Barrichello leading from Raikkonen, Montoya and Massa.

Michael Schumacher, who started 18th, had got his Ferrari up to 12th within a couple of laps but then spun and had to do it all over again. Giancarlo Fisichella also spun early on but kept his Sauber going. In the first round of pit stops Raikkonen and Montoya continued their fight along the pit lane, Raikkonen emerging onto the track ahead but Montoya whipping past him immediately afterwards.

Barrichello went in for his first stop, which left Massa in the lead. It was only for one lap before he too pitted but it must have been an enjoyable lap for the Brazilian to lead his home race. He dropped to tenth after his stop and Barrichello lost out in the pits, falling to sixth behind BAR's Takuma Sato after the order settled. 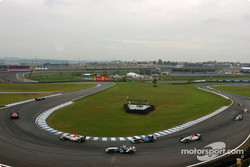 Alonso had worked his way up to second and finally pitted on lap 18, much later than most of the rest. Nick Heidfeld was the second retiree, his Jordan suffering a transmission failure. "I had hoped to end the race on a high, to give the team a good result," he said. "We had hoped for rain and we got a bit of drizzle but it wasn't enough!"

After the pit stop shakeout, it was Montoya leading from Raikkonen and the Williams of Ralf Schumacher, who was having a rather quiet time. Sadly for Jaguar, its last ever race was not a good one. Mark Webber and Christian Klien hit at the first corner and Webber had to retire with a broken front wing, although Klien managed to get back to the pits for a new nose cone.

Michael was now seventh behind Alonso and was putting the Spaniard under some pressure but not quite close enough. After a quite entertaining first stint, the race settled into a more sedate pace in the run up to the second round of pit stops. Ralf was first in, followed on consecutive laps by Barrichello, Sato and Montoya.

McLaren's David Coulthard and Renault's Jacques Villeneuve were having a bit of a squabble and Raikkonen inherited the lead until he too went in for his second stop. He rejoined in second behind Montoya, with Alonso and Ralf in third and fourth respectively.

It had another go at raining, light drizzle making the track briefly slippery but not enough to need a tyre change. Sato went wide at turn one and Barrichello nipped past for fifth and Ralf was closing on Alonso but not enough to actually do anything about the Renault.

In the final round of pit stops Barrichello made up two places to third, while Ralf and Alonso returned to their squabble after their stops. Ralf managed to get ahead but Alonso promptly snatched the position back. On Klien's last stop the Jaguar mechanics all gave him a farewell wave as he left his box, which was a nice touch.

Ralf was still determinedly harassing Alonso but couldn't find a way past, while Raikkonen wound up some fliers as he readied for his final stop. He didn't have quite enough time to beat Montoya for the lead but it was close. The McLaren rejoined just 1.4 seconds behind the Williams.

Sato emerged from his last stop ahead of Ralf and there was a train of four cars near enough nose to tail: Alonso, Sato, Ralf and Michael. None of them were quite close enough to make a move, although Michael was giving Ralf something to think about. Barrichello was somewhere ahead of the bunch, but not close enough to the leaders.

Sato was having a go at Alonso and had apparently forgotten that Ralf was right behind him. The Williams got past for fifth and meanwhile Raikkonen was closing on Montoya. The final laps began to unwind and the gap between the leading Williams and the McLaren was down to six tenths. But it was not to be; Raikkonen made a couple of little mistakes and Montoya was punching the air even as he rounded the last corner to head for the chequered flag. 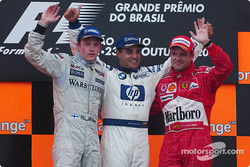 A very good drive by Juan Pablo to end the season on a high with the win, and a nice reward for Williams to finish their four year partnership. Raikkonen fought hard and drove well but had to settle for second. Barrichello may not have broken his duck of not winning at home, but he perhaps broke a small budgerigar to at least finish on the podium.

"It is just unbelievable!" declared Montoya. "The very first laps were difficult because I lost some positions at the start before the tyres got up to temperature, but then I seemed to have more grip than the others...It's fantastic to give such a good end to these four years at Williams BMW. I want to say thanks to Frank and to everyone in the team who made this possible!"

Raikkonen was disappointed to miss the win: "I was close to winning but just not close enough. It was a good race and I enjoyed it, but I would have liked to finish on the top step," he said. "2004 has been a tough season for the entire team, but everybody has worked so hard to turn things around, and to finish 2004 on the podium is a good reward for all."

Barrichello was happy to finish on the podium but he was not overjoyed about the conditions that did not go Ferrari's way. "I am very proud of the whole team and want to thank them and all the fans who turned up to watch today," he commented. "The circumstances of the race, in terms of the rain, did not favour us and I could have not done better."

Alonso came home a creditable fourth and Ralf boosted Williams' points haul with fifth. Sato salvaged three points for BAR in sixth and Michael was seventh. One point in eighth was scant reward for Massa's early, commendable efforts but better than nothing at all.

The rest were unremarkable; Fisichella and Villeneuve completed the top ten, followed by Coulthard and the pair of Toyotas. Klien at least finished Jaguar's last race, 14th, followed by Jordan's Timo Glock and the Minardis. Aside from Klien's shunt with Webber, there was little action to see outside of the top eight.

It was a fairly entertaining race and while the Brazilian fans would no doubt have rather seen Barrichello on the top step of the podium, Montoya was a popular winner. He and Raikkonen are going to be an interesting pairing at McLaren next year. Final top eight classification: Montoya, Raikkonen, Barrichello, Alonso, R. Schumacher, Sato, M. Schumacher, Massa.