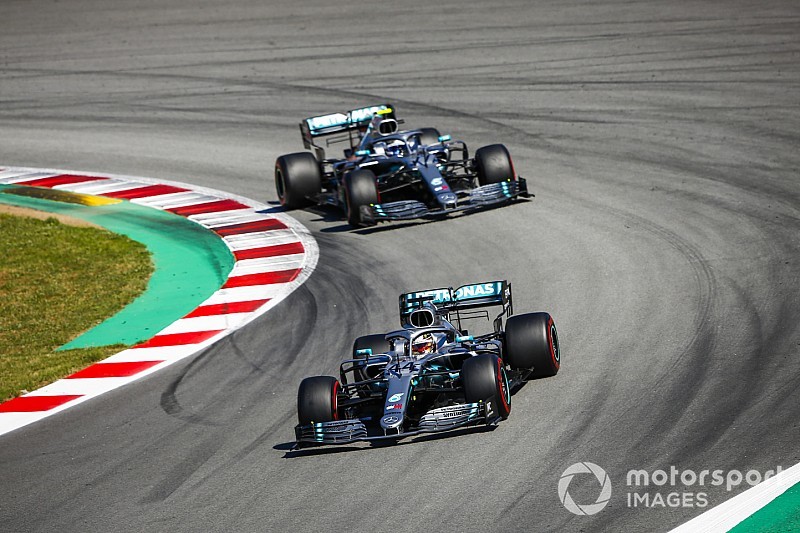 Mercedes does not believe it is realistic to win all 21 races in Formula 1 this season despite starting the year with five consecutive one-two finishes.

The manufacturer has won the last five drivers' and constructors' titles and has responded to a renewed threat from Ferrari, plus changing aerodynamic rules for 2019, with a record-breaking start to the season.

Asked if it was realistic Mercedes could win all 21 grands prix this year, team principal Toto Wolff said: "No. First of all, I think you need to stay humble and keep both feet on the ground.

"We've had five fantastic performances now and five one-twos but we don't take it for granted. It's not just saying it, it's really the mindset that we have.

"The next two weeks are going to be a tremendous challenge for us. We've not had the performance in Monaco in the last years. Remember how strong [Daniel] Ricciardo was last year in the Red Bull? They were in a league of their own.

"We need to take one step at a time. The next race weekend looks challenging on paper."

Two of Mercedes' five victories this season have been facilitated by Ferrari failing to make the most of having a faster car.

Ferrari should have won the Bahrain Grand Prix but Charles Leclerc suffered an engine problem late on, and the 21-year-old was quickest through the Azerbaijan Grand Prix weekend but crashed in qualifying.

Asked if he feared Mercedes winning every race this year, Ferrari team principal Mattia Binotto said: "We will never give up. Our ultimate objective is to do better than in Barcelona.

"Each circuit is different, already Monaco will be a different circuit to Barcelona. Our car has got some strengths and certainly weaknesses. It is certainly too early for such an assumption."

The closest Mercedes has come to a 100% record during its all-conquering performance in the V6 turbo-hybrid era was in 2016.

Mercedes won 19 of the 21 races held that year, missing out in Spain because its drivers crashed at the start and in Malaysia when Lewis Hamilton suffered an engine failure.

Red Bull appears the likeliest immediate threat to Mercedes' 100% record because of its form in Monaco, the next race on the calendar.

Team boss Christian Horner does not think Mercedes will win every grand prix.

He said: "I doubt it: 21 races to achieve 21 victories. Never say never but it'd be a hell of an achievement. It's very much a Mercedes championship. You can see that after five races that they're three points off of maximum score."

Fittipaldi: No problem switching from DTM to Haas F1 car

Gasly says his driving style is "too aggressive" for RB15