Mercedes Formula 1 chief Toto Wolff says his team will continue to be "really aggressive" in its title fight against Red Bull, acknowledging neither side is currently maximising its points.

Lewis Hamilton reclaimed the lead of the F1 drivers' championship by scoring his 100th grand prix victory in Russia on Sunday, beating Lando Norris after a late downpour and a well-timed switch to intermediate tyres.

Title rival Max Verstappen recovered from an engine penalty that left him last on the grid to finish second, ensuring Hamilton's championship lead only stands at two points.

Mercedes was able to extend its advantage in the constructors' championship after Valtteri Bottas rose to fifth in the closing stages, giving the team a 33-point buffer over Red Bull.

Hamilton called Verstappen's recovery to second place a "dream result" for the Red Bull driver, having seen a chance to pull out a bigger lead pass by.

Mercedes F1 boss Wolff accepted there were some "loose ends" to tie up from the last couple of race weekends, but said the team could not be defensive in its battle with Red Bull.

"In a way, we're not maximising our points scoring, and the same today," Wolff said after the race.

"I think quali was all decisive. Valtteri going back [after an engine penalty] we knew was difficult, and we ended up with a first and fifth, and that is very good, no doubt about that, and it's Lewis's 100th victory.

"But Max recovered in a spectacular form, and that is not good for the championship. 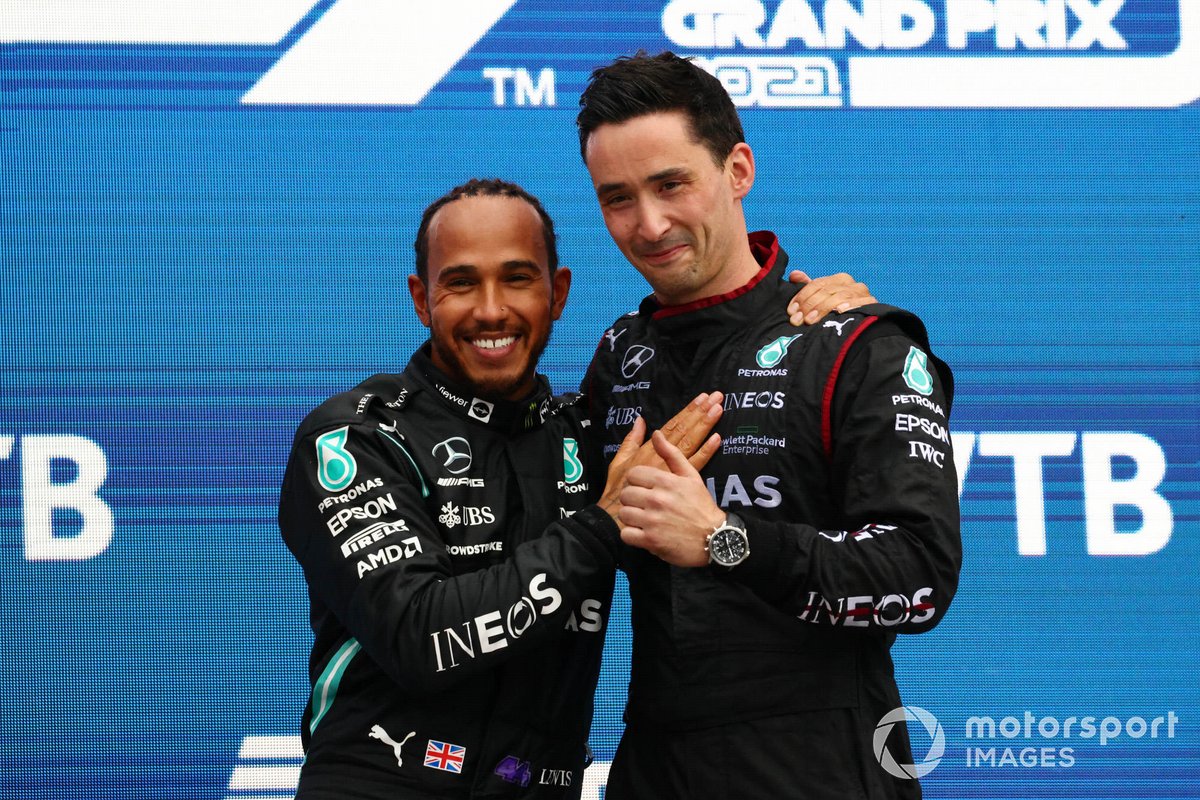 Lewis Hamilton, Mercedes, 1st position, celebrates with his team mate on the podium

"So in a nutshell, we just need to continue to be really aggressive in how we approach this season, not be defensive, but just move forward, in order to score these big points

"Because neither us nor the others are really good in maximising the points at the moment."

Neither Mercedes nor Red Bull has managed to record a 1-2 finish so far this year. The only team to have achieved the feat is McLaren, which scored maximum points in the Monza race.

Monza and Sochi had typically been two of Mercedes' best circuits, but Wolff said the tweaked regulations for 2021 meant it was not possible to trust the historic form guide.

"I stopped trying to anticipate whether it's historically a strong race for us, because everything with the new regulations, everything changes, so has changed so much," Wolff said.

"Definitely, we knew that Monza and Sochi would be coming more towards us. And the reality is we are where we are, and this is the points gap and I doubt that any of the two teams will make massive swings up or down.

"It's just about, really, to continue to do the best possible job."