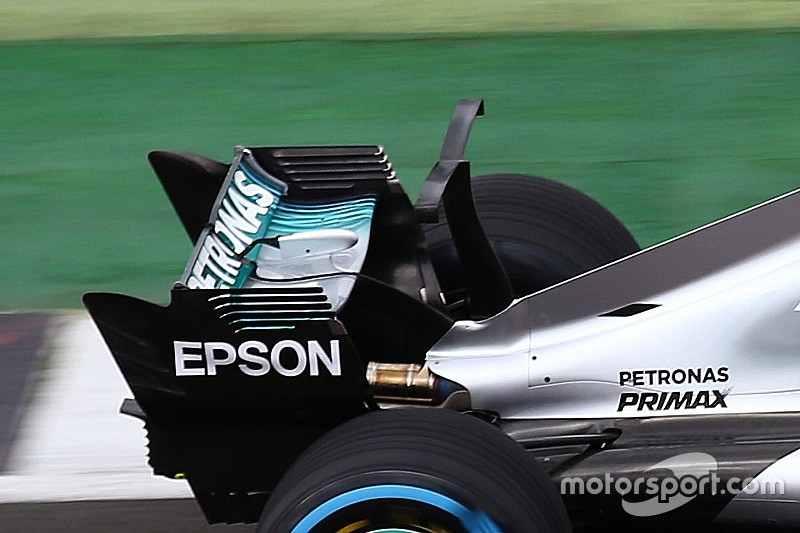 Mercedes says it is undecided about whether or not it will adopt a full shark fin on the engine cover of its 2017 Formula 1 car, after trialling a radical raised T-wing at Silverstone on Thursday.

The Brackley-based outfit caused a stir at the launch of its W08 when its new challenger was fitted with a high T-wing in front of the rear wing for its afternoon running.

The concept is very different from the solutions adopted by other teams, who have all so far opted for a more standard shark fin to help channel airflow over the rear wing.

When asked by Motorsport.com about its plans for the new car, engineering director Aldo Costa said the T-wing was one idea being looked at, but that a normal shark fin would also be evaluated during Barcelona testing.

"We have seen many pictures of other cars, but from now until the first race we will have a continuous programme of evolution," he said.

"As you have seen, the launch spec was without the little T-wing, and then we tested it – and then we will carry on in Barcelona day by day testing different configurations. We will have as well a longer tail configuration to be tested in combination with new rear wings for Melbourne."

F1 teams have widely spoken about an aggressive aero development race in the early stages of the season, and Costa revealed that the Mercedes would likely have all-new wings by the time of the season-opening grand prix in Australia.

"The car in essence from now until Melbourne will change all the aerodynamic surface," he said.