At the end of a Formula 1 season that Mercedes quite comfortably dominated, its defeat to Red Bull in the Abu Dhabi finale prompted some intrigue from a technical standpoint.

While the impact of Mercedes turning its engines down for reliability reasons, and not getting the best from the tyres, explained a lot – there could also be a further hidden factor at play to explain what happened…

The performance drop could revolve around a mindset that Mercedes has operated with for a while: putting its long-term gains of future car development over any short-term competitive needs. We know that Mercedes switched off development of its W11 pretty early to shift its focus for 2021; and it’s likely that approach was in play in Abu Dhabi.

With a post-season day of testing coming up, where teams could strictly only run the cars in the same specification they ran in for the Abu Dhabi GP, did Mercedes run some components in the weekend that were aimed more for the post-weekend run than the race itself? 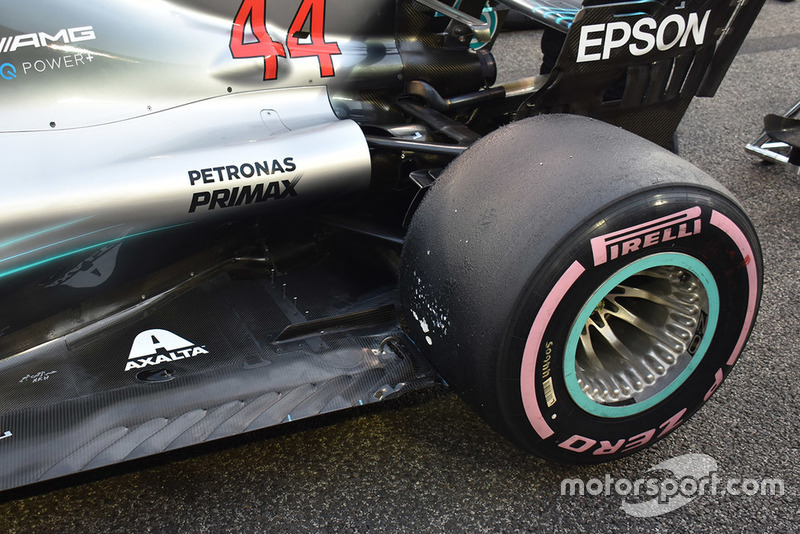 It is something Mercedes has done before. For the last two years it has exploited the same-spec rule by mounting a row of pitot tubes on the floor (see W09 above from 2018), which allowed it to capture data throughout the race weekend and during the test that followed.

While perfect for the test, it did mean the team was running a little overweight in order that it could carry the additional loggers required to store the data. Creating this moving laboratory inevitably led to it being slightly hamstrung throughout the Abu Dhabi weekend, but then allowed it to test and collect a huge pool of data that would help it improve performance coming into the 2020 season.

Having successfully retrieved what it needed at the end of last season, it may well be that Mercedes hatched a plan to take things a step further at this year’s post-race test by installing a number of components on the car in order that it might get a feel for how they perform. After all, next season we will be racing with cars that have a significant amount of carry over, so it’s the perfect opportunity to get real world information that can be fed directly back into the simulation loop. 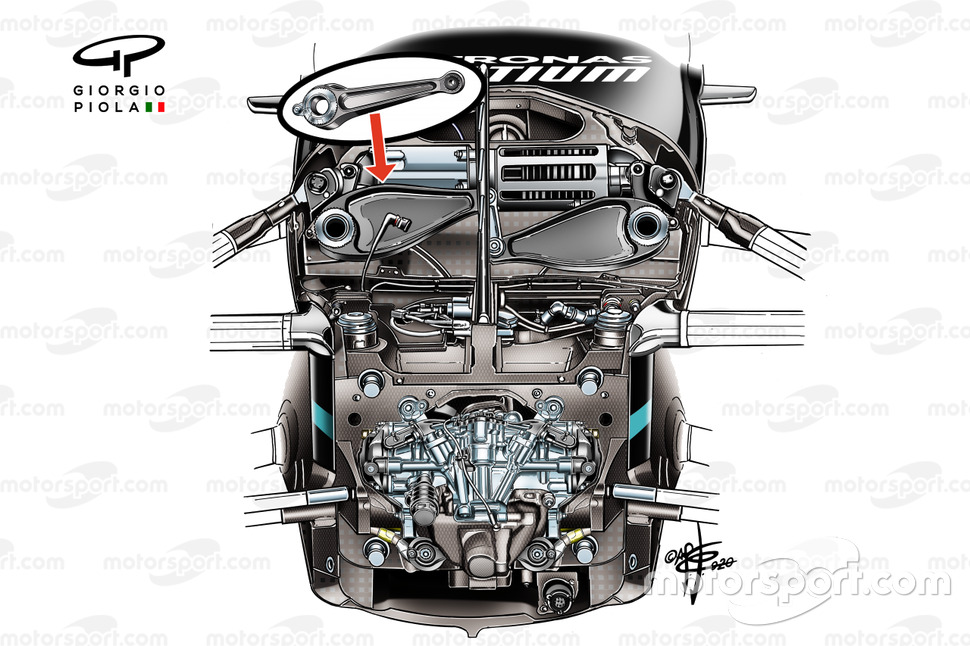 Despite a difficulty in taking close-up photos due to coronavirus protocol restrictions, Giorgio Piola noted a modification to the W11’s front suspension that was fitted to the car throughout the entire weekend.

As shown in the illustration above, a change has been made to the anti-roll bar connecting rockers, which strays away from a shape that’s been used for several seasons now, in favour of a smaller and more lightweight solution.

The catalyst for this change is likely to do with the incoming regulation changes and the new tyre construction being introduced by Pirelli for next season. The difference in construction not only means the shape of the rubber is slightly different, but it also alters the way you build core temperature within the tyre and how you look after the tread platform. 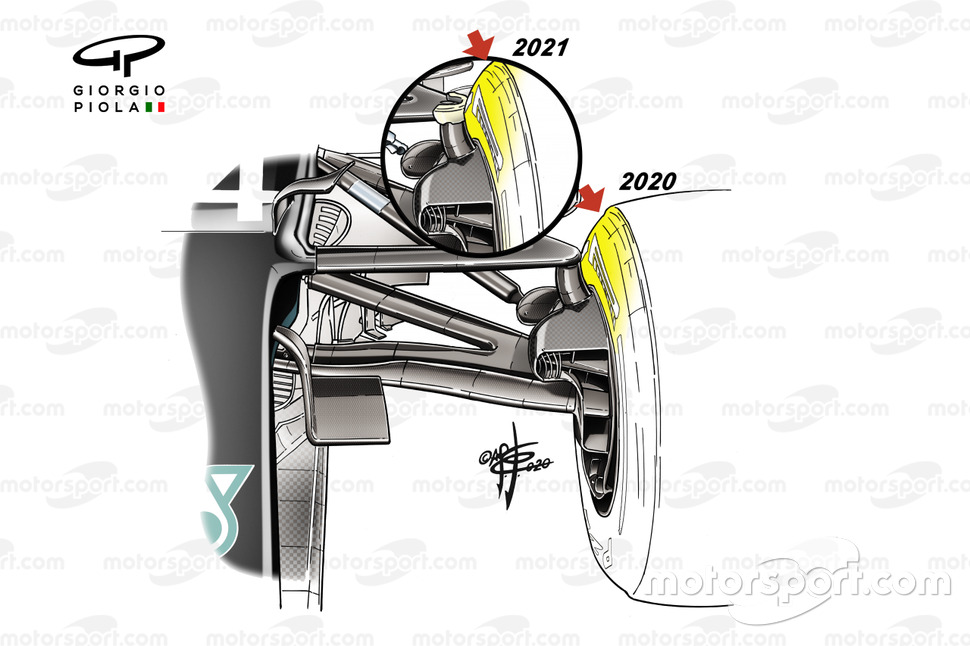 Interestingly, the change in tyre shape for 2021 may force Mercedes to make further alterations to its front suspension too, as the upright extension that it has used for several years places the wishbone in close proximity to the tyre’s sidewall.

In preparation for this, it has sleeved the end of the upper wishbone with a polystyrene cover to prevent damage when testing the new tyres. This also allows the surface to be shaved away by the tyre, giving a clear indication of how close it can position its wishbone before it fouls the tyre’s sidewall.

In evaluating the 2021 specification tyres during FP2, teams were required to complete a minimum of 10 laps on the rubber. However, the Mercedes pair pushed on, hoping to capture more data that could then be used in back-to-back analysis of the data from the post-race test on the 2020 tyres.

Eating into its usual weekend preparation time and choosing to run the new inboard suspension elements for the rest of the weekend suggests that the team was prepared to accept sub-optimal tyre performance, in favour of the extra dataset it would be able to create in the post race test. 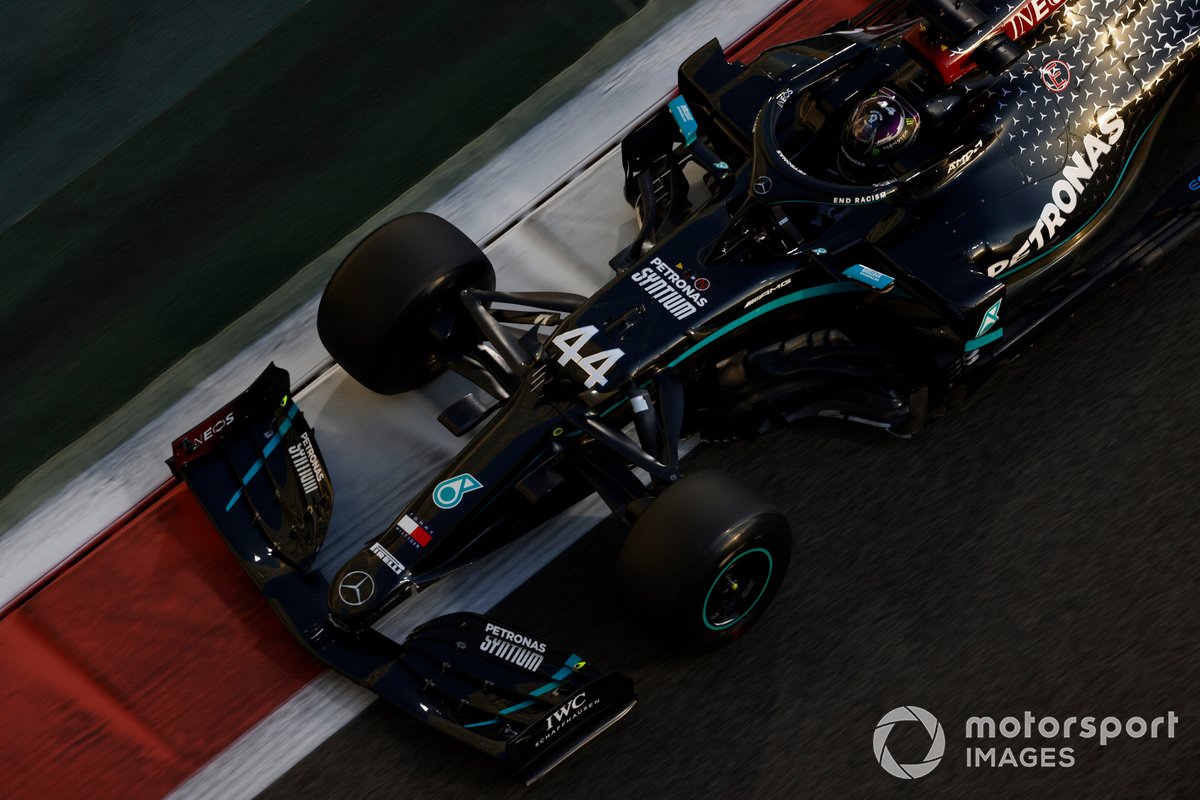 Meanwhile, it’s believed the team also installed the experimental radiator layout that was briefly tested on Valtteri Bottas’ car at the Sakhir GP, owing to the same rear bodywork and cooling outlet being selected as was used in that test. It’s understood that this new layout was designed to work in conjunction with next year's power unit.

Therefore, to maintain reliability, the team was likely forced to run in a lower power setting than would ordinarily be the case. This was perhaps underlined by the Mercedes pair being the slowest in the top speed trap during the race. 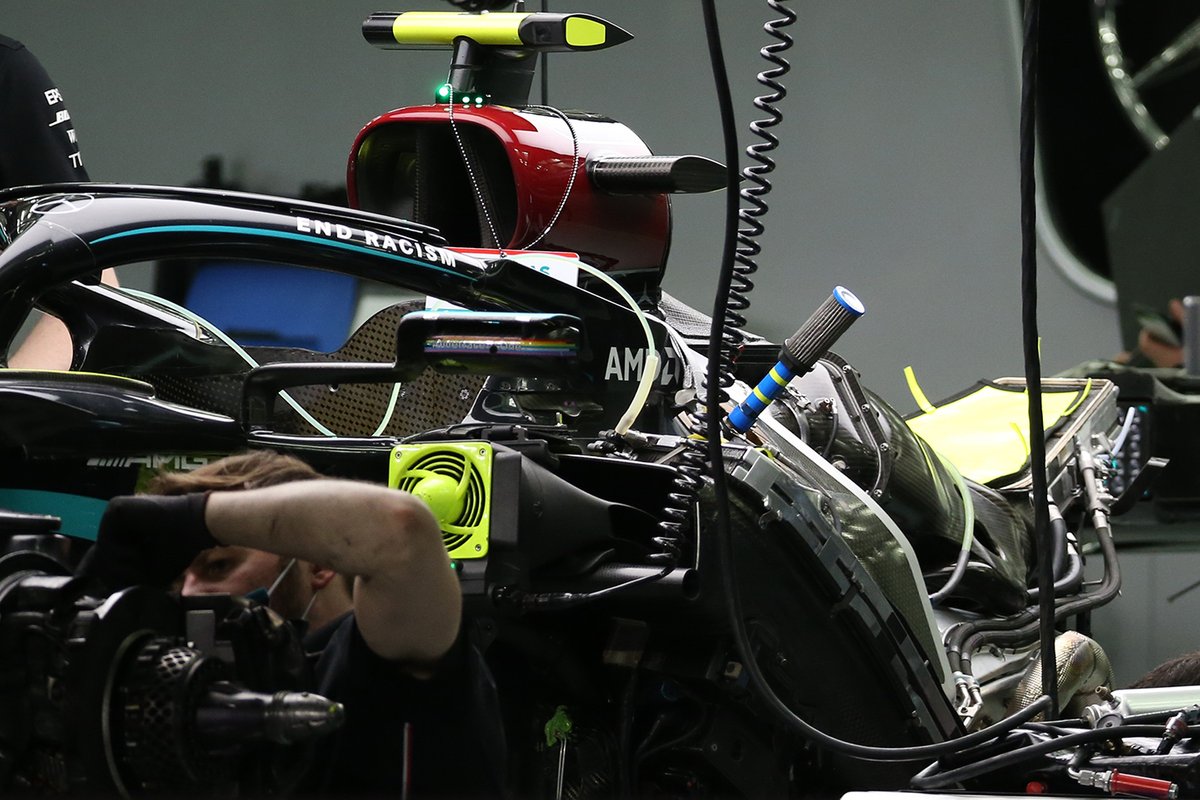 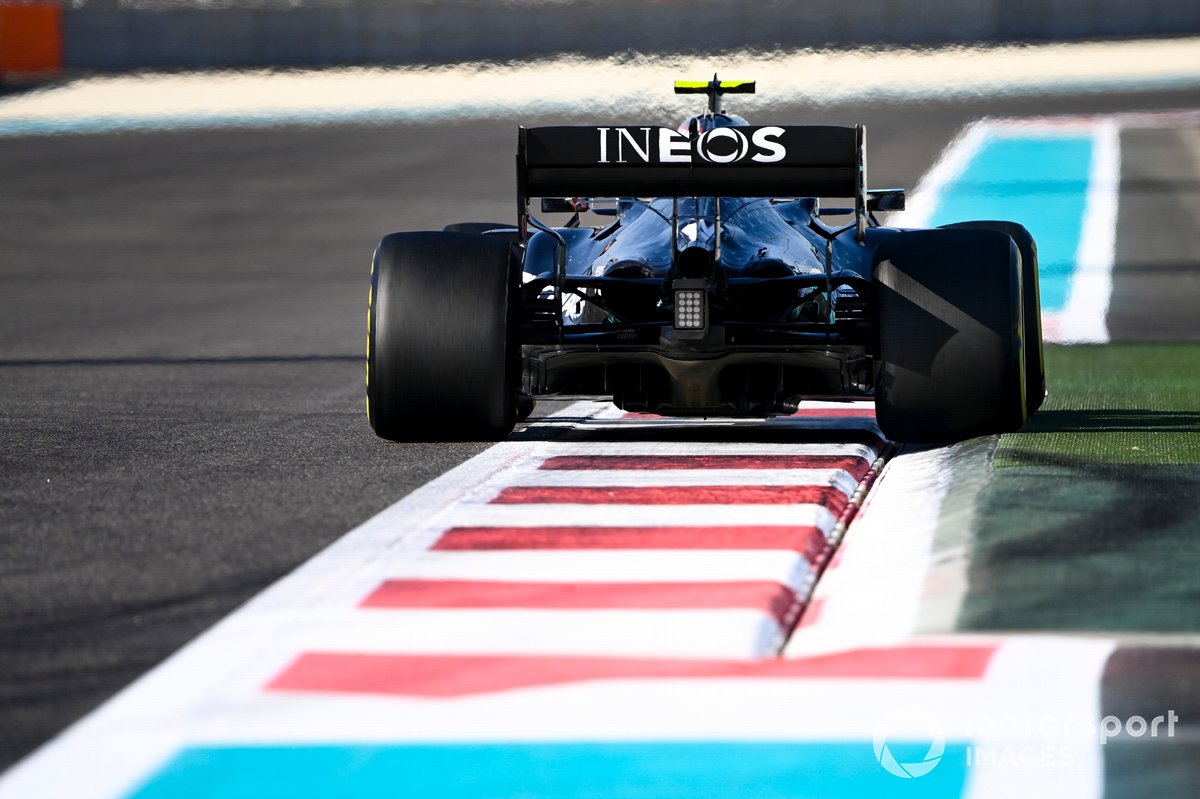 Having stopped development early this year to focus on the impending changes for 2021 and 2022, Mercedes may not have bargained for the large strides that Red Bull took in the closing stages of the season as it continued to develop the RB16.

But, with Mercedes’ plans for the season finale and post-race test already in motion for some time, it may simply have been a case of accepting some short term pain for the inevitable long term gains.