Toto Wolff says Mercedes’ Formula 1 strategists were “adamant” to pit Lewis Hamilton for intermediates late in the Russian Grand Prix after he ignored an initial call to come in.

Hamilton scored his 100th grand prix victory after capitalising on a late rain shower in Sochi to beat McLaren's Lando Norris, switching to intermediates with three laps of the race remaining.

Hamilton was initially unsure about the decision as the majority of the track was dry, and was seen passing pit entry and continuing for another lap after receiving a call from race engineer Pete Bonnington to come in and switch to intermediates.

The decision to eventually come in paid off as the rain grew heavier, resulting in Norris spinning off and slipping all the way back to seventh place in the final classification after waiting two more laps to come in.

Speaking to Norris in the TV pen after the race, Hamilton said that he didn't want to come in as he was so close to the McLaren driver.

"My team were great today," Hamilton said to Norris. "But I ignored the first call, I was like, 'no, he's right there!'"

Mercedes F1 boss Wolff acknowledged after the race that it was always difficult for the driver to have the full picture, but that the team was aware of the growing rain shower that was coming.

"I think for the driver, it's always very difficult when half of the track is dry and the other one is just a bit humid," Wolff said.

"We knew that the big weather was coming. So Valtteri [Bottas] pitted the lap before, and then our weather frog and the strategists were adamant to pit." 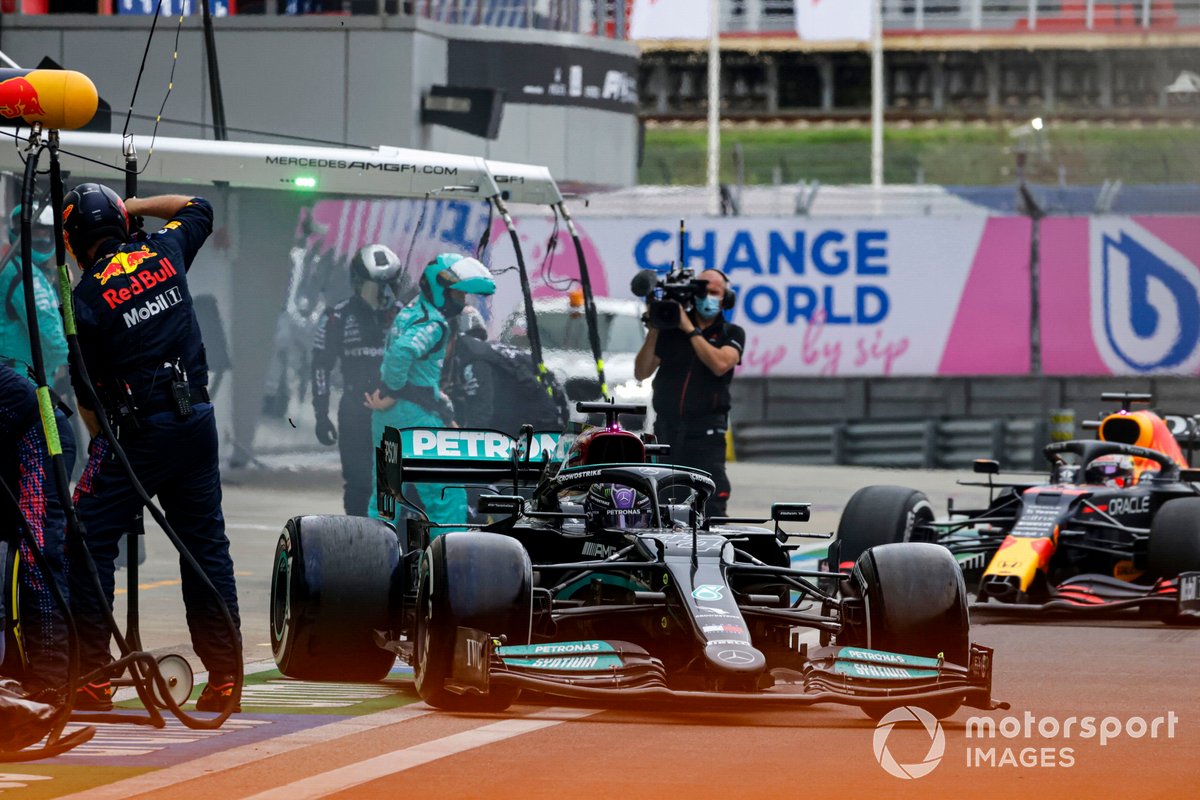 Hamilton recovered from dropping to seventh on the opening lap to sit P2 behind Norris following the pit stops, and had reduced a gap of almost nine seconds down to just over one before the rain hit.

"We were in a way prepared to brace for the tough end, whether we could overtake Lando on-track or not," Wolff said.

"Then the rain hit, and things got pretty erratic at that stage. I understand why it was so difficult for McLaren to take this decision to stay out or come in.

"As a leader, you can only lose. We benefitted from that today, and it's spectacular for the fans I guess."

Hamilton thought that it would have been "tough" to catch and pass Norris for the win had the race stayed dry, having spent a spell earlier in the race stuck behind the second McLaren of Daniel Ricciardo.

Wolff felt it was "difficult to say" if Hamilton would have passed Norris without the late rain shaking things up.

"Lewis was stuck behind Ricciardo at the beginning of the race, although Ricciardo had DRS," Wolff said.

"I think it would have been difficult to pass. They had a fast car today, and it was well managed from his side.

"They had a bit of a fuel worry, it seemed, and then when he picked up the pace, he was very quick."