Mercedes scores the team's eighth 1-2 finish of the year 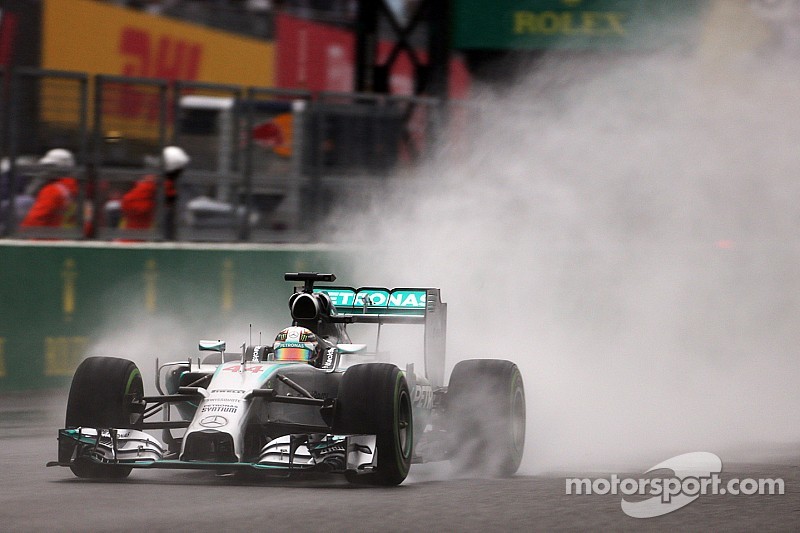 The race was brought to a premature end by a red flag on lap 44 after an accident for Jules Bianchi at Turn 7. The thoughts and prayers of the entire team are with Jules and our colleagues at the Marussia F1 Team at this time.

Lewis Hamilton: "Our first thoughts go to Jules - it overshadows everything else when one of our colleagues is injured and we are praying for him. Next to this, the race result doesn't seem significant at all. Nico and I had a tough battle, we were pushing really hard. I had a big moment at Turn One when I was too late getting off the DRS as I was just pushing so hard but fortunately I was able to get back on track.

The conditions were difficult throughout but I had more pace than Nico today and could follow him quite comfortably in the early stages. This is not an easy circuit for following another car or for overtaking, but he made a mistake out of the last corner and I was able to pass.

The whole approach then needed to change to look after the tyres and make sure I stayed in the lead until the end of the race. But like I said, that's not what matters today; our thoughts are with Jules.

Nico Rosberg: "My thoughts are with our colleague Jules and his family and team-mates, and we are hoping for some positive news. Today was a really tough race with the wet conditions. I struggled a lot with the balance of my car on the intermediate tyres, so I had to push hard to keep Lewis behind me. I had a lot of oversteering which is why the rear end of my car was very nervous.

That was really strange and I didn't have the necessary confidence in the corners; we need to look into that in the next few days. It meant that Lewis was quicker today and deserved the win. It was damage limitation with losing only seven points to him. For the team it was a good result with another 1-2.

Toto Wolff: At this stage, the only important thing is that Jules Bianchi is okay and recovers; the sport is not as important as that now.

Paddy Lowe: Our thoughts are now with Jules Bianchi as we wait for more news of his condition. We had predicted a difficult race from the moment we saw the forecast for this weekend but the weather didn't prove as bad as we had perhaps expected. It was a tricky start behind the Safety Car but then much of the race unfolded in intermediate tyre conditions.

We pulled out a lead at the beginning which meant we were able to shadow our competitors with the pit stops and let the drivers battle it out on track. They had a hard dice and Lewis managed an impressive overtake at Turn One. In conditions like we saw today, a one-two finish is a good achievement for the team.

I would also like to thank the fans, who were fantastic in their support this weekend - as always in Japan - and who make it such a pleasure to race here. But most importantly of all, we are all hoping to hear some positive news about Jules soon.

Bottas finish sixth and Massa seventh as the Japanese GP started, and ended, behind the safety car