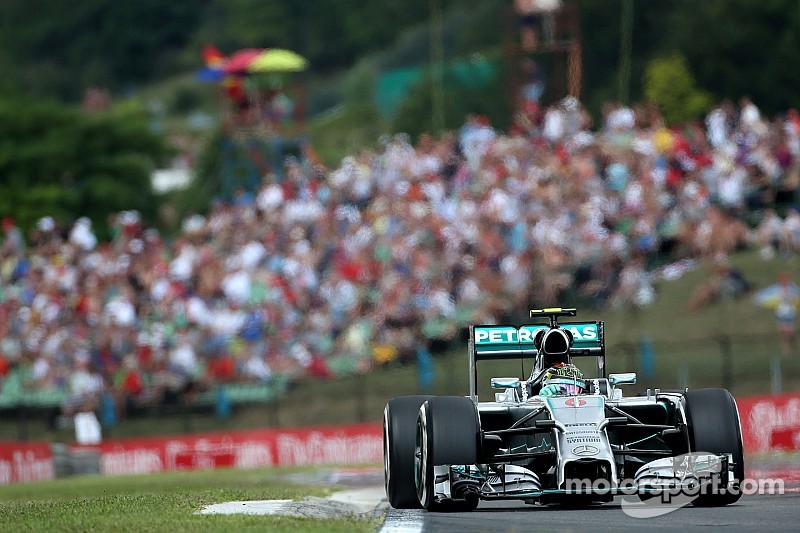 A fuel leak saw Lewis Hamilton eliminated in the Q1 phase without setting a time.

Nico Rosberg took pole position during qualifying at the Hungaroring this afternoon, while a fuel leak saw Lewis eliminated in the Q1 phase without setting a time.

Nico took his sixth pole position of the 2014 Formula One season - his third in a row after Great Britain and Germany.  Mercedes AMG Petronas has now taken 10 pole positions from 11 races so far in 2014.

A fuel leak and subsequent fire for Lewis during his warm-up lap in Q1 prevented him from setting a time. The team has yet to determine the extent of damage incurred by chassis F1 W05 Hybrid/05 and its component parts. A full investigation will be conducted into the cause of the problem in parc ferme.

Nico Rosberg (Q3: 1:22.715, P1): "That was a very tough Qualifying session today - especially with the rain at the beginning of Q3. It's difficult to judge which braking point is best in changing conditions so I was a bit over the limit at times - especially into Turn One. I was lucky there, but in the end I nailed the last lap so I'm quite happy to be starting from pole. On the other side, it's a real shame for Lewis and the team. I know how much it hurts to have technical failure where there is nothing you can do as a driver. We need to sort out the reliability issues but I know that tonight there will be great team effort to fix his car - just like in Hockenheim where the whole garage pitched in to help rebuild it. It takes away a bit of the excitement when there is no gloves-off battle because that's what we are here for. But tomorrow is a long race and I'm sure that Lewis can get another good result."

Lewis Hamilton (No Time): "I can't really believe it today, there was just nothing I could do. There was an issue with the car as I was coming out of the second to last corner and then the engine just cut out. I thought we could get it back to the garage but then I looked in my mirrors and saw the whole rear end was on fire and that was it. Now we need to see what damage has been done to the car tonight and see whether the gearbox or engine needs to be changed. It's getting to the point where it's beyond bad luck now - as a team, we need to do better. Tonight, I need to somehow find the way to turn this into a positive for tomorrow, then build on that going into the race. It will be a very difficult afternoon as it's one of the hardest circuits to overtake on. But these things are sent to try us and how I come out of it is going to be the most important thing."

Toto Wolff: "Let us start with the positive note of this afternoon and congratulate Nico for a very controlled pole position. In the final runs, it was all about finding the right balance between risk and reward. He used the first run to understand the track conditions, then on his second run set three purple sectors for a very strong pole position. It was a classy job. On the other side of the garage, I was devastated for Lewis. The team has been working so hard to deliver the best possible car for both drivers so it is upsetting to see him suffer another problem in qualifying. A Mercedes in flames is not what we want to show the world - but just as importantly, it's not the standard we set for ourselves in the team. I apologise to Lewis and to all his supporters for this problem which has given him another mountain to climb tomorrow. But we know that if anybody can do it, Lewis can. We will be burning the midnight oil to give him the best possible car and strategy for the race."

Paddy Lowe: "I am absolutely gutted that we have let Lewis down again and given him such a tough job on another Sunday afternoon - so soon after his fantastic drive in Germany. We are still stripping the car to understand the cause of the fuel leak but the symptom was a loss of high pressure fuel to the direct injection system of the internal combustion engine. This fuel leak then caused a major conflagration which is likely to have written off most of the car. We will obviously be doing our very best to give Lewis the car and the strategy necessary to make the best possible recovery in the race tomorrow. On the other side of the garage, the rain in Q3 brought a stressful twist to the session in its closing minutes. Nico was under a lot of pressure from the changing conditions and some very competitive laps from Red Bull and Williams. But he delivered a fantastic lap time in the end to take another pole position, so well done to him. Overall, however, a huge apology to Lewis and his fans for our failure today."

"It's getting beyond bad luck, it's something else" - Lewis Hamilton