Mercedes has made no secret of the fact that one of the biggest gains it has made with its car this year has been in its low-speed corner performance.

By:
Giorgio Piola
Co-author:
Franco Nugnes
Listen to this article

Valtteri Bottas admitted as much in Montreal on Thursday when he said that the car’s rotation in such turns was a huge performance and confidence boost.

“It feels like it rotates well,” said the Finn about the W10. “It is clearly a big improvement since last year or the year before. We saw in some of the slow-speed corners we were not the best but now we have made huge steps and definitely the front end of the car is a lot better on the entry.

“It means you can brake a tiny bit later and rely on the front to get the car turned through to the exit. Compared to last year the car is feeling much more like it is going where you want it, and that is obviously a good feeling.”

Much of the focus for this step forward in form has revolved around Mercedes’ front suspension, which features an unusual double bracket solution.

Effectively shortening the pushrod, this design helps the nose dive relative to the suspension when a lot of steering lock is used – which helps with both aerodynamic performance and loading up the front tyre.

But the front suspension design may not be the full answer for Mercedes’ advantage, for there appears to be an interesting solution at the rear of the car that can be shown in Giorgio Piola’s exclusive illustration. 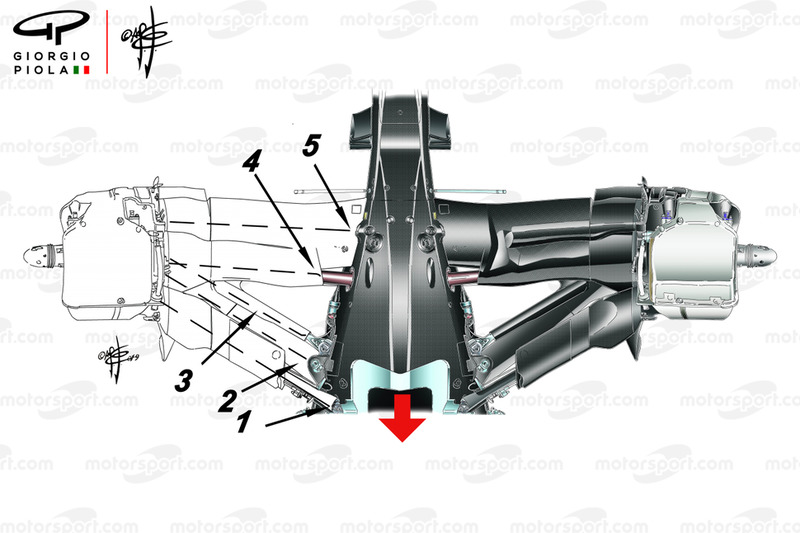 But the most interesting points are at the rear, where at (4) the wishbone covering also extends to the driveshaft. The main body of the wishbone element is at (5), and the carbon fibre 'body' features a slot gap as it tends further outboard to work the airflow harder at this point.

The design not only helps deliver mechanical gains to better manage rear tyre temperatures – something Mercedes has really got on top of this year – but also brings aerodynamic benefits.

The suspension arms are designed in such a way that they generate a flow that is better aimed for optimising the rear diffuser performance, with an increase in load that does not increase drag.

According to the regulations, only six suspension members may be used per wheel upright - with a traditional wishbone counting as two. Hence, Mercedes appears to have cleverly employed the trackrod - which retains the horizontal position of the rear wheel and controls toe in/toe out - into the rear wishbone geometry.

Bottas reckoned it would be wrong to say Mercedes’ progress this year was mainly down to the slow speed form – for there had been aerodynamic advances too.

“I cannot say that there is one big thing compared to last year’s car, I think it is overall,” he said about where the biggest gains had come from this year. “It [the suspension] is one part of it how it feels mechanically.

“But I will still say in this sport nowadays aero is the bigger part in what we have seen. We may be a bit slower compared to Ferrari on the straights but we are hopefully quicker than them in all the corners and that is also downforce, so I would say that is the biggest improvement compared to last year.”