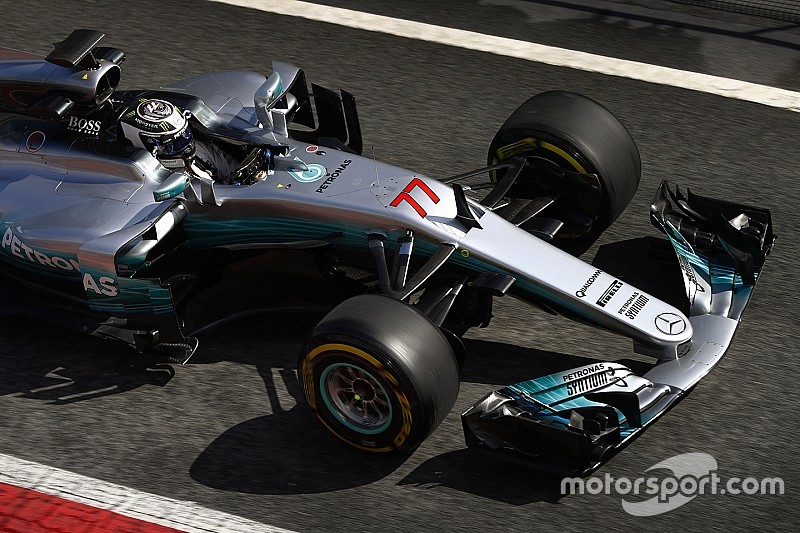 Mercedes is set to bring a heavily updated Formula 1 car to the second pre-season test this week, as it bids to build on its strong start to 2017 running.

The German car manufacturer delivered impressive mileage and strong pace during this week's first Barcelona test, as it showed no signs that its advantage in F1 had been eroded by the all-new regulations.

But with a number of teams expected to bring new parts to the second test, it has emerged that Mercedes will be one of the outfits to bring a more extensive development package to lift its performance potential.

There have already been suggestions that the developments, allied to it pushing more on its engine maps, could deliver it a further two seconds.

Valtteri Bottas confirmed after last week's test that there was optimism about what was being planned for the second test – as the focus switches to performance.

"We are definitely hoping we can make good steps forward next week," he said. "From the running this week, it's tricky to make a detailed analysis of where we are compared to the other teams, and we don't know what other teams are bringing next week, or for Melbourne.

"Definitely we are aiming to improve day-by-day, and now we need to work on all the things we tried this week. For me also, I need to take everything in I learnt this week, which was a massive amount. We'll try to analyse all that and try to make myself better next week."

Bottas ended this week's test with the fastest overall time – 1m19.705s – with it widely predicted that laps will get down in to the 1m18s region next week.

Speaking about his performance, Bottas said he did not get too excited about having ended up fastest overall – as the most important thing for him right now was understanding the car.

"It does not have a special meaning, because it is only testing and there is no reward for that, really," he said.

"We weren't particularly focusing on the laptimes this week; the priority definitely for us all week was to get mileage in, plus work on any issues with the car if there's anything to come – because better here than in the races.

"For me it was also important to get the mileage, so I was happy to do plenty of running and going through the test programme of the team. So overall a good week.

"I learned a lot, plenty of laps. The times for me are what they are; maybe next week we can do a bit of laptime analysis on where we are.

"But what matters then is what people are bringing into Melbourne for their cars and what the performance is going to be there."