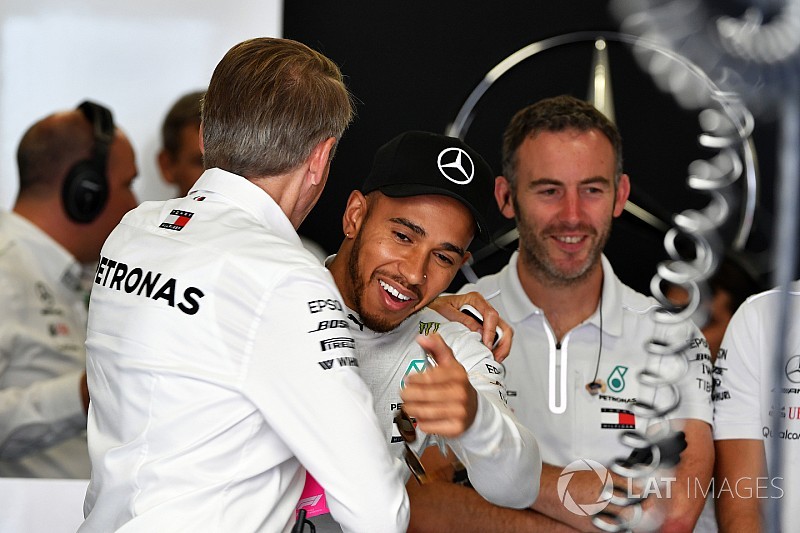 The Mercedes Formula 1 team's front-row lockout in qualifying for the Spanish Grand Prix has come at an opportune time to relieve recent "nerves" at the outfit, according to driver Lewis Hamilton.

On the back of Hamilton's dominant pole position in the Australia season opener, Mercedes was beaten by Ferrari for three consecutive qualifying shoot-outs, as the Scuderia emerged with what appeared to be the 2018 field's quickest car.

And the trend looked set to continue in Barcelona as the Silver Arrows trailed Ferrari through Q1 and Q2, only for Hamilton and Valtteri Bottas to step up their pace, the pair lapping 0.040s apart in Q3 to secure the first Mercedes qualifying 1-2 of the campaign.

"I think for the team, I think it has been a struggle," Hamilton said after qualifying.

"And I’m sure there have been a lot of people with nerves over the past few races, just not really understanding [what's happening], constantly learning but feeling that we’re not learning quick enough.

"So, to come here and get the one-two in qualifying, it is a true show of all the hard work everyone is doing."

Hamilton leads the championship after inheriting a fortuitous win in Baku, but admitted heading into the Spanish GP weekend that he felt he had been "punching below my weight".

Asked by Motorsport.com just how important the Barcelona pole was to him in light of his recent form, he said: "We've had one pole, we haven't really had great qualifying sessions after that, so it was important for me to get back into a good position with qualifying, as it is usually a strength of mine.

"So it was definitely important, and I am happy too especially because I had such a busy week coming into this weekend.

"To have the performance I've had, I am very happy with that."

Hamilton suggested earlier in the weekend that Ferrari had been "sandbagging" in practice, and repeated the claim, albeit more jokingly, after his qualifying success - with Sebastian Vettel coming up just 0.132s short of pole on a late soft-tyre run.

"It was a great close qualifying, obviously all weekend was close," Hamilton said."Ferrari was probably sandbagging just because they could, they've always had a very quick car.

"But it took everything from us to get this result, and to get a 1-2 in qualifying is fantastic."

Barcelona crash one of my biggest - Hartley