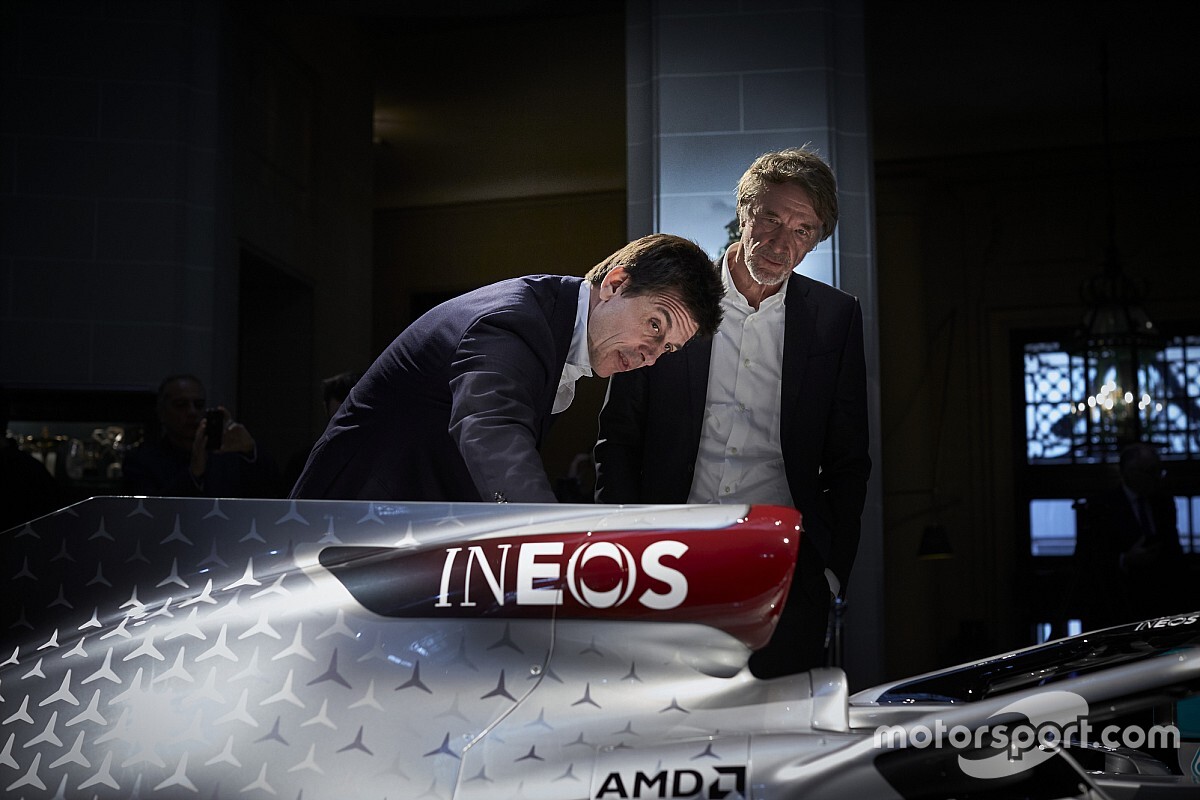 Mercedes partner INEOS has been linked with a deal that could see the company buy shares in the Formula 1 team. Here's a background of INEOS and its founder Sir Jim Ratcliffe.

Who is Sir Jim Ratcliffe?

From a humble background in Lancashire, 67-year-old James Ratcliffe used a degree in chemical engineering obtained at the University of Birmingham as a springboard for success in industry. He later honed his management skills at the London Business School.

He formed INEOS in 1998, and expanded it through a series of acquisitions in the petrochemicals field, notably involving former BP assets.

What does Ratcliffe do?

Ratcliffe is a 60% shareholder in and the chairman and CEO of INEOS plc, which employs an estimated 22,000 globally.

In 2017, he expanded from his core petrochemical interests with a £1bn investment to create an automotive division with the intention of marketing the 4WD Grenadier, which is based on the Land Rover Defender. He also owns the Belstaff brand, famous for its motorcycle clothing.

Why was Ratcliffe knighted?

Ratcliffe received his knighthood in the Queen’s Birthday Honours list in June 2018 for services to business and investment, just a few weeks after he was named by the Sunday Times as the UK’s richest man, with a fortune estimated at £21bn.

The news of his knighthood didn’t pass without controversy due to his connections with fracking, and later a move to Monaco as a tax exile also caused a stir among critics.

The INEOS logo on the bodywork of the Mercedes F1 W11

What is the involvement of INEOS in sport?

In April 2018, Ratcliffe created INEOS Team UK with a view to winning the America’s Cup in 2021.

The team was created in partnership with Sir Ben Ainslie, whose previous effort, under the Ben Ainslie Racing name, had a technical collaboration with Adrian Newey and Red Bull Technology, with former McLaren boss Martin Whitmarsh as its CEO.

In early 2019, INEOS was announced as a sponsor of the hugely successful Team Sky cycling outfit that has scored seven Tour de France wins since its first in 2012. The team – which is managed by Sir David Brailsford – quickly transitioned into Team INEOS, and in 2020 became INEOS Grenadiers, promoting the company’s 4WD vehicles.

Ratcliffe has an interest in football via Lausanne in Switzerland, and Nice in France, and at one stage he was connected to an investment in Chelsea. He also backed Eliud Kipchoge’s sub-two hours marathon bid.

What links do Ratcliffe and INEOS have to the Mercedes team?

Ratcliffe met Toto Wolff when he visited a grand prix as a guest of another sponsor. The two chatted, and having realised they had a lot in common, a deal was quickly done.

In December 2019, the team announced that its new Mercedes-Benz Advanced Science division – established in large part to use people and other resources made available by the F1 budget cap – would provide technical support to the sailing and cycling projects.

Just a couple of months later INEOS was announced as a major sponsor of the F1 team, with a five-year deal.

Is it true that Ratcliffe wants to buy the Mercedes team?

Ratcliffe’s history of buying into successful and established sports teams mirrors the way he has tackled his wider business life – building through acquisition, and applying his own management style.

He clearly now has an interest in F1, and buying a stake in the best team, and one with whom he is already in business via his technical partnerships, makes a lot of sense.

He’s also in the car business with the Grenadier, and future synergies with Mercedes could be a logical by-product – although the first model uses BMW power.

The first sign of a crossover is a move by INEOS to acquire from Daimler the Smart car factory in Hambach in France as a manufacturing base for the Grenadier.

What shareholding could Ratcliffe take in Mercedes?

The Mercedes F1 team is 60% owned by Daimler AG, with 30% in the hands of Toto Wolff, and the final 10% allocated to the late Niki Lauda – a pattern established when Wolff first came on board to lead the team.

Lauda’s shares in effect remain in limbo, and a purchase could be an obvious starting point for Ratcliffe and INEOS should he decide to make his involvement in the team more formal.

Is Mercedes committed to the future of its F1 team?

Mercedes is set to win its seventh pair of drivers’ and constructors’ world championships in 2020, having dominated the sport since the start of the hybrid era in 2014.

Given that all manufacturers regularly review their motor sport involvements, even when at the height of their success, a change in the set-up of the team is not out of the question.

The key was signing the new Concorde Agreement, which commits the team – if not necessarily Mercedes as majority owner – to being part of the future of the sport.

Daimler AG already gets a very good deal, as the Brackley-based team’s sponsorship and TV income is so great that the mother company had to put only a net £30m into the pot in 2019, although that does not include its additional support for the HPP engine division in Brixworth.

With costs coming down from 2021 due to the budget cap, even with less income from F1 over the next couple of years – due to the much-reduced income from race hosting fees – the team is potentially set to be very good business for whoever owns it, with a profit to be made.

In that sense it could be seen as a strange time for Mercedes to reduce its shareholding, having invested so much over the years.