Mercedes felt "behind the curve" at Zandvoort after Friday struggles

Mercedes believes it was "behind the curve" in its fight against Formula 1 title rival Red Bull throughout the Dutch Grand Prix weekend ahead of its defeat on race day.

Max Verstappen controlled proceedings at Zandvoort on Sunday to win the race for Red Bull and move back into the lead of the drivers' championship ahead of Lewis Hamilton.

Hamilton and Mercedes were unable to answer to Verstappen's pace in the race despite their best efforts to get ahead via the undercut, twice pitting early to try and jump ahead into the lead.

Second place nevertheless marked a decent turnaround for Hamilton, who had lost most of his running on Friday after a lengthy red flag in FP1 followed by a power unit issue in FP2 that limited Hamilton to just one timed lap.

Mercedes trackside engineering director Andrew Shovlin explained after the race that the setbacks had left the team on the back foot against Red Bull.

"Even going into qualifying, because we did the medium [in Q1] and then we were on cold tyres because of a red flag going into Q2, it was quite late before we actually had a run where it was hot tyres out of the box that were fresh," Shovlin said.

"So we were just playing catch-up a bit. It was encouraging to see that we could get close [in qualifying]. I know Max didn't have a perfect lap.

"But the weekend, we've been a little bit behind the curve and trying to catch up, and need to get everything right to beat them."

Mercedes encountered particular struggles through the Turn 2 and 3 complex, with the banked Turn 3 posing a new challenge to the teams and drivers. 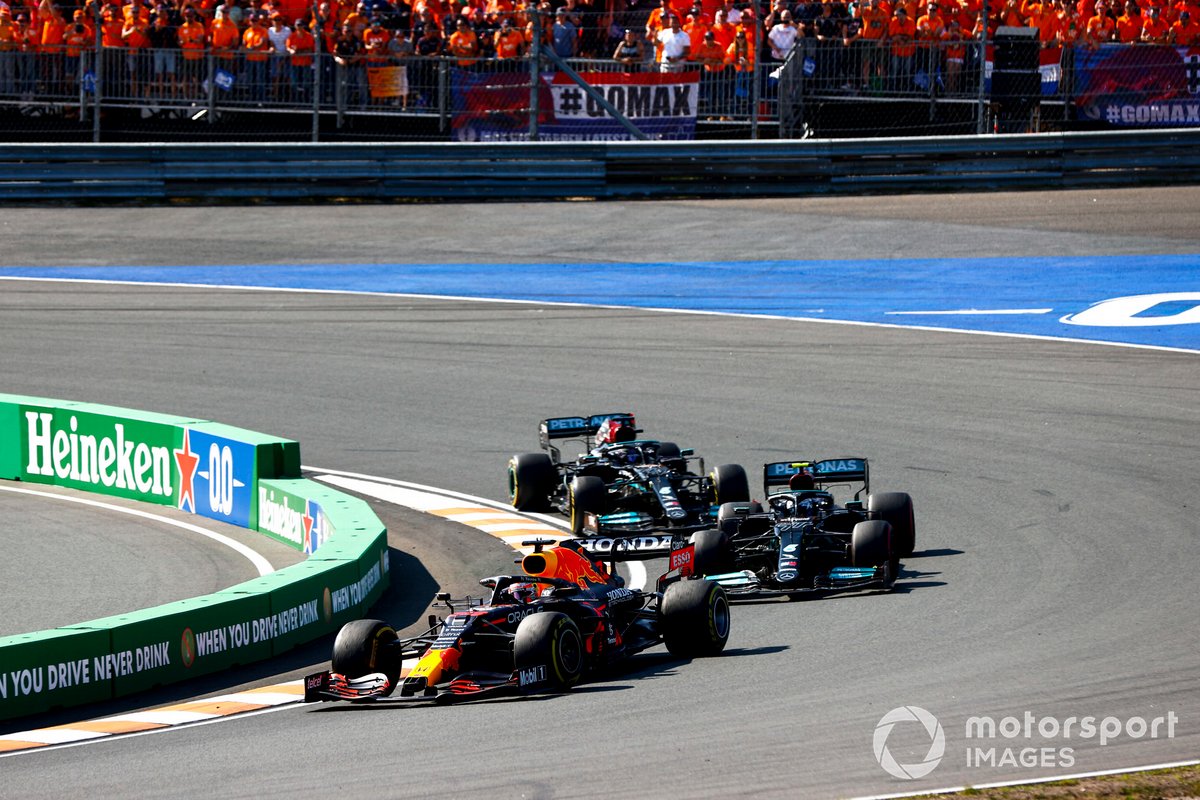 Shovlin revealed Mercedes found a different balance was required for its W12 car at Zandvoort than it had anticipated from its simulator work to prepare for the weekend.

"The banked corners are very unusual, and certainly the sequence of Turn 2-3 is quite tricky," Shovlin said.

"There may be elements that are quite specific to our car that make it difficult. But also when you're doing the simulator work, once you know a circuit, you know how to set up the simulator to replicate it very effectively.

"The balance we had on the simulator was quite different to the one that we had when we came here and started running the car on Friday. And that was why we had to move it a bit more in terms of set-up than we do normally.

"I think with a bit more knowledge, next year it will be easier, but some of it was just that coming to a new track, there's a lot that you don't know, and that just left us with a bit more ground to make up than we would have liked.

Mercedes F1 boss Toto Wolff said he expected the performance advantage to swing circuit by circuit, but that it had to execute its processes perfectly to beat Red Bull.

"We just need to be on our A-game all the time," Wolff said.

"And with these little lapses, with not being able to complete FP2 in a proper way, as a starting point, and then in the execution of the race itself, we just need to be… it needs the A-game to win the A-championship."