Valtteri Bottas believes it will be hard for Mercedes to run a one-stop strategy in the Monaco Grand Prix after a failed attempt to qualify with the ultrasoft tyres. 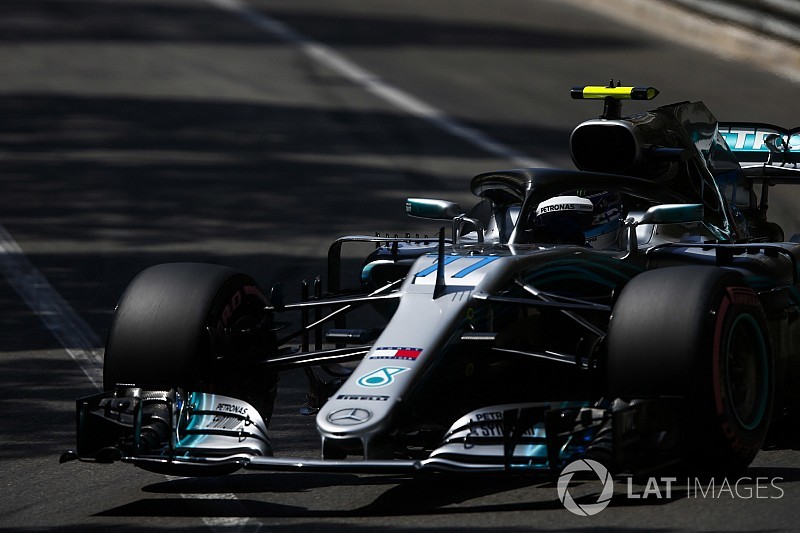 With doubts over the longevity of the hypersoft, several teams considered using the ultrasoft in Q2, which would allow them to start on it and have greater strategy flexibility in the race – including the possibility to run an ultrasoft/supersoft combination, avoiding the hypersoft completely.

A one-second delta between the hypersoft and ultrasoft meant that it was always going to be a risky ploy for anyone other than Red Bull, which had a clear pace advantage.

In the end Mercedes was so keen to avoid the hypersoft on Sunday that the team took the plunge with both drivers.

However, neither Hamilton nor Bottas could deliver a quick enough lap on their first runs with the tyre in Q2, so they joined the rest of the field on hypersoft in order to guarantee their passage through to Q3.

"We were keen to try to find out whether we could qualify on the prime," said Toto Wolff. "Because starting the race on the hyper will be tough. I think we've seen a lot of graining on the front left, and we've seen some degradation on the rear.

"Probably the one who is in the lead is going to manage the pace very carefully in the race tomorrow, and still run out of tyre after a few laps. It could be quite a tricky situation and you would want to avoid the hyper."

Bottas said it was worth taking the gamble, and voiced concerns about being able to pull off a one-stop now that the team is committed to the hypersoft.

"We tried it. If we can get it working well, because it would be nice to start with the ultra and against the hyper we could do a long stint and create nice opportunities, especially if we are not starting on the front row, but it didn't work out.

"I think it [the ultra] is a decent race tyre. I think we can do relatively long stint with the ultra. Small issues with graining, but nothing compared to the hyper.

"We struggled quite a lot in practice, so I think honestly, starting with the hyper it is going to be difficult to do a one-stop."

Bottas said that the Q2 gamble was close to working.

"We were lacking in the end, from our calculations, one tenth to make it happen. Now everyone starts with the hyper it will be interesting to see who grains first."