At the start of the 2022 Formula 1 season, a victory for Mercedes seemed to be something it could only dream of as it seriously struggled with the W13’s porpoising.

But its 1-2 finish in the Brazilian Grand Prix is proof of how relentless it has been in its pursuit of performance throughout the campaign.

Although there have been times when it has found itself in a development or set-up cul-de-sac, it has worked diligently to get the answers it needed to move the W13 to the front of the grid.

While there have been some tough moments this year, the experience should also set it in good stead for the next few seasons, as the team now has some knowledge and understanding that some of its rivals might not about the intricacies of the new generation of ground effect cars.

One theme that has been ever-present this year is in its drivers running different aero set-ups in order to find the balance they prefer, which continued from the start of practice in Brazil.

Lewis Hamilton's W13 was fitted with a lower downforce configuration during FP1, as the rear wing featured an upper flap with the trailing edge trimmed back (below left). 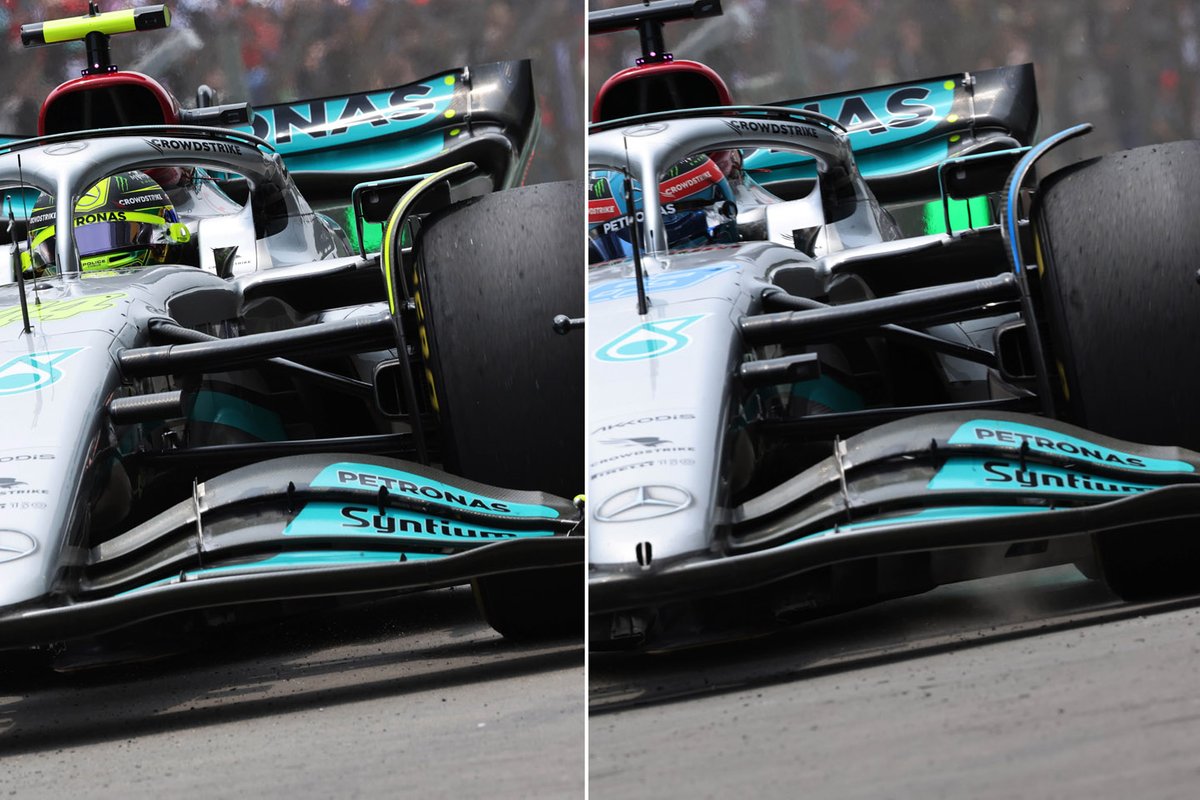 The selection changed a little as qualifying approached, with both drivers sporting the same upper flap. However, Hamilton opted not to run the trailing edge Gurney that was fixed to George Russell's rear wing (main image, blue arrow) though.

This was likely in response to the differing solutions used on the endplate's upper rear corner, as Russell employed a more traditional cutout, whereas Hamilton used the full wrap-around variant.

The changes speak to Mercedes' modular design approach this season, which has reduced the number of wings that need to be manufactured, which helps with costs. It also reduces time when making set-up changes, as the parts are easily interchangeable.

The rear corner of the endplate, for example, can be switched without needing to change the entire assembly (main image, inset). 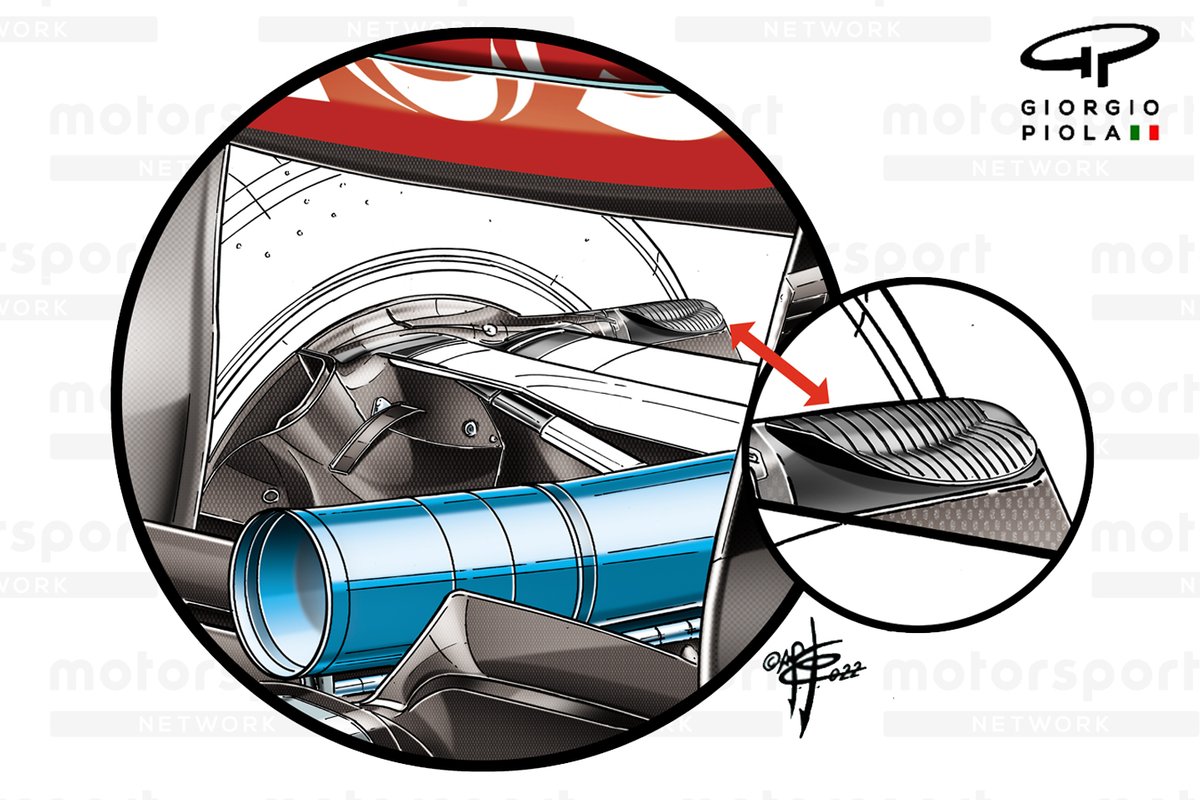 Mercedes also continues to pursue interesting and novel solutions not found elsewhere on the grid.

As seen above, the winglet in the upper front quadrant of the rear brake duct fence features a micro-aerodynamic solution, as slots have been cut into the surface to allow the airflow to migrate between.

Red Bull looks to the future with spy cams 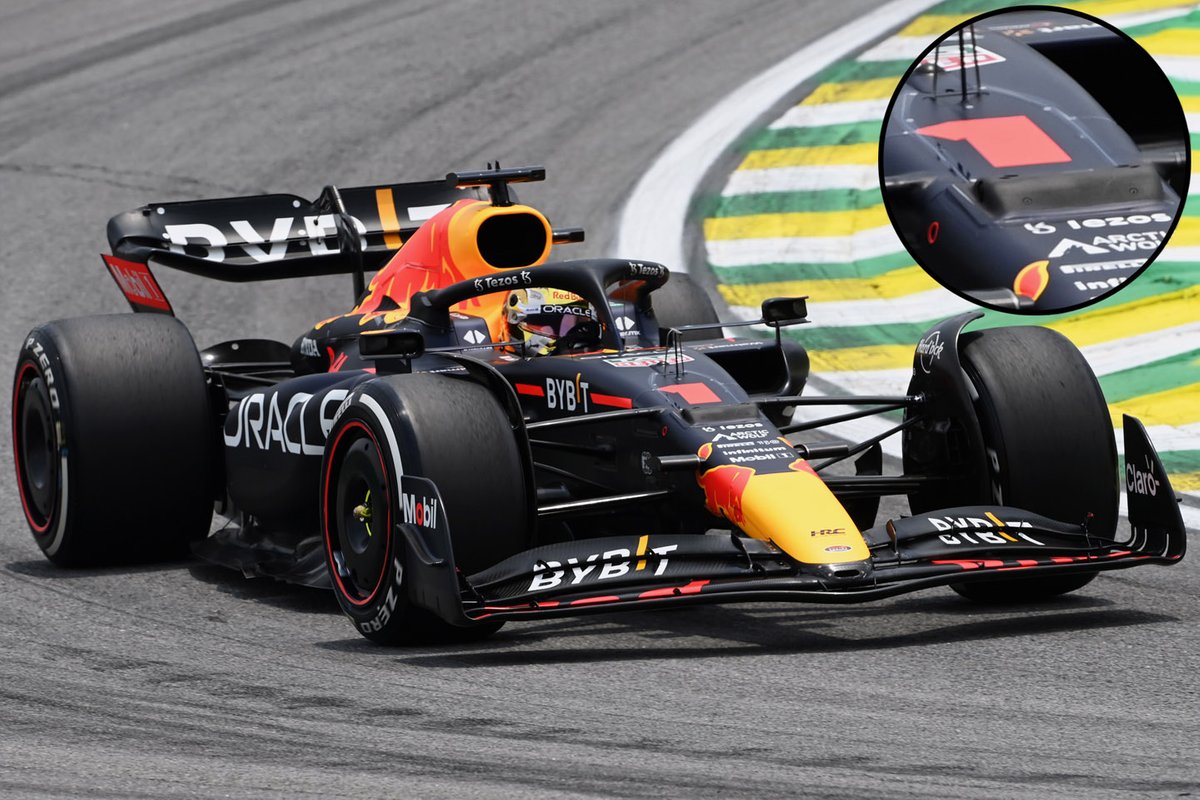 For a short period during FP1, Max Verstappen's Red Bull Racing RB18 carried a small pod on the brow of its nose.

The pod, which appears to have been 3D printed, features apertures at either end, with cameras mounted within in order to capture footage of the area alongside.

It's unclear whether these cameras were focused on the suspension elements, front brake duct deflector, the tyre's sidewall or a combination of these.

But it's interesting that the team feels it needs to monitor this, albeit briefly, as it continues to look for ways to improve performance heading into 2023.