Sep.8 (GMM) Norbert Haug has admitted Mercedes is eyeing possible "contingencies", in the event Michael Schumacher does not race the German team's 2013 car. 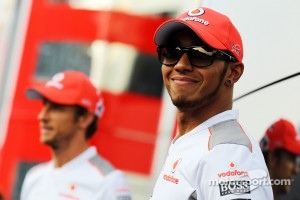 "Of course we have to plan for all contingencies," said Mercedes' competition vice-president, amid raging speculation Lewis Hamilton might sensationally switch from McLaren to drive in Schumacher's place next year.

Haug is quoted by SID news agency as revealing the team is conducting "open and faithful" talks with Schumacher.

And when asked about Hamilton, he added: "Lewis grew up with us (Mercedes) and with McLaren. We worked together even when he was 12 years old.

"But it is not possible to conclude from this that the current rumours have any basis."

"As long as seats are available, you have to deal with it. We do not spread the rumours, but we have to live with them," he said.

"I think that any article that includes a sentence that begins 'Eddie Jordan understands ...' is automatically questionable," he told the BBC.

But Jordan's television colleague David Coulthard, a former long-time McLaren driver, said the Irishman has earned more credibility than that.

"EJ has a reputation for being a bit outspoken but he has brokered more driver deals than almost anyone in the sport, has contacts all over the place and is friendly with Lewis's manager, Simon Fuller," he wrote in the Telegraph.

"I cannot recall him being wrong when he has stuck his neck out like this. He was right about Michael Schumacher coming back to the sport three years ago, for instance," Coulthard noted.

So for now, the Hamilton saga is the talk of the Monza paddock.

"He looks so unhappy at McLaren -- I think he will go," an unnamed team principal told the Guardian.

Jenson Button, Hamilton's teammate at McLaren, thinks the 2008 world champion would be mad to move.

"It wouldn't hurt me as much as I think it would hurt him," he said.

But as Coulthard surmised, no one at present really knows if Hamilton is staying or going. And "I'm not sure that he does either," said the Scot.

No one better on market to replace me - Massa