Mercedes is considering switching to a high-rake concept with its Formula 1 car in 2018, as it bids to eradicate the 'diva' characteristics of its current machine. 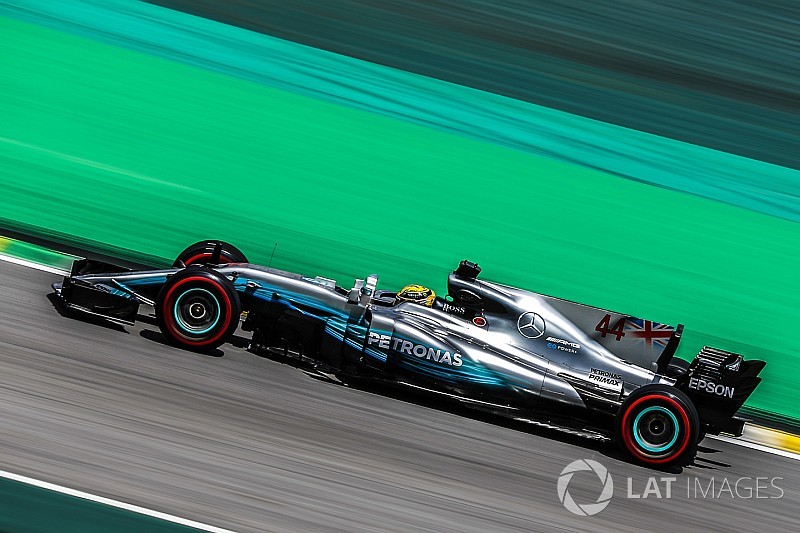 The German car manufacturer has faced a tricky time to fully get on top of the balance of its long-wheelbase W08 throughout this season.

While it has worked brilliantly at some high-speed tracks like Silverstone and Monza, it has struggled at other venues with tighter corners – like Monaco, Hungary and Singapore.

Although some of that performance swing between tracks is explained by the car having a longer wheelbase than its closest rivals, the team thinks that other characteristics may have a bigger part to play in its performance.

One area being evaluated in the final races of the season is whether or not Mercedes should pursue the aero concept put to good use by Red Bull of a high rake car.

It was interesting to note that Mercedes was spotted making major changes to its suspension set-up in Brazil last weekend, which could have been related to trials of the high-rake concept.

By running the front of the car low and the rear high, it is possible to create a form of ground effect through a combination of the front wing sealing the airflow and the diffuser performing better because there is more air flowing underneath it.

Getting the front of the car as low to the ground as possible is a challenge though, because the floor car bottom out around the 'tea-tray' area.

The arrival of titanium skid blocks in 2014 was partly motivated to deter teams from high rake approaches, but Red Bull has since been able to recover ground in this area.

It is understood that Mercedes has begun experiments with higher rake angles now that the championships are won, and it was noticeable that its car was seen sparking in Brazil as it floor touched the ground more than is normal.

One of the biggest concept differences between Ferrari and Mercedes this year has been the wheelbase of the car.

Mercedes has gone much longer with its W08, an approach that it felt would pay off over the course of the season despite it meaning its car would not be as well suited to tighter tracks

Despite the possible change to a high rake car, the Brackley-based team remains confident that the length of its car works well – which is why there is unlikely to be any significant change on this front for 2018.

Niki Lauda, Mercedes' non-executive chairman, told Gazzetta dello Sport last weekend that wheelbase was not a factor in its performance.

"The length was never a problem. It was aerodynamics," he said. "There have been times when the car behaved in a fantastic way, and other times not.

"We have not yet fully understood it and that is what we have to correct for 2018. The rules are not changing so, having a good starting point, it will be easier to solve certain troubles."

Mercedes boss Toto Wolff said recently that his team needed to ensure that any changes it made for next year must not sacrifice the strengths of the car.

"We would like to keep the characteristics of the diva that we like, but getting rid a little bit of the difficulties," he said.

"What you can see through the grid is that many people struggle in understanding why the car functions one day and not the other. We've seen it with our competitors as well.

"So, there is a car development process now to identify the root causes of why we struggle and try to avoid it with next year's car. Obviously we are quite far down the process of designing the car."

He added: "We don't believe that any of the characteristics on the more difficult days have anything to do with the longer wheelbase. We see with the Red Bull and Ferraris that they have good days and bad days."