Mercedes explained the situation with Lewis, that it was a filming for televison

May 23 (GMM) Mercedes on Thursday hit back at reports Lewis Hamilton racked up a huge damage bill after a jet-skiing stunt in Monaco.

A Swiss newspaper had said the 2008 world champion performed an extra-tight turn in front of a boat of photographers on Wednesday, deliberately soaking and damaging photo and TV cameras and mobile phones. 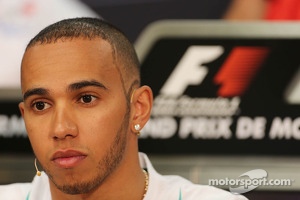 But a Mercedes source on Thursday insisted that the story was not the classic case of a celebrity lashing out at paparazzi.

Rather, Hamilton and Nico Rosberg were performing on jet-skis for a television film crew.

And the claims about the cost of the damage to equipment was also wrong, the source said.

"The TV equipment is fine, as Sky themselves confirmed to journalists asking questions yesterday," said the source.

"One photographer who failed to protect his camera equipment got some water inside it. But not specifically from something Lewis did.

"As he is a freelancer, we will make the goodwill gesture of helping to repair/replace the equipment," he added.