Mercedes: We could regret Hungary swap, but it was right thing to do 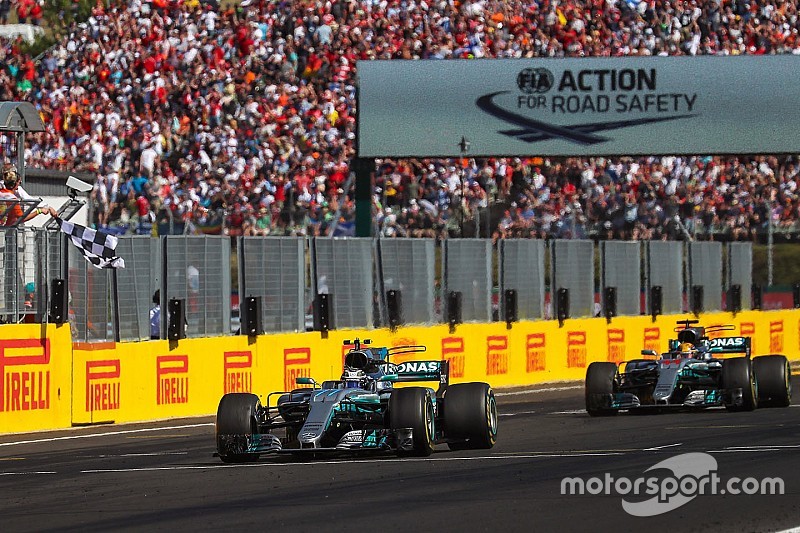 Mercedes admits it could come to regret the place swap between Lewis Hamilton and Valtteri Bottas in Hungary if it ends up costing it the Formula 1 championship – but it insists it was the right thing to do.

Hamilton went through with a promise to relinquish third place to Bottas on the final lap at the Hungaroring, having been released earlier by the Finn to see if he could better challenge the Ferraris ahead.

Although Hamilton knew he had to live up to his word to give back the place, he is mindful that if he loses the world championship by the three points he gave away, the decision could come back to haunt him.

Wolff readily admits that Mercedes could yet pay a price for what happened, but he thinks that ensuring fairness and a strong team spirit within the Brackley-based outfit will deliver much bigger rewards in the future.

"Saying I wouldn't regret the decision would be very naive," said Wolff about the possibility of the swap costing Mercedes the title.

"The truth is that if we miss out on the championship by those two or three points, everybody would say it is because of Budapest. And I would be the first to shoot myself in the knee.

"Nevertheless, I think long term, standing by what you say and standing by your values, is going to make us win more championships.

"It was a tough call to make and a very difficult one. Believe me, it is probably the most difficult call we had to make in the last five years, because we were not sure how close Max [Verstappen] would come at the end.

"So I am not in a happy place at the moment. But what can I say? If you are not fast enough at least you are sportsmanlike."

Wolff appeared quite emotional after the strain of the race, and was seen triumphantly banging his fist on a table when Hamilton did go through with letting Bottas past at the last corner.

And while other teams – notably Ferrari – have historically been ruthless in throwing their weight behind one driver, Wolff says that is not an approach that Mercedes supports.

"We have seen the backlash of decisions that were ruthless and cold blooded and the effect it had on the brand. You could say screw it, it still won them the championships, who cares? They are down in the history books.

"But if I come back to what I think, what the purpose of us being here is, it is doing the right thing and winning in the right way. And sometimes doing it the right way and standing by your values is very tough. And it was today. I feel terrible."