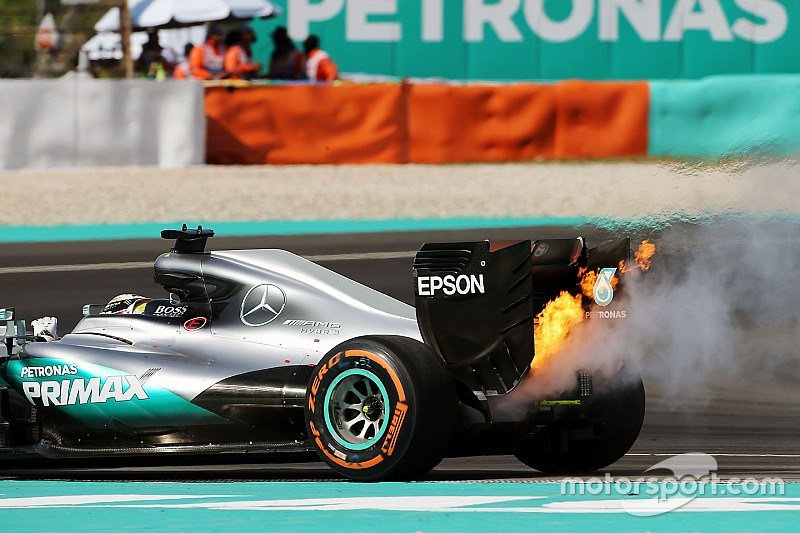 Mercedes has reassured Lewis Hamilton that he is now back on level terms with Nico Rosberg in terms of engine availability, despite his Malaysian Grand Prix blow up.

Hamilton was robbed of victory at Sepang after his engine failed while he was comfortably in the lead – and it prompted concerns from the reigning world champion that he would now be on the backfoot in terms of power units for the rest of the campaign.

But Mercedes executive director Paddy Lowe has said that Hamilton should have no fear of being forced to sit out any practice sessions because he has exactly the same components as his teammate.

“It [the engine that failed] is the specification we first introduced in Spa,” Lowe told Motorsport.com. “It did one practice session.

“He still has the other one from Friday in Belgium that’s a ‘new’ engine, plus the one that he ran in Belgium, Italy and Singapore. We’ve got two full sets anyway.

“I need to understand why these things keep happening on my car,” he explained. “There are 43 engines and there are eight cars out there, Mercedes cars, that have the same engine as mine but none of theirs happen to fail.

"For Mercedes, I am the number one driver, so sure, when these things happen, I want to understand what that is, and how they are going to go about making sure it doesn’t happen again.

“My concern is that I have these two engines and I want them to make sure they treat them with whatever they can to make sure they both last. If that means not doing a session, I will not do a session. Just let me know what I have got to do. Because I will do whatever it takes to see through the rest.”

Lowe added that the team was “gutted” to have influenced the world championship battle with Lewis Hamilton’s engine failure in Malaysia.

He had hoped that the crucial last part of the season would pass without any mechanical problems costing Hamilton or Nico Rosberg crucial points, and that the title would be decided on performance.

“We’re really gutted to have distorted what we really, really want to be a fair competition across the garage,” he told Motorsport.com. “We work very, very hard to reduce the number of failures we have. We have made improvements year-on-year.

"Actually overall it’s the most reliable we’ve ever been, taking it as a big picture. This is the first DNF we’ve had all year in fact, if you exclude Barcelona.

“It’s something that we’ve worked so hard to avoid, and we’ve been saying for some weeks that as this championship’s squared up for a fairly even final phase what we didn’t want to do is let one driver down. Unfortunately we’ve done that.

"We’re really gutted about that, because it’s interfered in what everybody would like to be a straight competition. That’s the nature of the sport. Ironically one imagines that had he left his Singapore engine in, as Nico did, he would have been fine.”