Following Romain Grosjean’s scary accident in the Bahrain GP, FIA medical car crew members Dr Ian Roberts and Alan van der Merwe have rightly been praised for their efforts at the scene. Their rigorous training and preparation never stops, and on Sunday, it paid off.

However, the modest pair would be the first to admit that they are just the tip of the iceberg on any given grand prix weekend, backed up by the local medics and marshals stationed around the track.

Indeed a Bahraini fireman, a guy whose day job is with the country’s civil defence force, was at the heart of the rapid response that helped to ensure that Grosjean was able to walk away with minor injuries.

The truth is that Roberts and Van der Merwe have been heroes for years, like their predecessors in their roles, performing a vital but largely unheralded task. They are always there, stationed in their Mercedes AMG estate at the end of the pitlane, with a local doctor occupying one of the rear seats.

By definition a good grand prix weekend is one when we don’t notice them, because that means there have been no serious incidents that required their attention.

A former British F3 champion and BAR test driver, Van der Merwe was still an active racing driver when he landed the medical car driving job back in 2009.

Roberts, well known in the sport as the chief medical officer at Silverstone, joined him at the start of 2013. He replaced Gary Hartstein, who had taken over from Sid Watkins – the man responsible for making the medical car such a vital part of any race weekend.

Van der Merwe and Roberts are most visible on the first lap, when they follow the pack around. Had Grosjean’s accident occurred at any other time in the Bahrain event, it would have taken them much longer to get there. Indeed, had it happened later around the first lap, vital time would have been lost.

In fact, Van der Merwe stopped at the crash site just beyond Turn 3 only nine seconds after the initial impact. Roberts was able to jump out of the passenger side and head straight to the fire, just as a marshal – who had crossed the track – arrived with an extinguisher. Initially it was hard to comprehend the scene they found, given the rarity of fire in the modern era.

“We saw the fireball early on, of course,” says Roberts. “But then arriving on scene, the car, well half a car, the rear end, was pointing in the wrong direction. And it was, ‘Where on earth is the rest?’

“We just looked to the right. And it was pretty obvious where it was, with a big gap in the armco. And we could see through, with Romain trying to try to get himself out.” 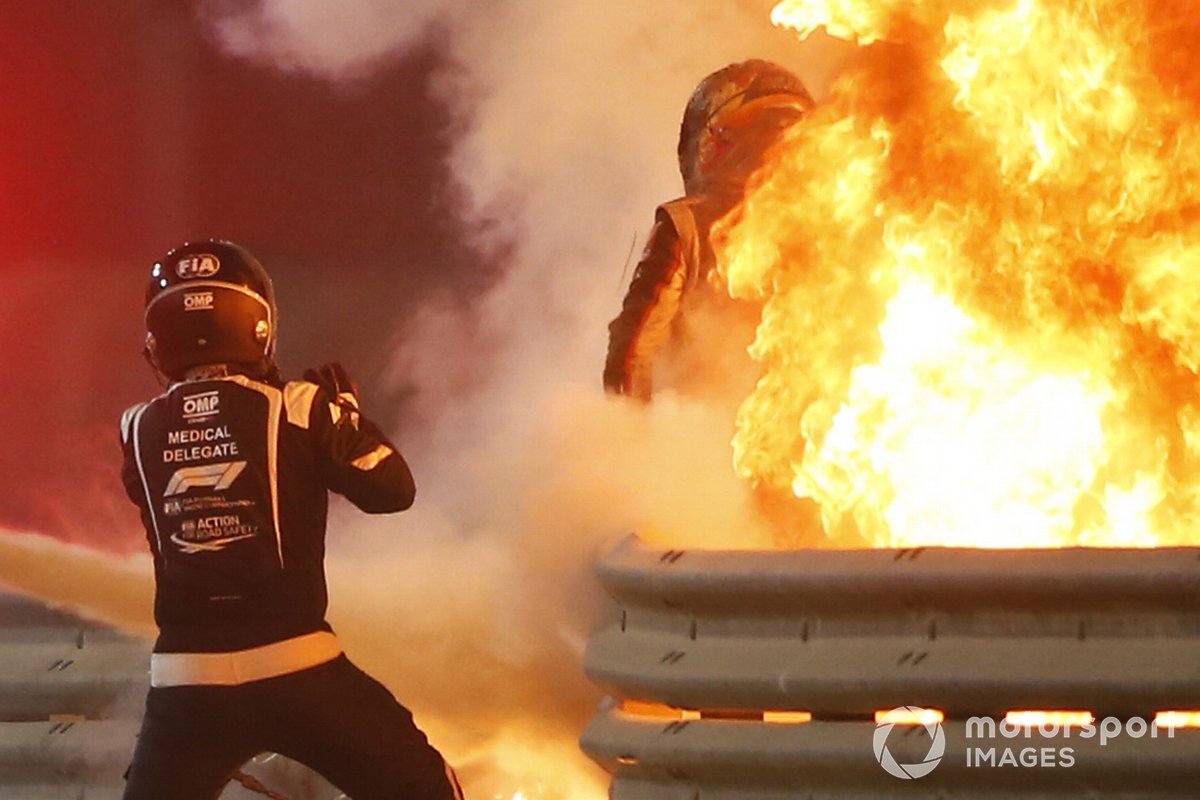 Romain Grosjean, Haas F1, emerges from flames after a horrific accident on the opening lap of the Bahrain Grand Prix. Marshals extinguish the fire

Spotting Grosjean amid the flames was crucial, and Roberts helped the marshal direct the extinguisher straight at the cockpit. That blast allowed Roberts himself to get closer, and in pushing the flames back it may also have given the disorientated driver a crucial chance to see what he was doing as he struggled to escape.

“Not to put too fine a point on it, but it looked like an oven,” says Roberts. “So it was red with flame. And you could see him trying to get himself out, and he was gradually getting himself further and further out.

“But it was how do we get to him? There was a fire marshal pretty rapidly on scene. And that push of the extinguisher, the powder just pushed the flames back enough.

“Once Romain was high enough then we could get him over the barrier and away. But it's a very small window, I have to say because as soon as the extinguisher powder went forward, the flames were coming back pretty soon afterwards.

“That bit was stinging. It's definitely helped my tan! Something melted on me, but I was pretty well protected otherwise. The flame was pretty intense.”

It’s worth pointing out that while he wears racing overalls, Roberts has an open helmet – so he was putting himself at considerable personal risk. He couldn’t just dive in.

“If there's somebody in trouble, you go and help,” he says. “You have to assess the risk. I mean, it would have been daft to try and go in there with the flames coming towards you, so that extinguisher helped, for sure.

“To incapacitate myself, it would have been crazy to do that. It's a balance of risk. I go in when I can, if the flames are coming at me, there's nothing I can do. As much as it's upsetting, you can only do so much.” 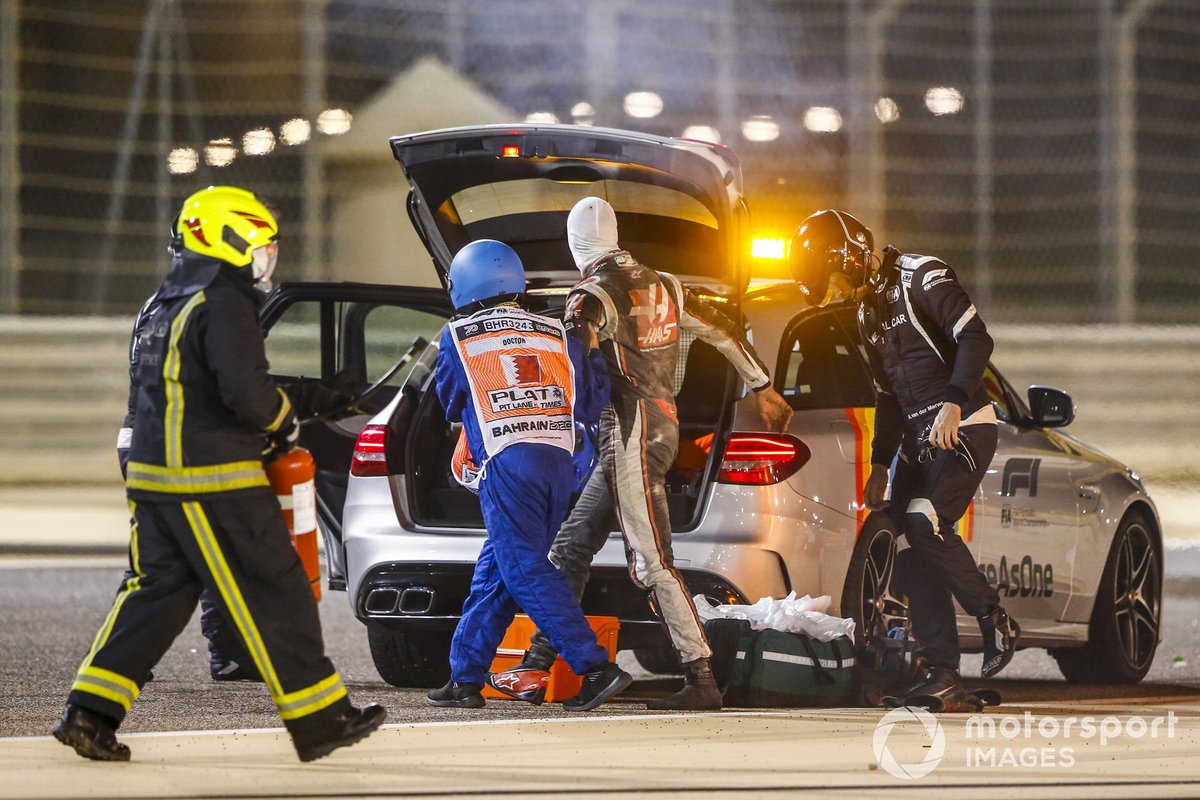 He downplays his actions, but to get so close to the flames, especially with an open helmet, was an act of considerable bravery.

“That's what we're here to do,” says Van der Merwe. “And that's what Ian's been doing all of his life pretty much, rescuing people when they're in a bit of trouble.

“Funnily enough, priority number one is not actually the driver, it's Ian, because when Ian is down, then nothing's going to happen anymore.

“So you kind of have to manage your risk appropriately. Ian runs in there and gets incapacitated, I'm not going to be able to do much.

“There's so many things to balance it to just, to judge within one or two seconds, whether we're waiting for fire support, for some extinguisher support, or whether you're trying to go in. There's a lot there's a lot to decide.”

After Grosjean jumped over the barrier, Roberts was able to lead him to the medical car, while Van der Merwe gave both men a quick squirt of extinguisher powder. Grosjean may have been mobile, but the priority was to check for injuries that might not have been obvious.

“He said that he was in pain from his foot, and from his hands, because as you know, he has some burns on his hands, which are extremely painful,” says Roberts.

“But it was just a matter of getting him sat down briefly, just to check the life threatening things were covered. And then getting him away from the flame. So then, it was into the ambulance and off to the medical centre.

“Of course, I'd have to say that it's not just the two of us, we have a national doctor with us in the car, there's a whole medical team here, a whole set of marshals, fire marshals, rescue people.

“And they all did their bit. If they weren't there, it's not just a two-man show, we work with a team, we work together as a team. So it's important to recognise that.” 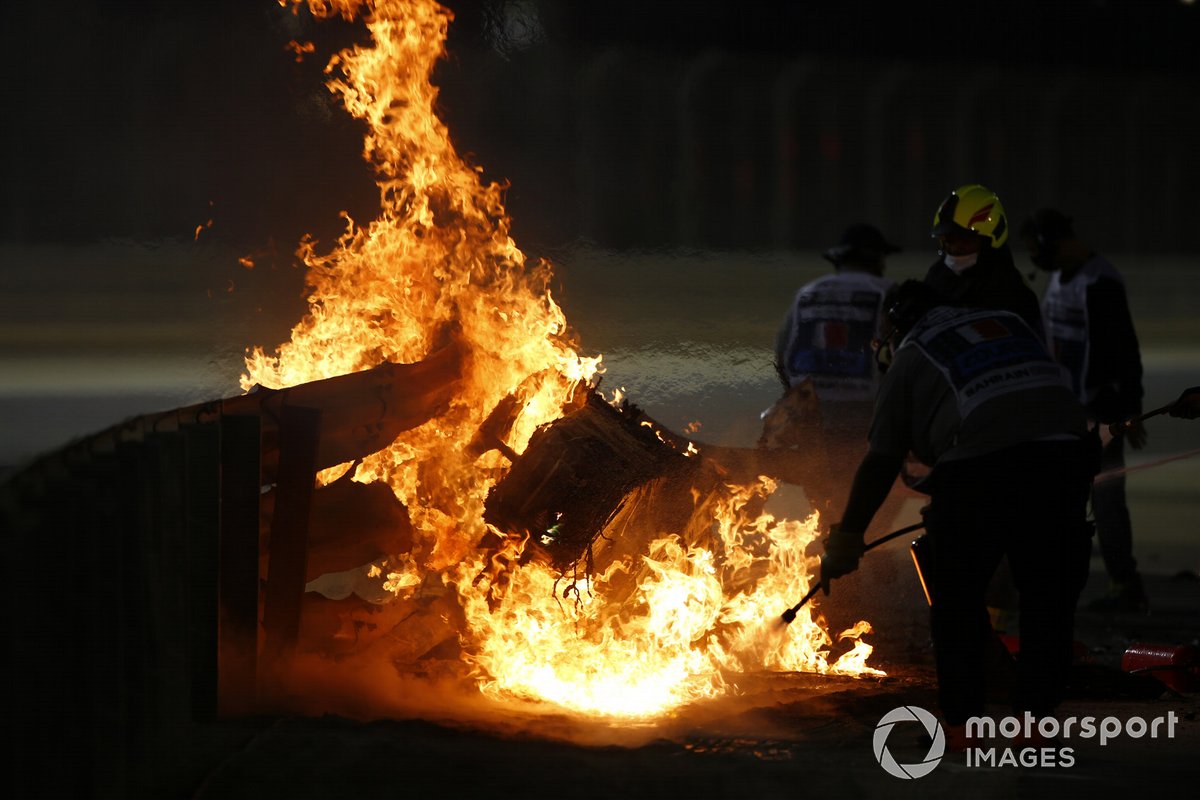 Given the scale of the accident and the fact that debris had obviously passed over the barrier, Roberts also had to ensure that no one else was involved.

“There's always a quick check of the scene,” he says. “And there's always the danger that there might be somebody else across a barrier that you've not seen, it could be a marshal who's been hit by debris, and suddenly somebody says, ‘Where are they?’ And they find them behind a barrier.

“So it's important just to have a quick scan, to make sure. There have been scenarios in the past where for multiple incidents where you really do need to account for everyone.

“We work very, very, very closely with race control, as you can imagine, and with the local teams too. I definitely want to emphasise it's a big team effort.”

It’s worth recalling that Roberts has vast experience in trauma, having worked for many years in HEMS (helicopter emergency medical service).

He’s been at the scenes of hundreds of serious incidents both in his day job and in motor racing, including sadly the Jules Bianchi crash at Suzuka in 2014.

However, he and Van der Merwe are not a fire service, as they are usually not expected to arrive at such a dramatic incident, because in normal circumstances marshals would beat them to it. And yet those hours of training and preparation kicked in.

“So we always talk about cars under barriers, cars on the roof, like Lance [Stroll], flipping onto the roof. We've already talked about that scenario, and what we do in mobilising marshals.

“The same for fire. Go for the extinguisher, and we go in and do what we can, as the fire is being extinguished. No, we're not firemen. We're not fire trained. But we know how to use them.”

“It's important to note that we're not there for the easy ones,” says Van der Merwe. “We're there for the ones that are genuinely novel.

“Nine out of 10 accidents are easily survivable. Everything works as it should, the barriers and all of these things kind of work perfectly.

“Every now and then, let's say once every five years or so, we see something that exceeds the design parameters of what we thought of. And that's what we hit.

“That's why we have 550 horsepower, so that we're there three seconds quicker. And that's why we take all the shortcuts we can.

“And so we're looking for tiny, tiny things, so that if Ian was there five seconds slower, or if he took five seconds to decide, it could be very different.”

Fortunately on this occasion everything worked as planned, with a little help from pure good fortune.

“The outcome was incredibly positive,” says Van der Merwe. “In terms of incidents that we've seen together, this was very much at the top of the list in terms of magnitude of being impressive.” 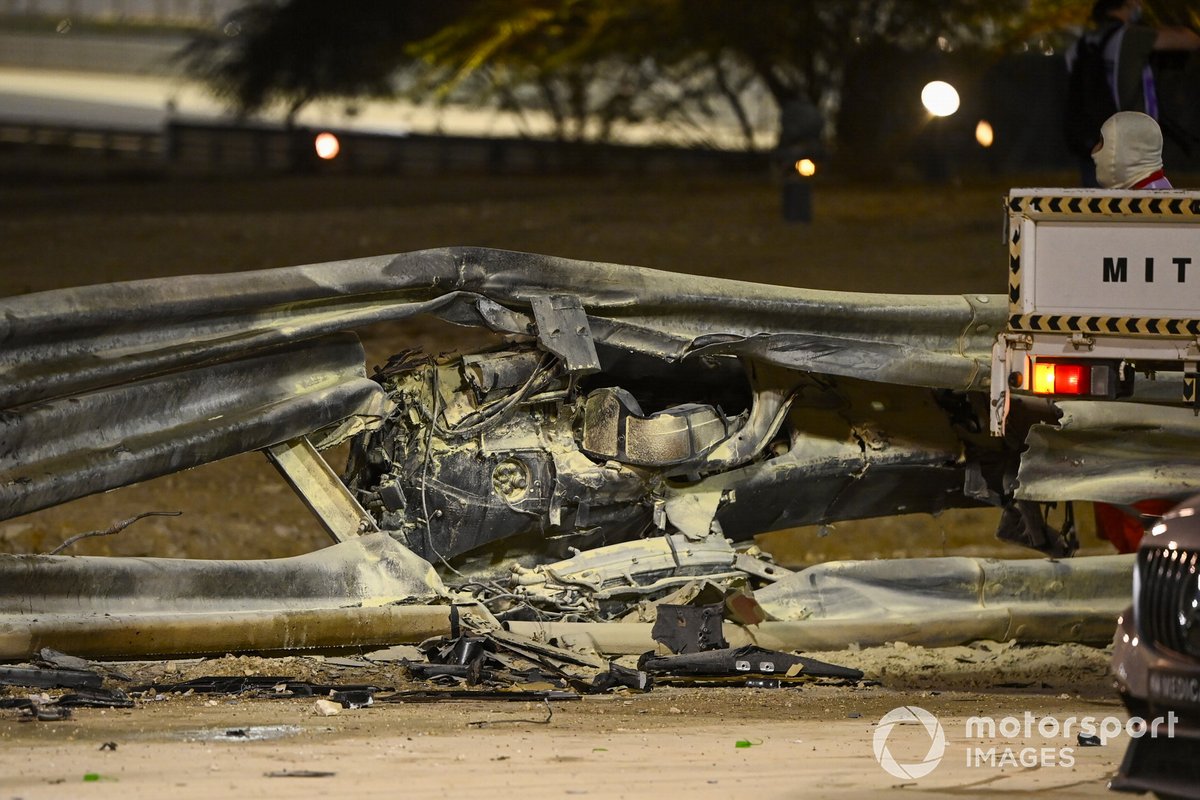