McLaren's rivals surprised by its struggles 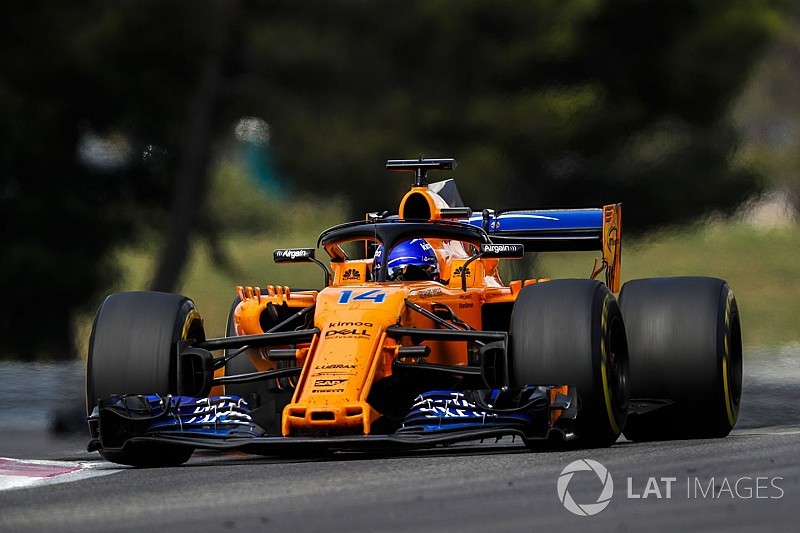 McLaren's Formula 1 rivals have expressed surprised at the team's struggles this season but believe it would be foolish to write off a quick return to form.

Though it started the season with a batch of strong results McLaren has lacked one-lap pace and is is currently on a three-race pointless run thanks to poor performance and reliability.

It hit a new low last weekend when both Fernando Alonso and Stoffel Vandoorne were knocked out of the first part of qualifying last week in France.

McLaren is still fifth in the constructors' championship, behind Renault and ahead of Force India and Haas, but its immediate rivals did not expect the team to struggle this much.

Former McLaren driver Kevin Magnussen said he was "proud" of Haas's results in comparison, with the Dane achieving two sixth-place finishes this season, and admitted: "I am quite surprised.

"When I was there it was very clear it is a great team, a very big team and beautiful team. It is a shame for sure.

"I am happy for us that we can compete with them and beat them at times but it is not where they belong."

When Renault agreed to supply McLaren with engines for 2018 it had targeted the multiple championship-winning squad as an immediate benchmark for the progress of its own works team.

However, Renault's R.S.18 has proven superior to the MCL33 and Renault now has a 22-point lead over McLaren in the fight for fourth.

Nico Hulkenberg admitted he was "a bit surprised" by McLaren's "ups and downs".

"In qualifying they are not so strong as on Sunday," he said. "Actually, I had expected that they are stronger on Sunday in France, but they weren't.

"They are not as strong this year as I would have thought."

McLaren introduced a major aerodynamic package in Spain, where it made it into Q3 for the first time, but has not brought big upgrades since and has slipped back.

Hulkenberg's teammate Carlos Sainz said: "I think we are especially [surprised] after the strong weekend they had in Barcelona.

"In Formula 1 you never know, suddenly they found a small issue and they are back on pace here and we need to wake up again.

"It's strange, but that's something that always happens."

As McLaren has fallen away from Renault in the constructors' championship, Force India and Haas have closed in.

Force India has scored 10 points during McLaren's point-less streak and now only trails it by 12, but its driver Esteban Ocon echoed Sainz's warning not to dismiss McLaren as a threat.

"To be honest, yes," said Ocon when asked if he was surprised by McLaren. McLaren were not competitive [in France], we were expecting to be fighting with them but it was not the case.

"You can't underestimate McLaren, I'm sure they will be back."

Defending his team on Thursday ahead of the Austrian GP, Alonso repeated his post-France proclamation that it was not as bad as it looks.

"The pace for the whole first stint was very similar to Sainz and Magnussen, which was definitely not on Saturday, when we were 1.5 seconds behind them, so on Sunday again we did improve a lot," he said.

"But again, if you look only at the results, we were out of Q1: 'Let's blame McLaren'. On Sunday we are out of the points: 'McLaren is very bad'."