McLaren's final 2016 package will only appear in Australia

McLaren's final 2016 race package will now not make its first appearance until the Australian Grand Prix, after the latest parts failed to be readied in time for this week's final test.

The Woking-based had hoped to run the latest specification of its wing, floor and nose at Barcelona on Friday, but only a few of the parts were actually signed off in time.

Racing director Eric Boullier confirmed that McLaren is not yet running its definitive 2016 package.

"We are not running the full 2016 spec here, because we are a little bit behind the programme," he said.

"It means we are going to turn up in Australia with more bits on the car, which unfortunately have not been signed off here. But this is what it is."

Although the new parts did not make it in time, Boullier insisted that there was no major problem that had made it miss the schedule.

"Everything is fine. We just miss by one day unfortunately, so that is it. It happens some times – we are trying to stretch and be on the edge.

"We wanted to give the maximum time to the aerodynamicists to develop the package and then you have to compress the lead time on the production. Then, something happens and you are behind.

"It is nothing wrong, no drama, no stories. It happens every day, every race, to be honest."

Despite not getting to evaluate the latest parts, Boullier still reckoned it had been a positive fortnight for McLaren, as it has been able to complete a decent amount of running.

"I think we have been able to run at least most of the days, which is very good news," he said. "In terms of the chassis it was important that we could go all the way through the systems, which we couldn't do last year.

"So for us, it is a good achievement and I think now we have a reliable car to start the season. So we are definitely more confident, and I think there will be more to come now

"The base looks okay and there will be much more performance in the coming weeks." 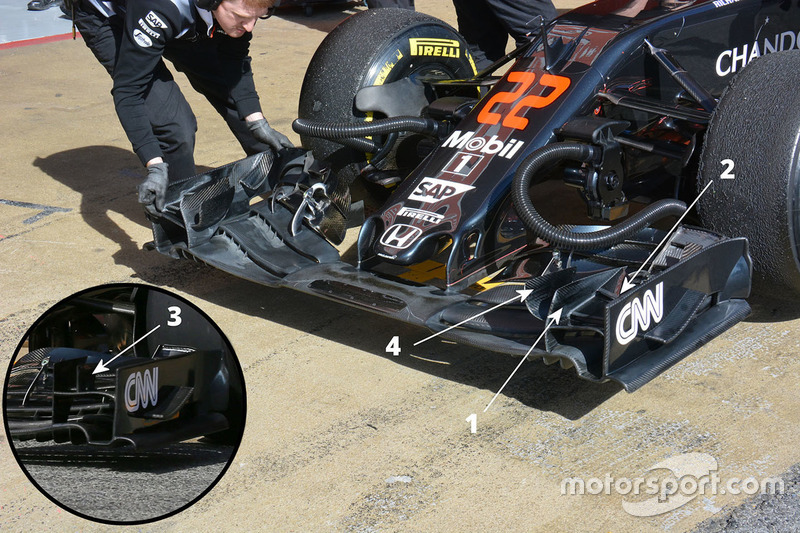 McLaren unveiled a new front wing on this last day of the pre-season test, which features changes to the cascade elements.

The shape of the main cascade element has completely changed, with the inner endplate [1] and flaps [2] dramatically curved in order to entice airflow to move around and over the front tyre.

Furthermore, the 'r' vane [3] that used to sit within the main cascade has been removed completely.

Another, larger, more shapely, 'r' vane [4] has sprouted from the main cascades endplate too, which is reminiscent of the design used on the Toro Rosso.

This vane will also turn airflow outward but being further inboard it is about shaping how the airflow moves across the front face of the tyre.

These changes point to a concerted effort by McLaren to change the shape of the tyre's wake further downstream, improving the performance of the floor.

Following yesterday's running, with kiel probe arrays mounted behind the front wheels, the team is conducting the same tests today, as it looks to correlate its data between the two front wings to ascertain whether it is getting the desired effect. 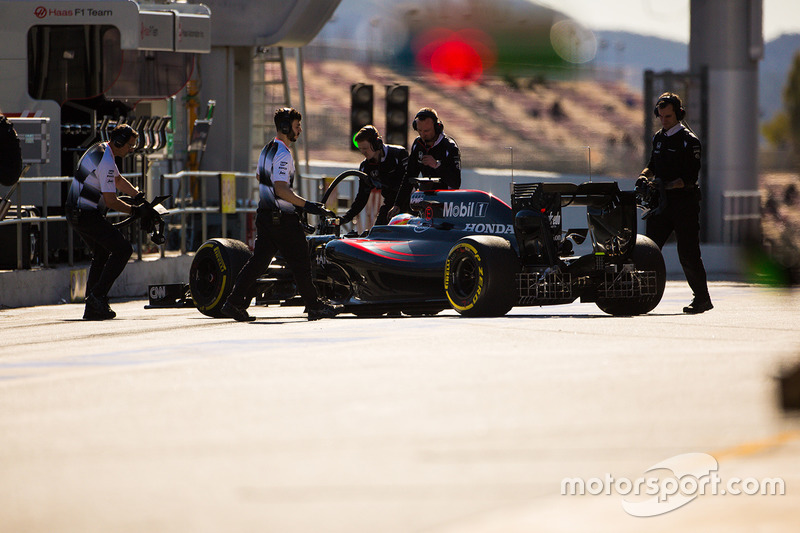 At the rear of the car, McLaren has made some changes to the diffuser and much like the front, it has been doing correlation work with kiel probe arrays too (above).

The vertical strakes (the left bank, marked in yellow) which align airflow within and assist in creating the diffusers volume in yaw have been amended.

Their shape and angle have been slightly revised but more importantly rather than falling short of the diffuser trailing edge, they now meet with it. 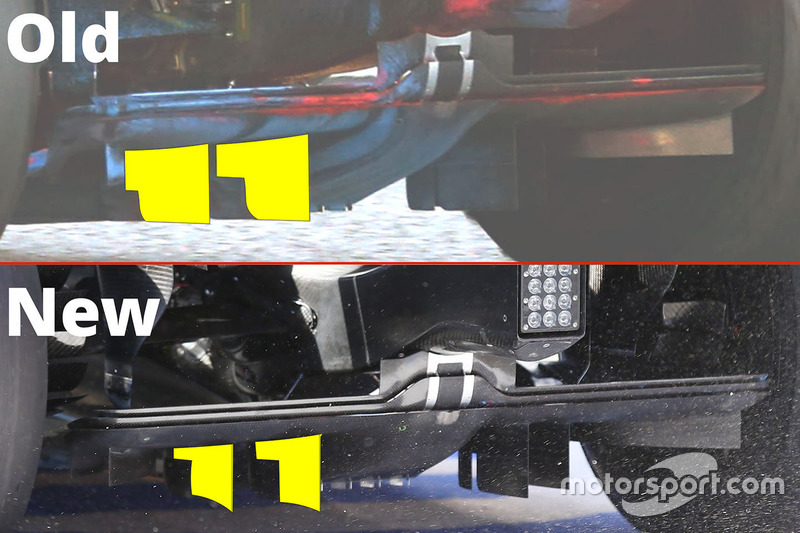