McLaren: Norris "unlucky" to lose fifth in championship to puncture

McLaren Formula 1 boss Andreas Seidl says Lando Norris was "unlucky" to lose his shot at fifth place in the drivers’ championship after a late puncture in the Abu Dhabi finale.

Norris had scored only five points in the previous four races after a string of frustrating Sundays, including a tyre failure in Qatar.

After the Jeddah race he slipped from fifth to sixth in the championship, four points behind Charles Leclerc, and four and half ahead of Carlos Sainz.

In Abu Dhabi he qualified a strong third but lost out on the first lap and slipped to fifth place. However that stage was still on target to jump Leclerc, and claim fifth in the championship.

His fortunes changed when with 10 laps to go he was called into the pits after the team detected a slow puncture. He subsequently recovered to finish seventh.

While Norris did ultimately outscore Leclerc by one point, both men slipped behind third-placed Abu Dhabi finisher Carlos Sainz in the points table, and thus he remained in sixth overall.

"We were in a good position to score this P5 in the drivers' championship," said Seidl.

"Because we were close enough to Carlos, and there was no need to try more, because it was a tricky race in terms of tyre management as well.

"Charles was losing more than four points to Lando, and therefore we were in a good position.

"And then he had an unlucky puncture, there was nothing we could do. That's why we stayed in P6 in the drivers' championship. We have overtaken Charles, but Carlos had that big result. So unlucky." 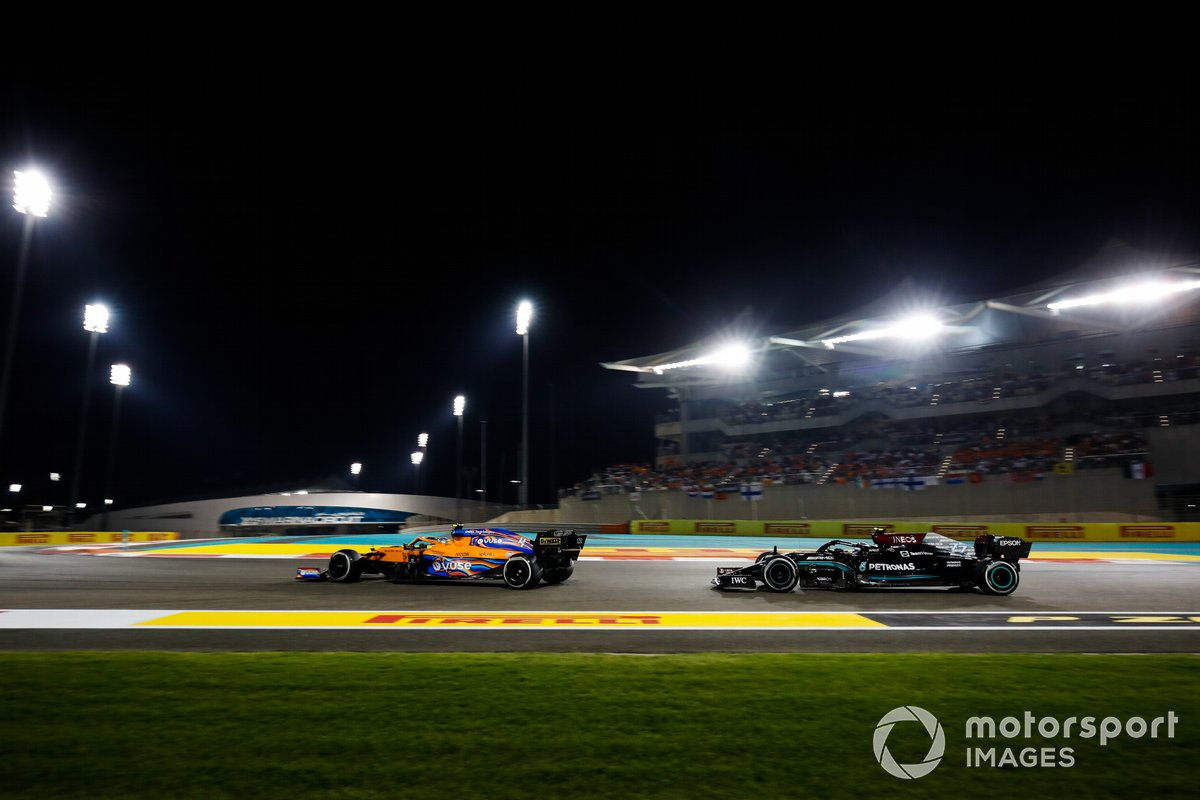 Seidl said that there was no connection to the Qatar tyre failure.

"In Qatar it was a structural failure of the tyre due to the loads the car has seen with the kerbs. So a completely different issue compared to what we have seen today.

"Today we have seen a slow puncture. Where we need to see now when we do the analysis together with Pirelli was it from running over debris, or something like that? It was not a structural issue, just bad luck."

Seidl added that Daniel Ricciardo's low-key run to 12th place in Abu Dhabi was an inevitable result of the Australian having a disappointing qualifying session:

"On Daniel's side, I think we couldn't show the pace because he was just stuck in the train behind I think [Esteban] Ocon for most of the race, which is the problem he's time-to-time having in terms of the final position in qualifying, which puts him in a bad spot for Sunday.

"Because as we know a Formula 1 race nowadays with these cars on tracks like here if you're not a lot faster than the car in front of us it's difficult to overtake and your race is pretty much done from the start.

"And with Daniel not being able to make up positions at the start or in the first lap his race was pretty much done, unfortunately."