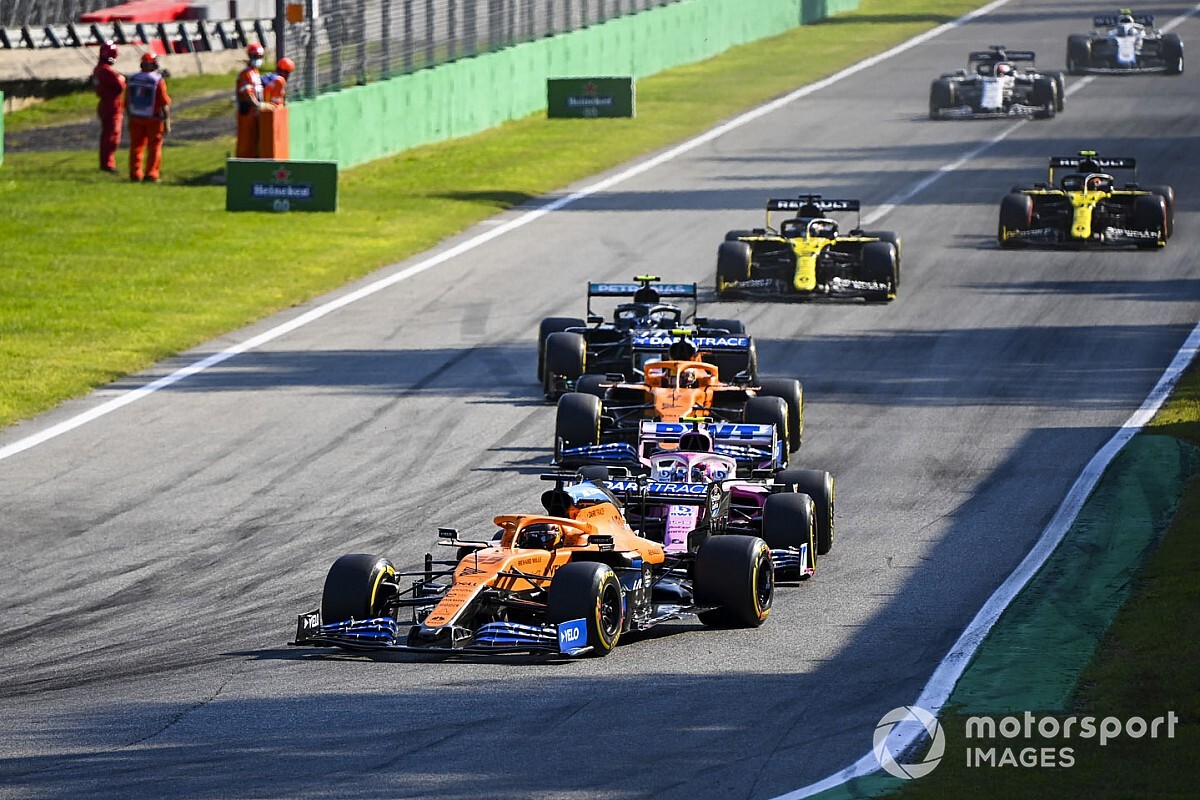 Andreas Seidl says that McLaren was second-only to Mercedes in terms of competitiveness in the Italian Grand Prix – and could have got an even better result in a “normal” race.

McLaren scored the most constructors’ points (30) at Monza, outscoring race winners AlphaTauri by three, as Mercedes recorded a season-low 17.

In a dramatic event – impacted by a safety car and a red flag – Carlos Sainz finished a close second to Pierre Gasly, while Lando Norris crossed the line in fourth. In the early laps, Sainz and Norris ran second and third behind the Mercedes of Lewis Hamilton, and Seidl says that they would have finished in those positions without the outside influences on the race at the front.

“A very short period of disappointment,” said Seidl when asked by Motorsport.com if he had mixed feelings about losing out to Gasly and AlphaTauri. “We go away from here with a lot of positives, because in the end today we scored some very important points for the constructors' championship.

“And I think the most important thing from today is that we actually had a very competitive car, and behind the Mercedes I think we can say we have been the second strongest force today, which was great to see. And again, another great confirmation that we made a good step forward with the car in the winter.

“Then also when I look at the execution of the race today by the strategy team guys, it's clear to see that we also made big improvements on the team side. We obviously have again seen today that we have two heroes of the sport in our car, two sensational drivers that did everything right at the start, at the restarts, and put in a sensational performance.

“Great to see also how the race team here under the leadership of Andrea Stella, working together with James Key on the development side in order to keep pushing and steering the direction of the development. The guys back home under the leadership of Piers Thynne, and the production side. They give it all to make sure they deliver the parts as quickly as possible. Very happy, I have to say.”

He added that even if Valtteri Bottas had not suffered problems and lost performance the orange cars had the pace to finish third and fourth, beating everyone else.

Regarding the car’s pace, he said: “I think what was simply good to see is that with a normal race, I think – if Valtteri wouldn't have had a problem – we were definitely in a position to get a P3/P4 today. Or after the problem from Valtteri, I think we would have or could have finished in P2/P3, which is obviously a very encouraging sign going away from here, and looking ahead now in the second half of the season.”

Seidl said the car worked simply well at Monza, having been fast at Spa the previous weekend.

“I think we have seen in Spa already that the low downforce package was competitive,” he said. “But I think with the track here in Monza where you run even lower downforce, plus the combination of the corners here, the characteristics of the corners, I think it was hitting somehow the sweet spot of the car, where we could use a lot of strength that the car has.

“It's encouraging to see that our car seems to be competitive in all kinds of circuits. We're always able to get into Q3, we're always able to fight with the cars around us, which is good, and gives us a lot of optimism also now going to Mugello and to the races afterwards.”

Seidl said it was too early to judge how the engine mode regulation had impacted the race in Monza: “Difficult to say. I think we need to wait now for the analysis of the experts in each team. I think we need to be careful not to jump to conclusions too early. In the end with what we have seen for example today it just makes a huge difference if you're running in free air or dirty air. Because I think we clearly had a quicker car than AlphaTauri all weekend. The gap is not huge.

“And this is why we also could get closer to Pierre towards the end of the race, but then it's obviously a different story as soon as you are in the dirty air to get close enough to get into the DRS which we didn't manage until the last lap, despite Carlos putting everything in he had.

“Would it have been different with the old kind of engine modes where you can adjust settings, I don't know, difficult to say at the moment. But we also have to say congratulations to AlphaTauri and Pierre Gasly. They did a great job today, and in the end they deserved to win this race.”