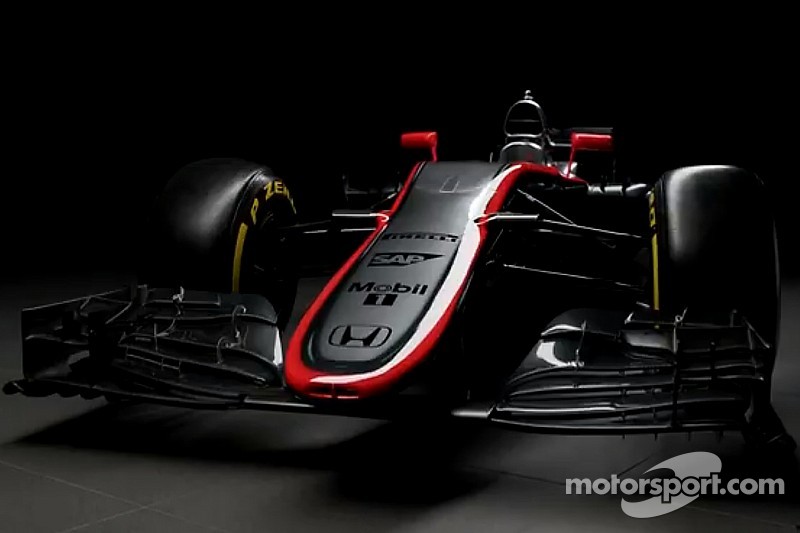 McLaren has unveiled its first Honda-powered Formula One World Championship challenger since its early-1990s glory years, upon which former champions Fernando Alonso and Jenson Button pin their 2015 hopes.

The car, which retains its silver, red and black livery despite rumours to the contrary, has a very pronounced slope to its nose section, and does not feature the protruding tip as we've previously seen on the 2015 Williams. It also sports the highly-intricate front wing assembly that was implemented after the arrival of incoming aero expert Peter Prodromou from Red Bull towards the tail end of last year.

The desire and commitment is there from everybody to win again ... I visited in Japan the facilities of Honda in Japan, I was very impressed

Honda becomes the fourth engine manufacturer to enter the fray of the new hybrid-turbo engine-rules generation – a year behind its rivals Mercedes, Renault and Ferrari. It will hope that early reliability problems encountered in testing at Abu Dhabi at the end of last year can be overcome in this week’s upcoming Jerez test.

Honda’s last F1 win with McLaren came in the 1992 Australian Grand Prix with Gerhard Berger. Between then and the 1988 Brazilian Grand Prix, won by Alain Prost, they won 44 grands prix in total together.

Honda 'dedicated to the cause'

Technical director Tim Goss, who took over from Paddy Lowe last February after he defected to successfully mastermind Mercedes’s title success, has masterminded the MP4-30’s gestation.

“The chassis is much tighter, Honda has done a fantastic job of just trying to package everything in such a tight space,” said Goss. “Honda are just so dedicated to the cause, I think they took it to a new level in the Nineties, and they’re absolutely committed to doing the same again.”

But it’s not just Honda that has to prove its worth this year – McLaren had the best power unit on the grid last year in Mercedes, and yet only scored two podium finishes in the season-opening Australian GP.

“Our car looks really well packaged this year, I think with the Honda engine we’ve done a really good job,” said McLaren’s engineering director Matt Morris. “These engines are very complicated, a lot of electrical and electronic hardware that runs in parallel with the internal combustion engine.

The return of Alonso

Alonso returns to McLaren after a tumultuous 2007 season, during which he arrived as world champion and left under a cloud to return to Renault – and was also embroiled in the ‘spygate’ controversy that cost McLaren a $100million fine.

“The desire and commitment is there from everybody to win again,” said Alonso. “The McLaren-Honda project has the desire to be the best in Formula One. When I was a child, a go-kart driver, I saw on TV the battles between Senna and Prost in these famous McLaren-Honda colours, a domination of that period of F1. I grew up with those idols, and now I have the honour and the privilege to be part of this new era of McLaren-Honda.

“I visited in Japan the facilities of Honda in Japan, I was very impressed, and both are putting everything together to have another successful partnership. They know what it takes to succeed. The expectation is very high, so we need to deliver something good. But we know how complex it will be, especially at the beginning.”

Silverstone sells fast as fans flock to snap up £99 tickets