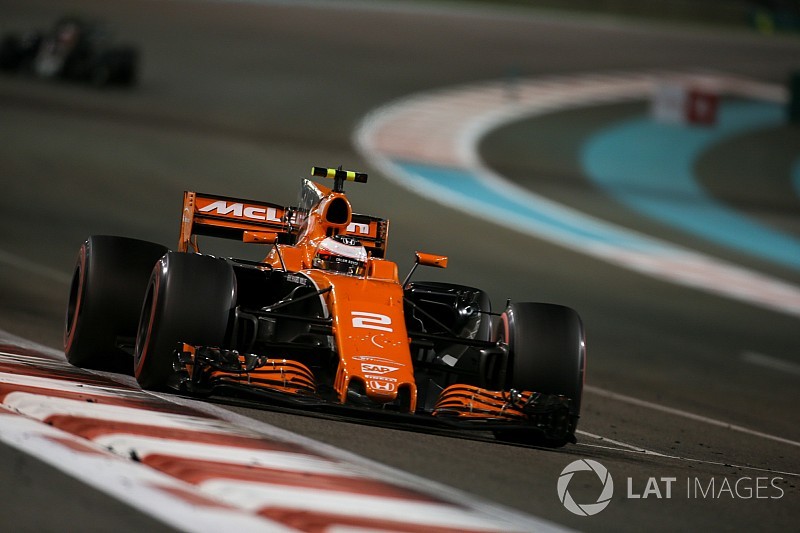 Stoffel Vandoorne's dire handling problems in the Abu Dhabi GP were caused by a section of tape picked up from the circuit that became caught in the diffuser of his McLaren.

The Belgian complained of a handling issue from early in the race, and was heard on the radio discussing ways of resolving it.

After the race, he reported that his MCL32 had "felt like a rally car," and assumed that he had picked up some sort of damage.

He finished 12th of the 18 classified runners.

However, when the team received the car back from parc ferme, an inspection revealed that a section of black tape – of a type not used by the team itself – was lodged in the diffuser, where it would clearly have cost downforce.

"We think that Stoffel spent the whole race with a large piece of tape stuck in the diffuser," Vandoorne's engineer Tom Stallard told Motorsport.com.

"The kind of super-sticky two-inch tape that touring car teams use to reattach the front bumper. At the end of the race there was a 20cm piece still stuck to the left hand diffuser fence.

"During the race we believe this tape was much larger. We measured a loss of downforce equivalent to opening the DRS, but all around the lap, and without the drag drop.

"Also the loss on the diffuser was symmetric, but at the end the tape was only on the left hand side.

"Around lap 22 the diffuser partially recovered and Stoff's pace improved. We think until this point it was caught on both sides, but then snapped and was then only on the left.

"I would guess the original piece must have been around 50cm long."

One of Vandoorne's rivals was able to provide the team with further evidence: "Pierre Gasly, who was behind Stoffel in the first stint, said the car was incredibly oversteery, and also that he could see something flapping in the diffuser.

"Given this I think Stoffel did an extraordinary job in not only keeping his car on the track, but also in keeping six cars behind him."