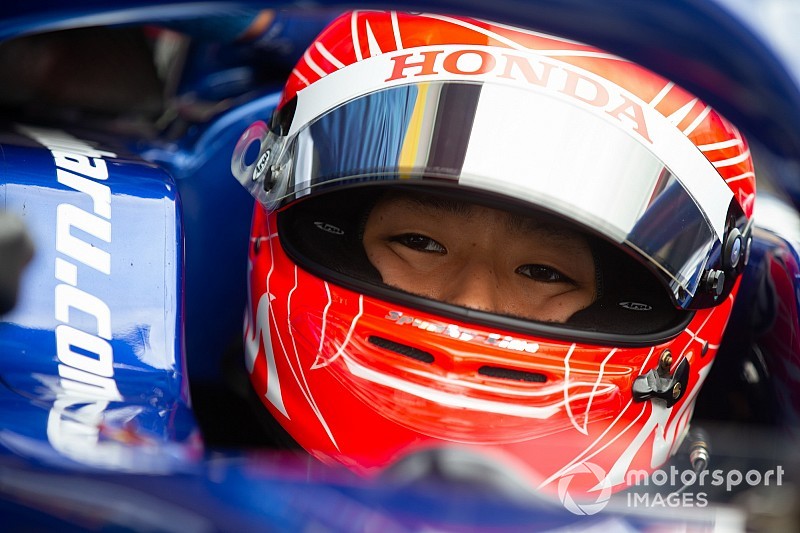 Matsushita returned to F2 at the start of 2019 after a year away in Super Formula, having received Honda’s blessing to revive his F1 bid.

Honda has made clear its desire to place a Japanese driver in F1 with either Red Bull or Toro Rosso, and Matsushita is currently its best short-term bet unless Naoki Yamamoto - who has the required superlicence points - makes a shock move to grand prix racing off the back of an expected free practice outing later this season.

Matsushita currently sits seventh in the F2 drivers’ standings but has set his sights on improving to fourth by the end of the season, the position required for him to reach the 40-point threshold required for a superlicense.

“Yes, I think so,” Matsushita told Motorsport.com when asked if a future in F1 is still in his hands. “You know, if I manage to get points, I will have a chance for sure.

“[Honda] keep supporting me, and obviously I need to make results, that’s the key. But they are wholly supporting me.

“My goal is to be fourth in the championship. I mean, third or fourth, because I need to get superlicense points, so... I am a bit behind now, but there are four races to go, so I will push as much as I can to get superlicense. That’s the goal.”

Matsushita endured a difficult start to his second stint in GP2/F2, scoring just six points in the first three rounds, despite a pole position.

However, the Carlin driver has enjoyed improved fortunes since then, with a feature race victory at the Red Bull Ring and a pair of second-place finishes at Monaco and Hungaroring lifting him up in the standings.

The 25-year-old admitted that he struggled to adapt to the new F2 car at the beginning of the season, and still needs to make small gains to prove himself worthy of an F1 seat.

"But always I had the pace, so if I put everything together on one shot, I knew that we will be there. And then mid-season we did a good job, I think.

“Still some mistakes from my side, so I'd like to put everything together for the rest of the season. Actually I did a mistake in qualifying [in Hungary] last lap, last corner – otherwise I would have been like P3 or P4. These kind of things [I need to improve].

"We need to put everything together, one shot. Bang. That’s what Formula 1 drivers do. So if I want to go there, I need to do that.”