Massa column: Why F1 drivers are struggling with starts 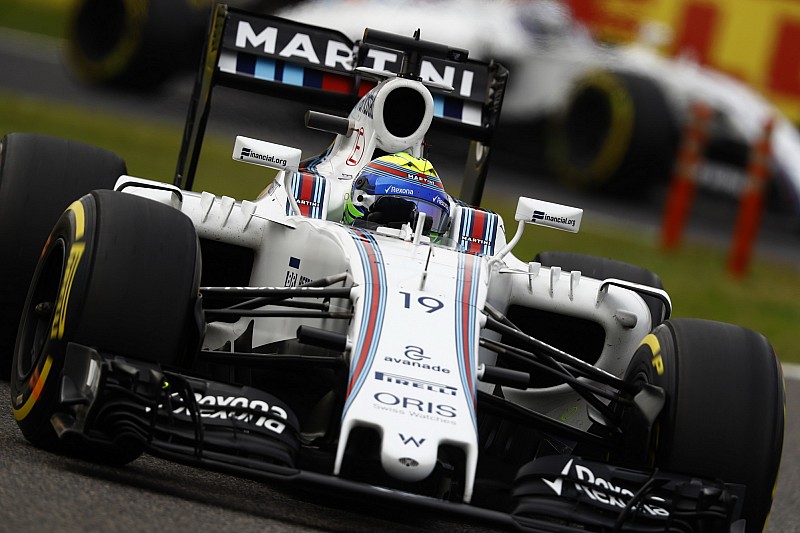 In his latest column, Felipe Massa reflects on the Japanese Grand Prix and explains why F1 drivers are struggling to nail starts like before.

The Japanese Grand Prix weekend was one that at times seemed very difficult, but in the end Williams Martini Racing still managed to get some important points for the world championship.

Achieving that had been far from certain before the start of the race, considering that on Saturday we had not been able to make it through to the Q3 session.

After qualifying, though, we decided to focus on a one-stop strategy. From the data we had at our disposal, there were a few unknowns about making a one-stop work but in the end it was a key decision that helped us move forward in the race. There was a chance for it, and we exploited it to the full.

There were some downsides to the decision, because starting on the medium tyre meant we lost a couple of places at the start – because you do not get as good traction as you do with the soft. But immediately after that, the pace was good.

Of course, over the first stint we lost a little bit to the other cars who were running on the soft tyre, but once we switched to the hard then our pace was competitive. We were able to run consistently good lap times, and we were able to recover the ground we had lost earlier to get in to the top ten.

It was not easy managing the degradation, but we managed to contain the late assault from Romain Grosjean – who came up behind us with fresher tyres in the closing laps. However, both myself in ninth place and teammate Valtteri Bottas in 10th we able to hold out.

With four races remaining until the end of the world championship, I do not think we will see great variation in terms of the form of the teams.

Austin, Mexico City, Sao Paulo and Abu Dhabi are tracks that are not as radically different as say Monza or a street circuit – so I think the performance we saw in Sepang and Suzuka will carry through until the final race. That is especially true because I do not think there will be many technical developments either.

The differences will come from the weather, strategic choices of even incidents on track – so we need to be ready to take every opportunity until the end of the season if we are to win our battle with Force India for fourth place in the constructors' championship.

One area that continues to look really decisive is the race starts, and we have seen how important that is in the world championship battle between Nico Rosberg and Lewis Hamilton.

These days it is much easier to make mistakes – because in the past we had two clutch pedals and the ability to make adjustments on the formation lap. The engineers would be reading the value of the real-time traction from our practice getaway, and then would tell us over the radio what settings needed to be used.

Since the technical regulations changed this year, the procedure has become more delicate, because it is the driver who needs to work out how to adjust the settings himself.

At Monza, for example, I made the classic burnout prior to lining up for the start and I knew that there was very low grip – judging by the great amount of smoke that had been generated by my rear tyres.

So because of that I decided to be very cautious in releasing the clutch, and when the lights went out it worked really well. I saw several of my opponents get wheelspin.

One of the other difficulties is that after doing so many practice starts at the exit of the pitlane over a race weekend, you find that the grip level is different on the asphalt on the grid.

It is why drivers still make mistakes, and I think this year every driver has got it wrong as least once. Rosberg has done well, and there are drivers who can manage and understand a little better the grip levels that are out there.

And as the start in Japan showed you, it is an element of the race weekend that can make all the difference.

Opinion: How memories of Lauda joke show exactly what F1 is missing