Massa 'calm' about future beyond 2013 contract

Massa is happy with his current situation

Jun.11 (GMM) Felipe Massa says he is relaxed about his future at Ferrari because he remains the best candidate for the famous Italian team.

"If Felipe keeps going as he has been, I do not see any problem for the future," he said. 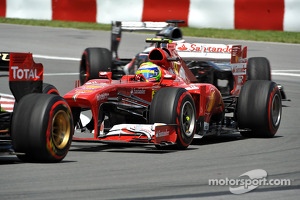 Massa told Brazil's Totalrace that he is happy with his current situation.

"I am calm, I think the most important thing is to have good pace," he said, amid speculation his three recent crashes in Monaco and Canada might have hurt his bid for a new contract.

"I'm feeling good in the car. I'm very upset with what happened with the tyres in Bahrain, and with the crashes I have had," Massa admitted.

"That has hurt my points a lot, but I'm happy with the car and with my driving, and that's what counts the most," he added.

Massa said he could only imagine Ferrari making a driver change if there was a clearly better candidate on the market.

"In my opinion, if there was someone so much better to put in my place, okay," he insisted.