Several Formula 1 drivers have called for changes to the Jeddah circuit after safety concerns arose during the Saudi Arabian GP weekend.

However, FIA race director Michael Masi anticipates only "fine-tuning" being required ahead of the next event at the track in March.

Drivers mainly had reservations about the lack of visibility of potential trouble ahead in the many flat out sweeping bends, with some questioning why the circuit design didn't simply feature more straights.

GPDA director George Russell argued that the fast bends created "unnecessary risks" while not offering a challenge, and others echoed his thoughts.

"I don't know what are the limitations on building, because there must be a reason why the straights are turning like this," said Esteban Ocon.

"For us it's flat out so it makes no difference. It's just that it makes it blind and we can't see if a car is a problem in front or whatever. So, it could be a massive crash."

Ocon said he liked the first part of the track but added: "All these straights afterwards, that are not straight I think we should make them straight basically.

"We would have less worry about the slow flag car. Every lap I had in practice there was a slow flag so I didn't know what I was going into." 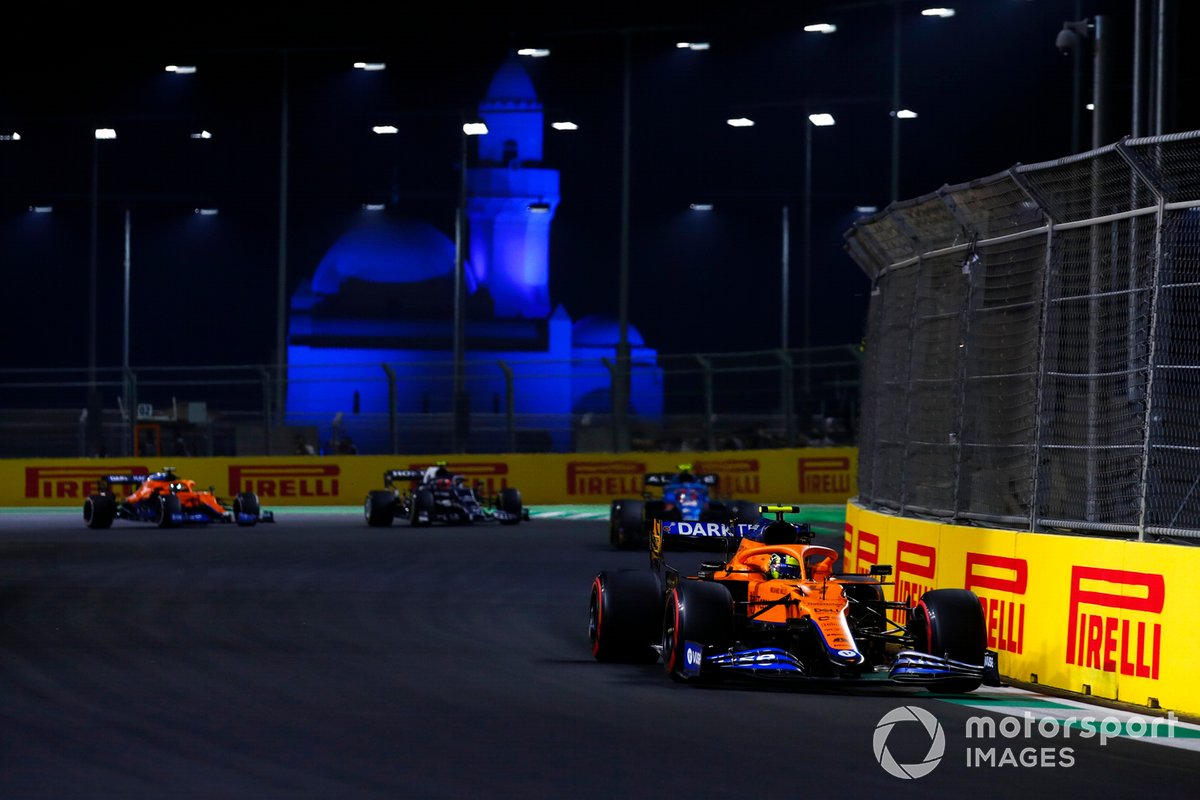 Lando Norris was another to question why the track had to be so fast.

"For a street circuit I just don't think it needs to be like a street circuit at this speed," said the McLaren driver. "I think the F1 cars we have, the speeds we do nowadays, it's not needed to be quite like this.

"You can have the effect of a street circuit and so on, but they need to realise if we're doing 250/300 km/h, and there's a wall from here to there away, it's a bit pointless from my point of view to risk that kind of thing.

"That's not needed. The slow speed and Turns 1, 2, 3, 4, 5, I don't think there's any problems with that. It's just some of these quicker corners that I think maybe can be altered slightly."

The FIA always reviews circuits after race weekends, but Masi does not expect major changes.

"I think here in Saudi Arabia they've done a brilliant job of putting this amazing facility together in such a short time frame, which is a credit to everyone involved," he said.

"There is some fine-tuning, that will happen across the board. There were some teething issues being a brand new event, brand new facility, on the whole of things.

"There'll be some fine-tuning but nothing in a major way that I envisage here and now."

Team bosses acknowledged their drivers' concerns but stopped short of criticising the venue.

"The first time I walked Baku I was working for the FIA," said Alpine's Marcin Budkowski. "And I walked it on a Wednesday and I went to Charlie [Whiting's] office and I said, 'Are you sure about that Charlie? You moderated this'.

"I had a little bit of the same feeling on Thursday night. I feel like it's fine, there's a couple of corners that are a bit tricky, but that's something that can be looked at in 2022/23.

"You can talk about it with the driver after the weekend's passed, you don't really ask the driver if they feel safe before the race weekend, that's not really the best thing to do. It's certainly a challenging track."

"When you listen to the drivers when they drive the fast laps here, it is clear that the certain amount of risk is involved as well with the walls being so close and with the track layout how it is here," said McLaren's Andreas Seidl.

"I still think it's a risk that is manageable, to be honest. Of course like Lando said also, when a big accident happens we all will discuss it differently.

"But I think ultimately what we have seen this weekend was well managed I think by the teams, by the drivers, by the FIA."