Six months after Liberty Media's Formula 1 takeover, market research has become key. Kate Walker talks to market research experts Nielsen about the state of the sport and how to reach the casual fan.

Market research has become something of a buzzphrase in the Liberty era of F1, with the sport’s new owners making a concerted push to not only better market the sport itself through events like July’s F1 Live event in London, but also to use research to extend F1’s reach beyond its core fanbase.

Nielsen Sports is a global leader in researching consumer behaviour, media consumption, and related data analysis, and Motorsport.com spoke with Samantha Lamberti, head of motorsport for Europe, and Nigel Geach, SVP of global motorsport for the company, to get their view on how best to expand grand prix racing's appeal.

When the Motorsport Network launched the global fan survey at the start of the 2017 F1 season, it was Nielsen who worked with the company to verify and analyse the results.

The news was good. While a 2015 survey had shown that even hardcore fans were feeling dissatisfied with the sport, the more recent survey showed a sport in improving health.

F1 in 2017 is seen as “more exciting, competitive and prestigious; it is also less boring, corrupt and threatened” than fans believed it to be two years ago. It was listening to that passionate base that drove the increased openness we are seeing today.

The 2017 survey was a comprehensive one, securing more than 200,000 responses from 194 countries, and showed that F1 was experiencing a positive turnaround in public perception. But, as Geach explained, the very nature of a 20-minute survey is self-selecting to a certain degree.

“One has to be a little bit careful,” he said. “On the survey we were talking to fans who follow Formula 1 through thick and thin.

"One very interesting group of fans are the casual buyer, the social buyer, the person who’s dropped off the cliff for one reason or another and I think that’s where social media is a tremendous opportunity.”

Pre-season testing saw the sport’s new owners begin to relax rules about posting content to social media - where previously all forms of video content had been banned for all barring the fee-paying broadcasters, from February this year teams and drivers have been encouraged to produce Snapchats, Facebook Live feeds, and Instagram Stories from the paddock, giving fans glimpses of life behind the scenes in F1.

The sport’s official YouTube channel and Facebook page have been hosting video clips of race weekend highlights both on track and off, bolstering the sport’s online presence and providing the curious with access to moments they might have missed.

And it is these curious individuals that the sport needs to court if it is to grow its fanbase under Liberty.

“It’s important to get to those people who are interested in music, in entertainment, who love going to live concerts and events,” Geach said. “You’ve got to somehow link those people to Formula 1, and social media is a way of doing that.”

Part of Nielsen Sports’ wider remit is global surveys aimed at casual consumers, not die-hard fans, to establish what it is they do with their leisure time and why they make the choices they do.

“Twice a year, in May and November, we conduct global sports surveys,” explained Lamberti. “We interview 1,000 people each in over 30 countries.

"It is a survey that gives us the opportunity to speak not only to the fans, but to the non-fans as well, to understand why they are non-fans and what could trigger their interest in specific sports or specific events.

“The Formula 1 brand is very strong, and Formula 1 is very iconic - a lot of people have aspirations to attend a race. But it’s a long event, it’s expensive, and it’s non-essential.

Geach thinks that the answer lies in the sport’s own output. “I think the content has got to be aimed at those people, at the casual viewers, and not just to the petrolhead. We need to look at how sport is being consumed.”

The success of the pre-British Grand Prix London Live event is a perfect example of marketing F1 at the casual fan. Over 100,000 people watched F1 cars running through central London in July, and the event was ripe with social media opportunities, with fan selfies aplenty and content from all of the teams.

The free event received widespread mainstream media coverage, increased exposure for the British Grand Prix at Silverstone, and was enjoyed by nearly as many fans as attended the race itself on Sunday.

The first steps in bringing Formula 1 to the casual viewer have been a success. 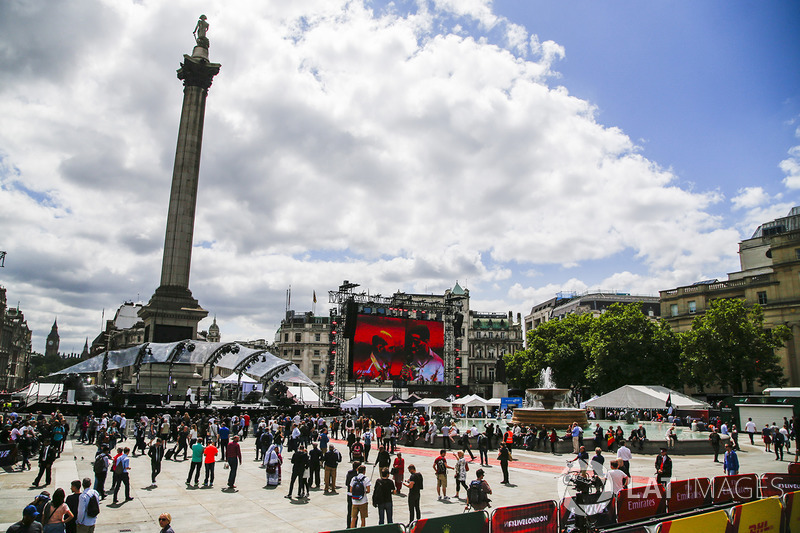 The atmosphere around Nelsons column in Trafalgar Square

Nasr: F1 return "difficult" due to shortage of teams

Weekend Debate: Has the FIA done the right thing with the halo in F1?