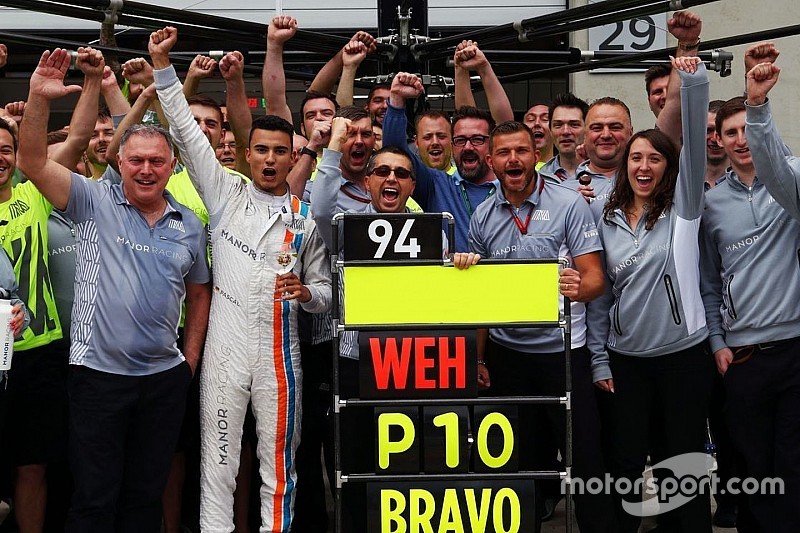 Manor racing director Dave Ryan says his team is ready to push even harder now for better results after scoring its first points of the season at the Austrian Grand Prix.

Pascal Wehrlein was one of the stars of the Red Bull Ring weekend as he battled hard to secure his maiden top-10 finish.

The result could prove significant for Manor in the battle with Sauber for 10th place in the constructors' championship, which is worth millions of dollars in prize money.

But Ryan has told Motorsport.com there is no sense of the outfit thinking it has achieved its target.

“Sauber have gone through a bit of a tough time and I am sure they are going to bounce back,” said Ryan.

“We've got to go to every race with a view to finishing as high up as we can, and at the end of the year the points score will tell its own tale.

Ryan knows that Manor's recent strong form was helped by F1's run of power-sensitive circuits that played to the strength of the team's Mercedes engine, but he sees no reason to think more good results cannot come.

“The last three tracks have been pretty good tracks for us, and the next possible few aren't going to be too good for us,” he said.

“You've got to be competitive everywhere and you have to be in a position to take advantage of any situations that come your way. So we might find it a bit harder in the next few races, but that is life. We have to deal with it and figure out what we have got to to do to sort this out.”

He thinks that, having got that crucial first point in the bag, that the team will be extra motivated to deliver more in the future.

“Everyone is working very hard and that is fine, but occasionally you need a pat on the back or a result to come your way – and when it does, you go 'oh, that is pretty nice, let's push a bit harder and see what happens next'.

“It brings everyone together and shows you that everything is possible. That is what we are here for.

“We are not here to work unreasonable hours week after week. We are here to go racing, and try to get a good group of guys and a good atmosphere, a competitive car and we want to have a bit of fun as well – that is pretty important. If you get some results and things go your way you can do that.”

Speaking about improvements to the car, Ryan said: “We've got some good updates at Silverstone. A little bit of aero and some mechanical and a few more aero updates coming through after that. We've got quite a programme of stuff coming through.”