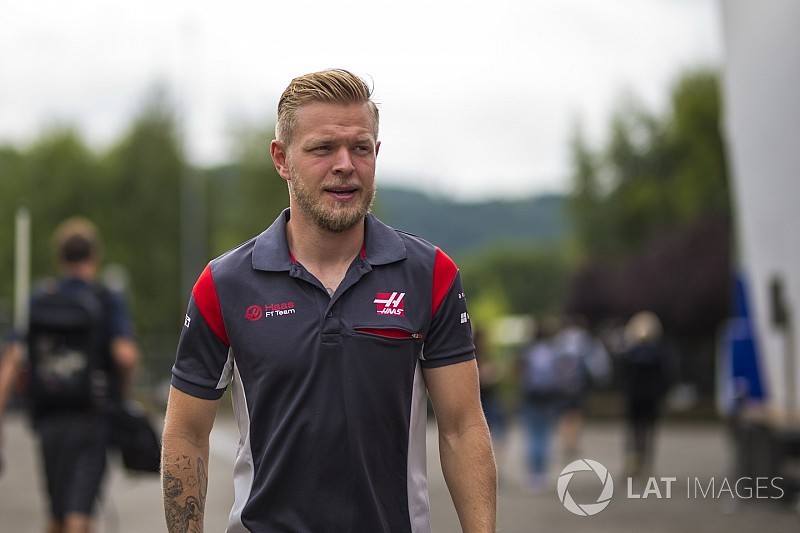 Haas boss Gunther Steiner sees no need for a "hugging session" between Kevin Magnussen and Nico Hulkenberg despite their "suck my balls" bust-up in Hungary.

Hulkenberg and Magnussen came to blows after an on track clash at the last race in Hungary, with their public slagging match becoming a big hit on social media.

But with both drivers eager to move on from what happened, Steiner sees no need to step in either – having cleared the air with Hulkenberg after bumping in to him at Budapest airport on the morning after the Hungarian GP.

"There is at some stage, there is a cut-off. It is getting old. No one wants to hear old news. It was fun. Nothing more needs to be said, we don't need to have a hugging session between Nico and Kevin.

"We have our standpoint, he has got his one. They don't clash. We do business but I don't think we need to get into a 'he said, she said'. Let's just move on."

Hulkenberg also vowed to get over what happened, having made clear his feelings to Steiner that Budapest morning.

"We exchanged opinions, we had differences of opinions, but that's life, it happens," said the German. "Not much more to say about it.

"After a race, often there are emotions, you're still a bit hot from the race. I felt I had to share what I felt and what I had to say. That was it, move forward and keep racing."

Steiner said there was no need for him to intervene with Magnussen, but admitted he had joked about the incident with the Dane immediately after the weekend.

"We had a few jokes on WhatsApp and that was it – there was no point to make a meal out of it. I quite found it entertaining.

"My opinion is that sometimes you have to say what you think because I do, so I cannot blame him that he should be corporate talking. I sometimes cannot stop myself saying something that I shouldn't."

Magnussen admitted that it had been a quite unusual situation for him to be confronted by a rival post-race, but said he had no intention of speaking to Hulkenberg about things.

"I don't mind," he said. "It is very rare that I get negative comments at least from other drivers. I think he wanted it to be on the television."

Magnussen also cleared up some debate after the event about what exactly he had said – with uncertainty about whether he had told Hulkenberg to: "Suck my balls, honey." or "Such my balls, mate."