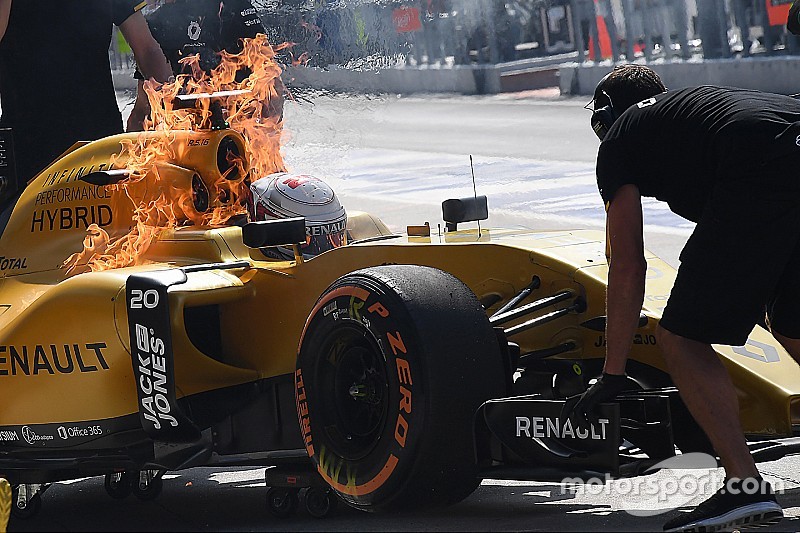 Kevin Magnussen says that the swift exit from his Renault because of fire in Malaysian Grand Prix could 'possibly' have been a different story if a Halo had been attached to his car.

The Dane had to leap out of his RS16 after an issue with a fuel breather pumped petrol out of the top of the engine cover, which ignited on hot bodywork.

But amid some talk about what would have happened if the Dane had had a Halo fitted, Magnussen admitted that it was an issue that needed considering.

When asked if the outcome could have been a different story with a Halo, Magnussen said: "Possibly. I've never run the Halo so I'm not the best person to ask, but maybe you can ask some of the guys who have run it – and see if we can still get out as quick.

"In my opinion, five seconds is too long if the car is on fire. And you don't want to take five seconds. It is an interesting question."

Although Magnussen's fire looked spectacular from the television images, the Dane said that from the cockpit everything was pretty calm.

"It was no drama," he said. "Everything worked well on the car on the in-lap. I just saw the smoke and hopped out."

Asked about if he reacted to the radio message from the team telling him about the fire, he said: "No. I was already out when they were talking…

Magnussen also admitted that the timing of the incident was not ideal, because it meant he lacked laps at a track where changes to the surface and profile of the corners have taken place.

"I think the track is more different than I expected," he said. "It changed quite a lot actually, so it was quite valuable laps that we were losing in P1. But we were still able to catch up and get on the pace.

"It is always better to get on top of your driving and on top of the track earlier to work on the setup of the car. That is a bit more relevant if you are driving the way you want to drive in qualifying, but it should be fine still."