First Lewis Hamilton leaves McLaren F1 team for Mercedes, and now the Woking based team will lose their technical director to the Mercedes team.

Jan.22 (GMM) McLaren could be set to lose its technical director.

Germany's Sport Bild is reporting that Paddy Lowe, who has been with the Woking based team for twenty years, is following Lewis Hamilton to Mercedes.

The report said executive director Toto Wolff wooed Briton Lowe, 50, for a switch to Williams, but Austrian Wolff has subsequently moved to Mercedes.

"This is big news," Red Bull's Dr Helmut Marko is quoted as saying.

This is the first time I've heard of it.

McLaren declined to comment, according to Britain's Daily Telegraph.

Sport Bild said the other major changes at Mercedes, including the rise of Niki Lauda and the departure of Norbert Haug, could indicate that Ross Brawn and Nick Fry are preparing to leave.

The most endangered, however, appears Fry, with Mercedes' media statement on Monday saying: "Together with Ross Brawn, Lauda and Wolff will complete the management" of the team.

According to Italy's Autosprint, Mercedes' F1 shares are now split between Daimler (60 per cent), Wolff (30pc) and Lauda (10pc).

As he visited Mercedes' Stuttgart facilities on Monday, Hamilton said he knew nothing about Lowe's reportedly imminent McLaren-to-Mercedes switch. 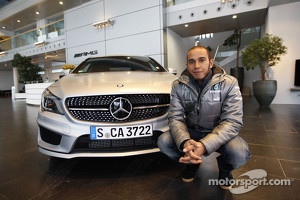 "This is the first time I've heard of it," he said.

Meanwhile, Autosprint reported that Wolff's move from Williams to Mercedes could result in Williams being powered by a turbo Mercedes engine in 2014.

Wife Susie Wolff, however, is staying as a Williams test driver.

"Very happy for my husband," she wrote on Twitter. "We will be fighting him hard on track!"

Glock to BMW, no Marussia move for Vitaly Petrov

Guest Blog: Knowledge is power for the Sauber F1 Team