Turkish GP weekend "not what F1 is about", says Russell 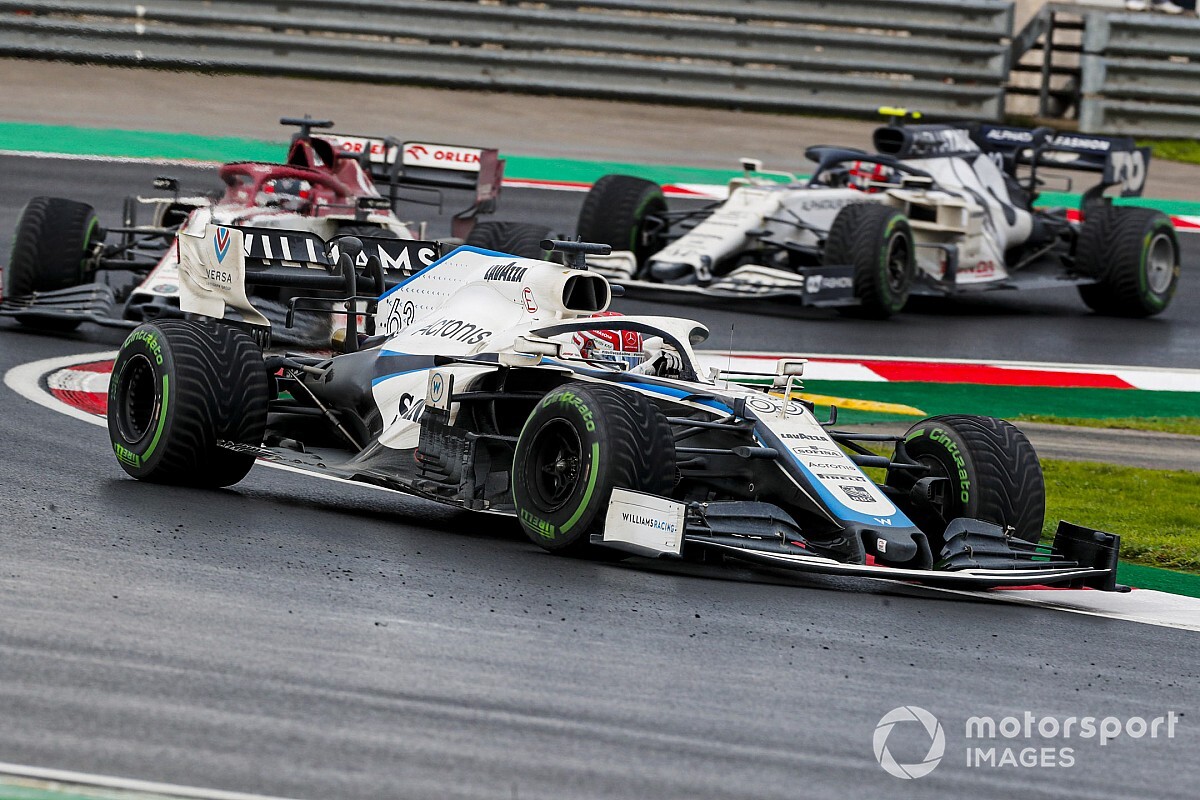 George Russell was left frustrated by the low-grip conditions throughout the Turkish Grand Prix weekend, saying it was "not what Formula 1 is about".

A late resurfacing of the Istanbul Park circuit combined with a lack of other series running prior to F1's arrival left the track lacking grip, making it difficult for drivers to get up to speed.

Rainy conditions made it even more difficult for drivers throughout qualifying and Sunday's race, which featured a number of spins and mistakes through struggles for grip as tyres struggled to get up to temperature.

Williams driver Russell ultimately finished 16th and was left frustrated by the huge swings in laptimes depending on tyre temperature, saying it did not make for an enjoyable race.

"The laptime varies by two to three seconds a lap, if you get the tyres working or not - it's unbelievable," Russell said.

"This weekend has not been really what Formula 1 is about. I'm sure the show looked great, and I'm sure I would have loved watching it from my sofa at home.

"It's just been a lottery for everybody out there. I love driving in wet conditions, but this was just something else."

Russell said it was frustrating it was to not maximise the potential of the fastest cars in F1 history around the returning Istanbul Park track.

"I think everybody was so excited to come here, and from the very first lap in FP1, we just had absolutely no grip," Russell said.

"The biggest factor, without a shadow for a doubt, was the new resurfacing. From what I hear and I understand, it all had to be done very last minute, and the Turkish corporation or whoever ran the race did a really good job to get everything done in time, and they were delayed by some really poor weather.

"It was like driving on sheet ice, and actually the times I went off the track onto the old concrete, I had much more grip than I did, and the concrete apron in the pit lane, which is normally incredibly slippy compared to the track, had a hell of a lot more grip than the actual race track.

"I don't think a single driver enjoyed these conditions."

Asked if he could appreciate that fans at home would have enjoyed such an unpredictable race, Russell replied: "If you want chaos and carnage, and drivers being made to look like idiots, there are other categories and sports out there you can go and watch.

"Formula 1 is about the best cars, the best drivers, the best teams going to the best tracks, and showing what they can do. This weekend was not that.

"I'm sure I would have loved it from the sofa, but there's got to be maybe a midpoint that I'm sure F1 can learn from, and we're not just going here and rolling the dice week in, week out."