The Lotus 79 is part of an elite group that Giorgio Piola considers to be milestone machines, with each of these cars incorporating designs, solutions or systems that would be widely adopted by their rivals such was their potency.

Today is the anniversary of the car's first appearance at the 1978 Belgian GP, a race it duly won and whose appearance prompted a development war in F1 as rivals realised they too needed to follow its ground effect concept.

However, the Lotus 79 was not the team's first foray into 'ground effect', but rather a refinement of a solution it had introduced a year earlier with the 78. 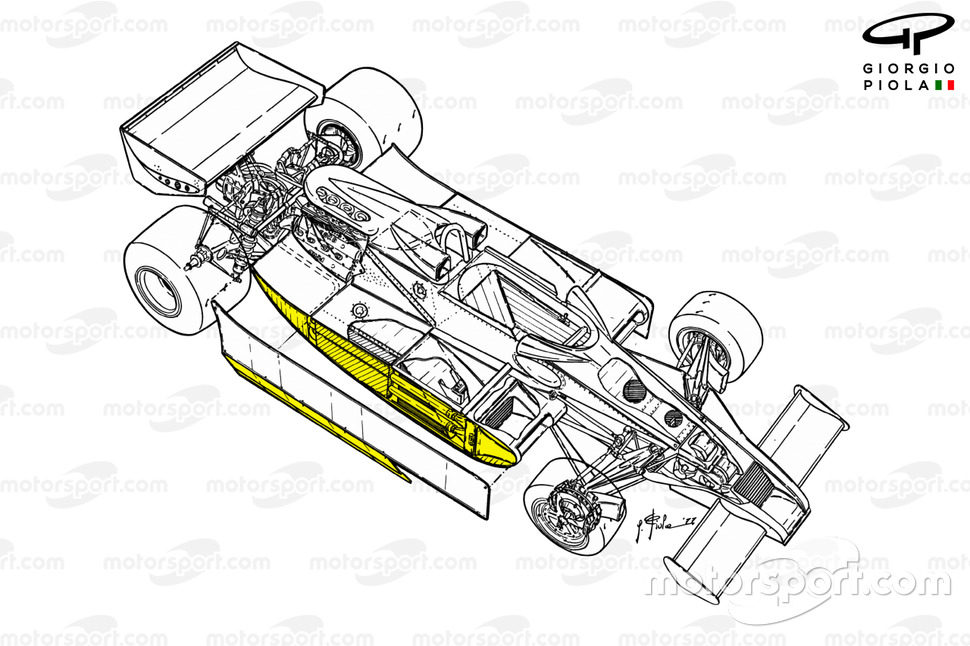 The key advantage of the Lotus 79 was a discovery that almost happened by mistake, as continuous running with a wind tunnel model had led to some fatigue, leading to the floor of the sidepods drooping at their edges. Although not planned, this instantly showed a sharp increase in downforce.

Lotus was initially confused by this, but set about replicating the results and it found that closing off the sides of the floor increased downforce dramatically.

Now though it had to find a way to make that work out on track, as extending the sidepod down to the floor wouldn't work. It needed something flexible, otherwise it would wear or break, with something as simple as an uneven track surface likely to cause issues.

The team could have started its experiments and run the skirt design towards the end of 1976, but opted to wait, fearing that other teams would catch on too quickly and work the solution into their designs for the following year.

Even though the 78 had seven wins in its own right, it acted as a moving laboratory for Lotus, as it took what it had learned during wind tunnel experiments and figured out how to bring things to life in the real world. 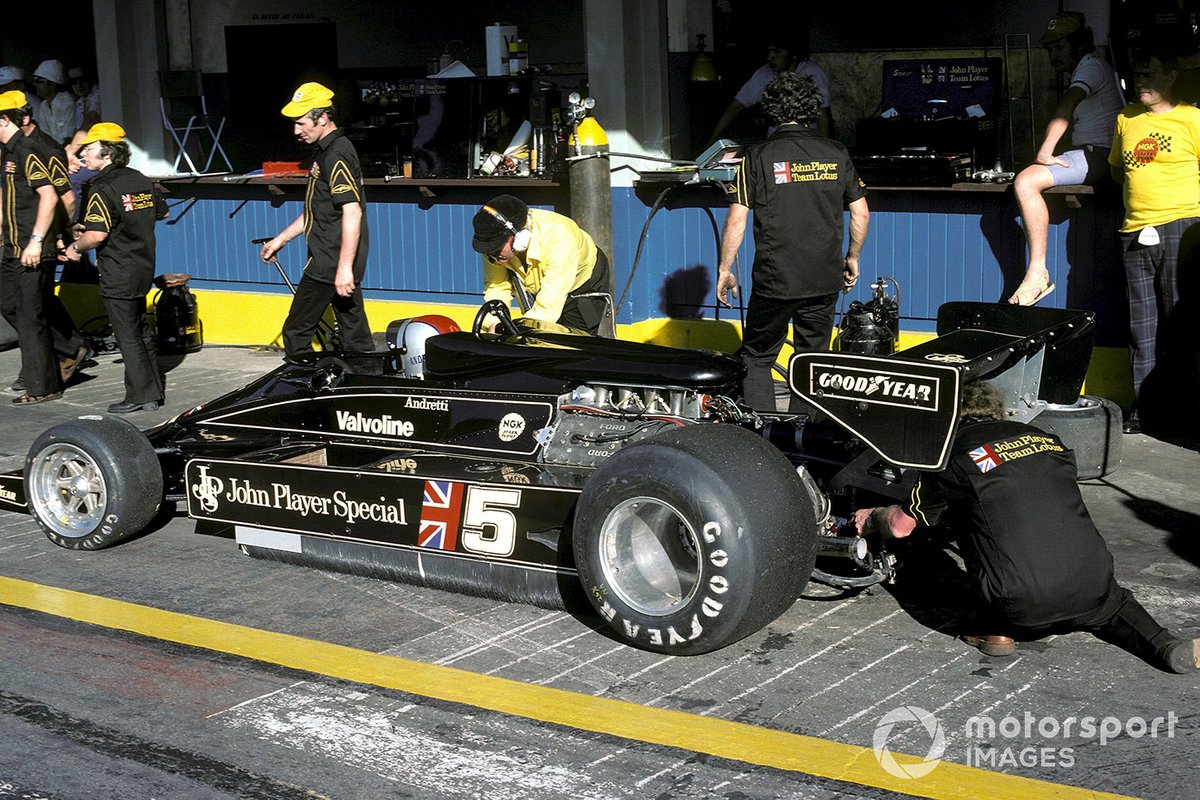 In search of a way of using skirts, it turned to nylon brushes in the first instance. But these rubbed away on the track surface too easily, meaning that the ground effect it were searching for disappeared as the car put down the laps.

The issue was that as downforce grew, the car was sucked to ground even further, meaning it had to find a solution that not only meant the skirts touched the ground when static, but could ascend when forces acted on the car.

It tried numerous materials and methods in which to maintain the seal, before finally settling on the sliding skirt method. This was effectively a carbon honeycomb panel with a ceramic rubbing strip sandwiched between the sidepod walls.

Furthermore, a sprung mechanism inside the sidepod helped to control how much travel the skirt would have. 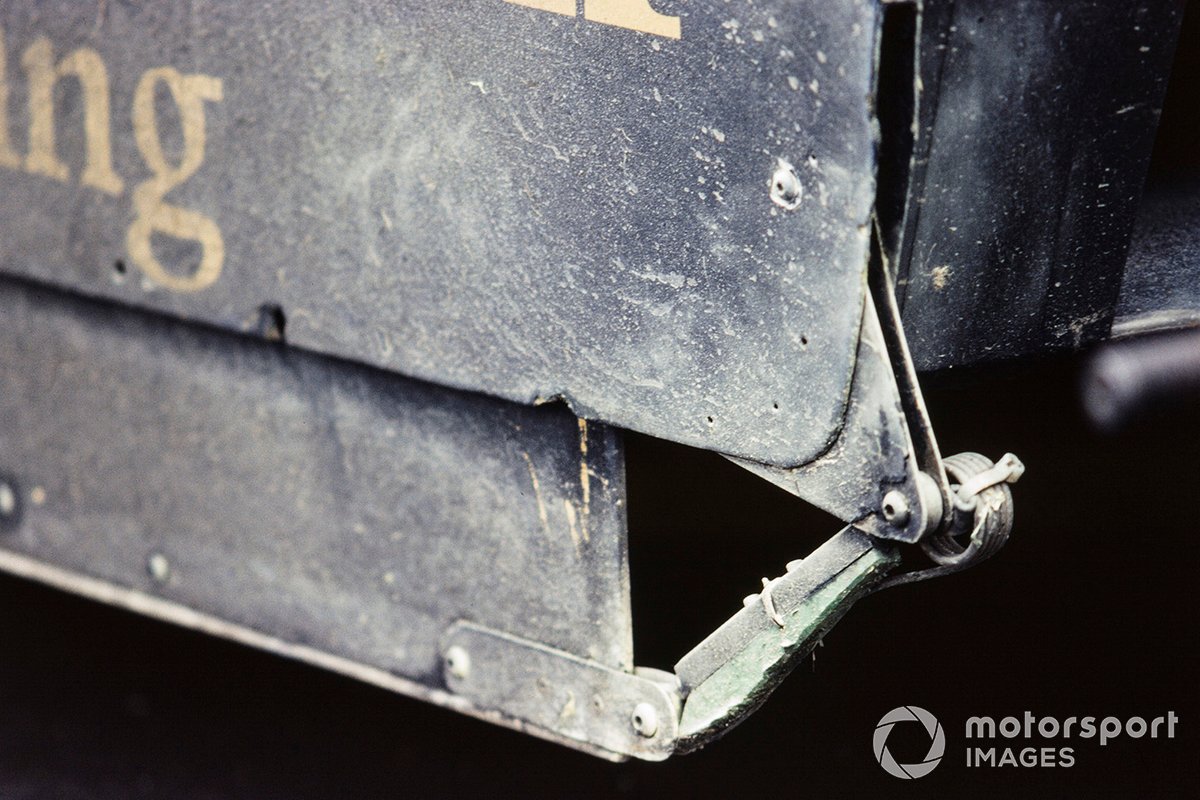 The Lotus 79 Ford sidepod with the famous ground effect aerofoil

The 78 was clearly a leap forward for Lotus but not enough to vault it right back to the front of the pile, with a large wing at the rear of the car needed to improve its balance. This resulted in an unwanted drag penalty, meaning it was often slower than its rivals on the straights.

Fortunately for Lotus, this masked the potential of its solution from the other teams and, when the heavily refined concept, in the form of the 79 appeared, it was too late for the other teams. Rivals now had to play catch up and work out all the pitfalls of ground effect that Lotus had encountered already. 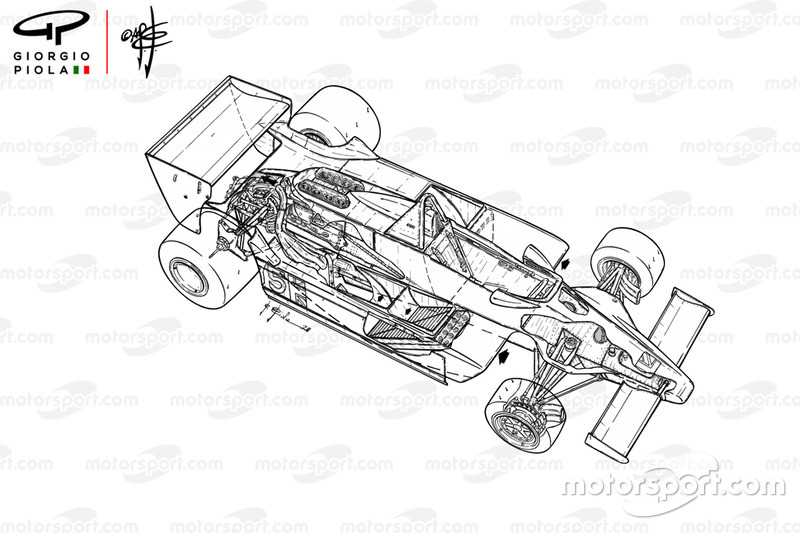 Debugged, the 79 was the class of the field, bringing six victories and four podiums during the 1978 season, leading to championships for both Lotus and Andretti.

The car had moved the needle, maximizing the size of the ground effect tunnels by not only utilizing a narrow cockpit but also by moving the fuel tank behind the driver, rather than having side tanks like its predecessor. 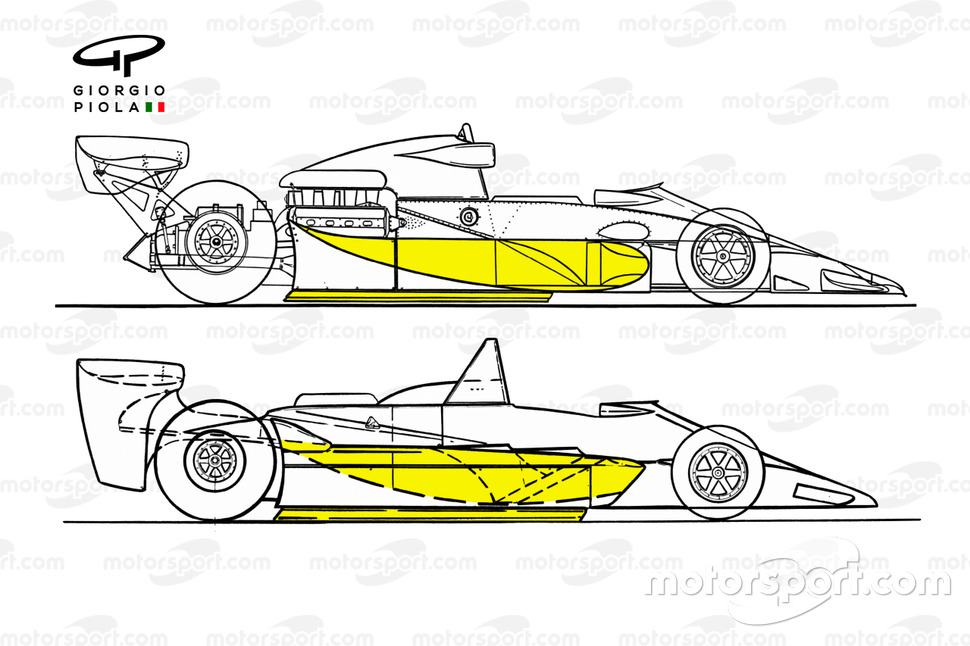 This obviously lengthened the car, but it played into the team's hands by allowing longer tunnels that had also been widened to the maximum width possible within the regulations.

As a string of good results headed its way and the other teams began to try to follow in their footsteps, Lotus set its sights on the next machine…

The 80 was a typical example of Chapman's desire to continually innovate and take giant leaps forward, simply unsatisfied by the notion of refining what had worked before.

The 80 was an extreme ground effect car, designed to maximise the ground effect advantage, using a long skirt, right from the nose to the curved sidepods that pared in alongside the rear wheels.

One of its major problems was maintaining the seal between it and the race track, an issue that was only magnified by the curvature of the bodywork.

The team failed to make the car work and would have to return to the 79. But by then it was too late, the others had caught up and Lotus' big advantage had gone. 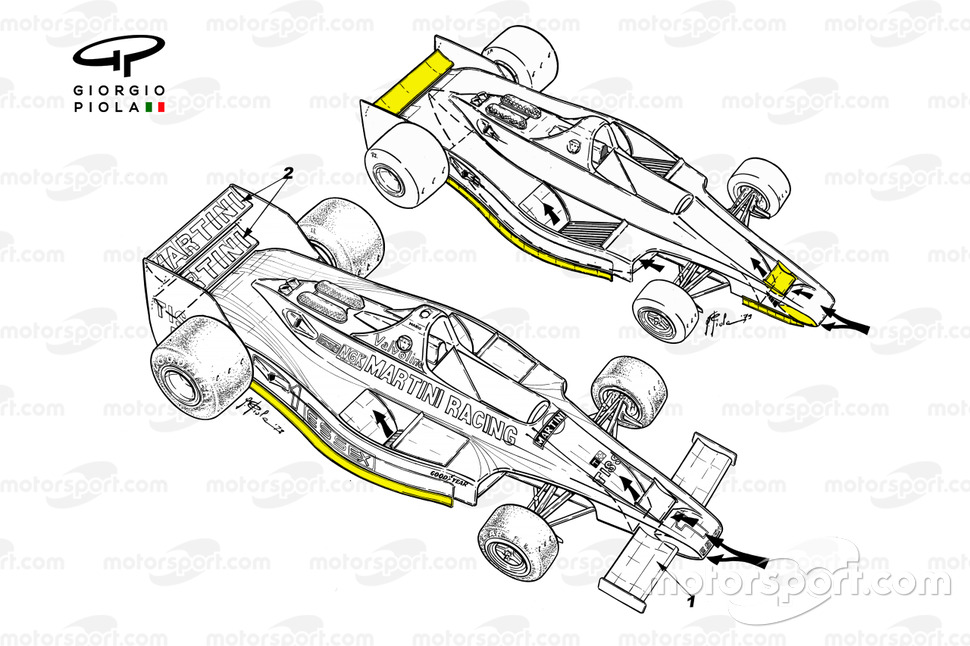 1/7
Chapman and his Lotus engineers had originally envisaged the 80 without wings at all, cutting drag dramatically. However, it soon became obvious that its quest was flawed and wings were added to try to resolve the cars penchant for porpoising. 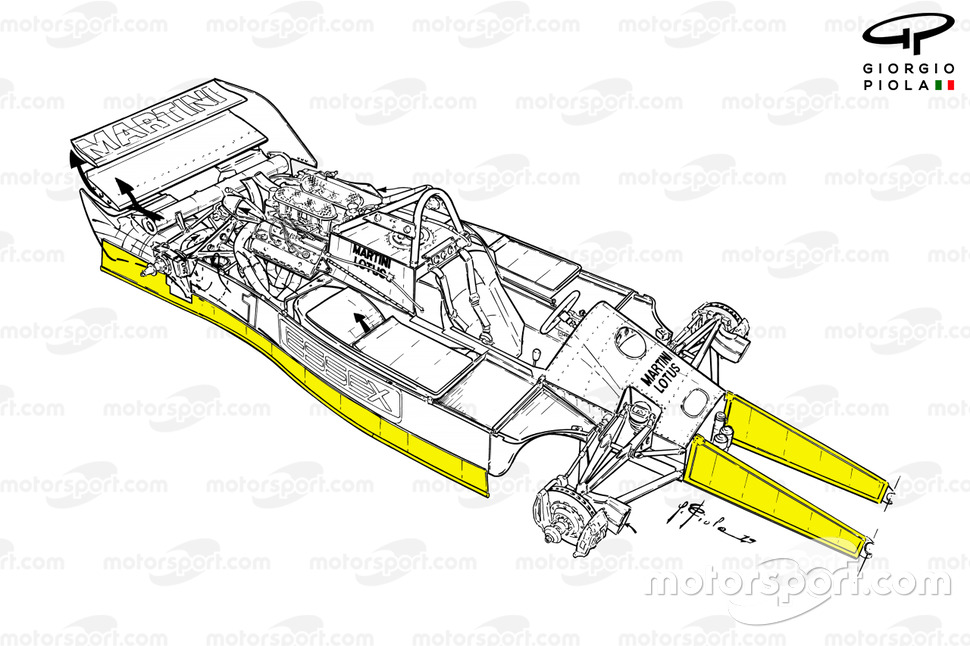 2/7
This illustration of the 80 without bodywork shows how the nosecone was essentially just two spars that enabled the flow-through channel.

3/7
From the underside, we can see how the nose channel was supposed to work and how the tunnels had been designed to reach all the way to the rear of the car. 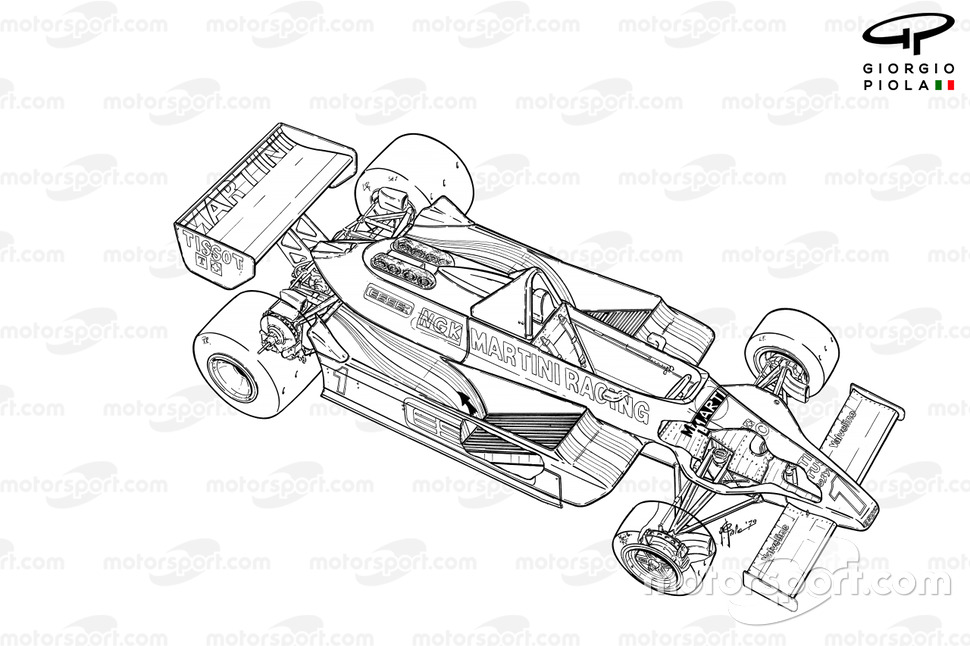 4/7
Lotus would be forced to switch back to the 79 but it would look a little different in 1979, as it would no longer feature the JPS livery. 1980 opened with an unusual sight at the front of the grid, as Ligier took victory in the first two races with its JS11. Having moved onto the design of a ground effect car early, the team had a head start on the rest of the field. 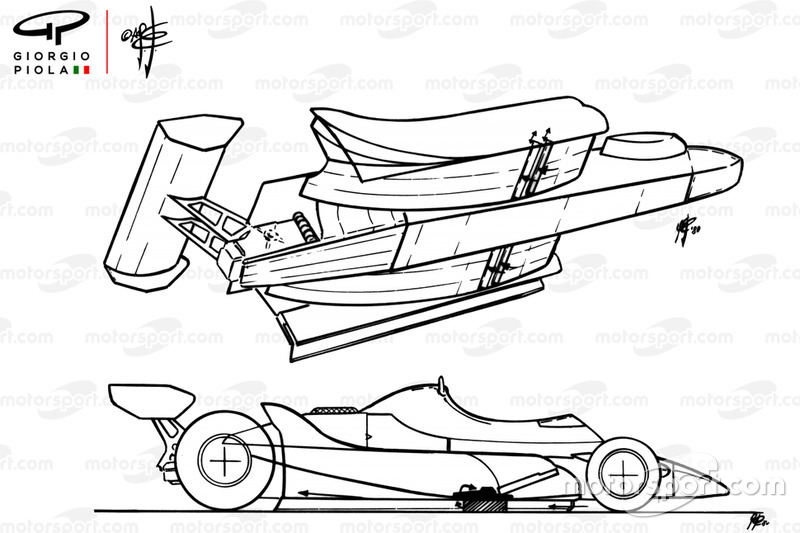 5/7
The ingenious thing about the JS11 was Decarouge's 'clapet' design, which you could think of as an early DRS. The flaps on the underside of the sidepod's tunnel would open at a certain pressure to reduce the downforce building under the car on the straights. Giorgio Piola knew at the time that something was going on with the JS11 but had to bide his time in order to discover exactly what the team was up to. But the 'clapet' system was nestled underneath the radiators within the sidepods, so the team made every effort to keep the area covered up when the bodywork was off. This would bite them hard at Hockenheim when a towel used to cover the radiator and clapet system was left in the sidepod as the bodywork was put on, subsequently cooking the engine during the race. Luckily for Piola, after Laffite's accident at Watkins Glen, the car wasn't taken back to the pit lane. Instead it was sent to the garages behind, and he pounced on the opportunity to take a close up look. He was able to get there before anyone from Ligier and was able to uncover the truth and grab photographic proof of the system. 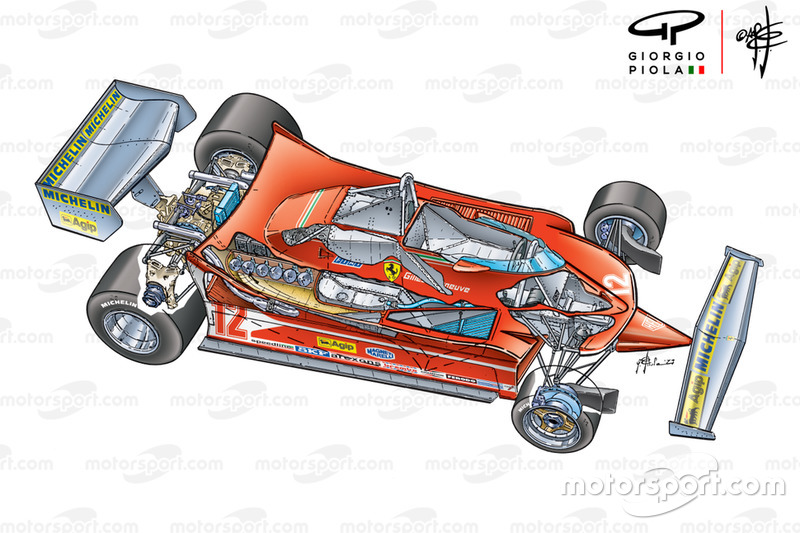 6/7
Ferrari would carry the torch for the next few races, as Villeneuve and Scheckter would have back-to-back wins either side of another for Ligier, this time for Depailler. The 312T4 was another car designed with ground effect in mind and would result in championship titles for Scheckter and Ferrari. Meanwhile, another team was starting to have breakthroughs of their own... 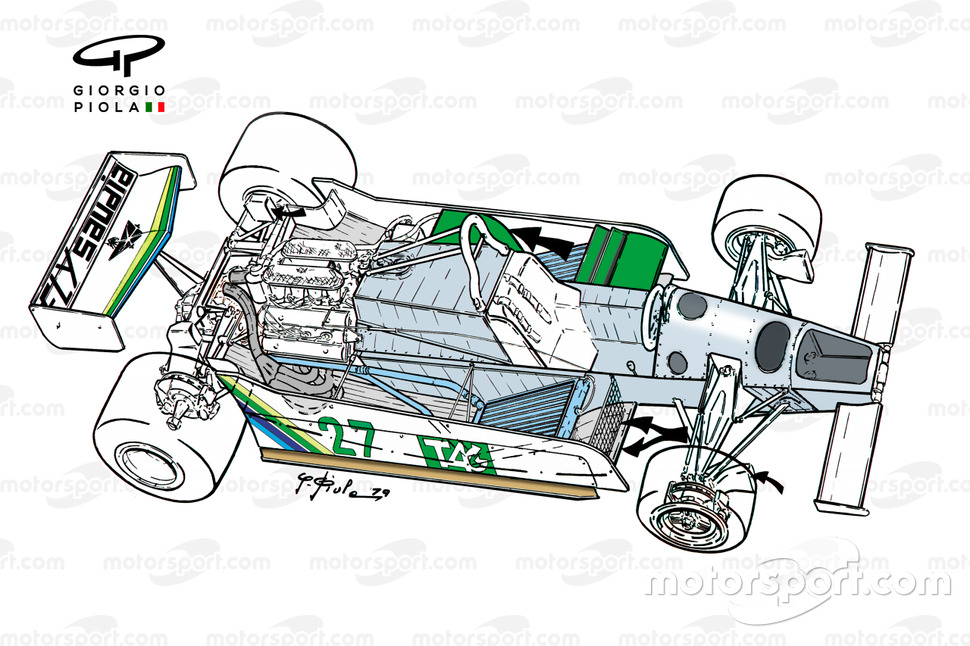 7/7
Where Lotus had tried to be revolutionary and failed, Williams simply took inspiration from the 79 and set about resolving many of its engineering flaws. Patrick Head knew that improving torsional stiffness would instantly translate into performance, as Lotus in its quest to narrow the 79's chassis to accommodate wide tunnels had still only used a single skin arrangement that was pop-riveted together. As such the FW07 featured an aluminium honeycomb chassis - not a new idea but still not widely adopted at that point. The 79 also suffered from brake fade, caused by the fact that the caliper was mounted to the gearbox and, over the course of a race, heated up with it. This boiled the brake fluid and caused the drivers no end of problems. The FW07 was introduced at the fifth round of the championship, the Spanish GP. But, its single biggest improvement would be unlocked just in time for its home Grand Prix at Silverstone. Ahead of the Grand Prix, Frank Dernie had discovered during wind tunnel tests that air escaping from the sidepod tunnels was becoming turbulent around the engine. He swiftly set about finding a way to prevent this and came up with a shaped undertray that would radically boost downforce. The cars, fitted with the new undertray, gave Williams a much needed boost, and Alan Jones led the race before a failure forced him to retire. Clay Regazzoni lay in wait though and would take up the mantle and give Williams its first victory in F1. But its first real success would come in 1980 when it switched to the 'B' variant of the FW07, complete with an even more potent version of its ground effect design, allied to a strengthened chassis. The FW07 continued to go from strength-to-strength to the point where the team even ditched its front wing at points. This catapulted Williams towards the sharp end of the field, with the team able to capture another four wins in the second half of the season that elevated it to second in the Championship.

What are flexi-wings and why do F1 teams want them?