The lessons Mercedes will learn from its Monaco F1 mistakes

The Monaco GP weekend was a painful one for the Mercedes Formula 1 team, and the loss of the lead in both world championships made it even worse.

A lowly seventh place for Lewis Hamilton was accompanied by urgent questioning of his strategy from the world champion, who lost two places to Sebastian Vettel and Sergio Perez over the pitstop sequence.

Then there was the very public embarrassment of the crew struggling to remove the right-front wheel from the car of Valtteri Bottas, forcing the retirement of an otherwise healthy machine.

Less obvious was the failure to fully get on top of set-up and tyre warm-up that saw Hamilton in particular lose his way on Saturday morning, and which led to changes and something of a punt for qualifying.

He still only started seventh and, come the race, it was tyre concerns that left Mercedes in a strategic dead end, and pushed Hamilton to an early stop that didn't pay out.

It's perhaps easy to suggest that under pressure from Red Bull – with Ferrari joining the party in Monaco – the team is making more mistakes than usual.

There have been other collective glitches. Hamilton's off in Imola, from which he was able to recover second only because of the safety car triggered by his own teammate's collision with George Russell, was one of the most public.

An exhaust sensor issue cost Bottas time in Portugal, and the Finn has suffered on a couple of occasions in races from tyre warm-up issues. And prior to Monaco, there was the occasional slightly off-par pitstop. 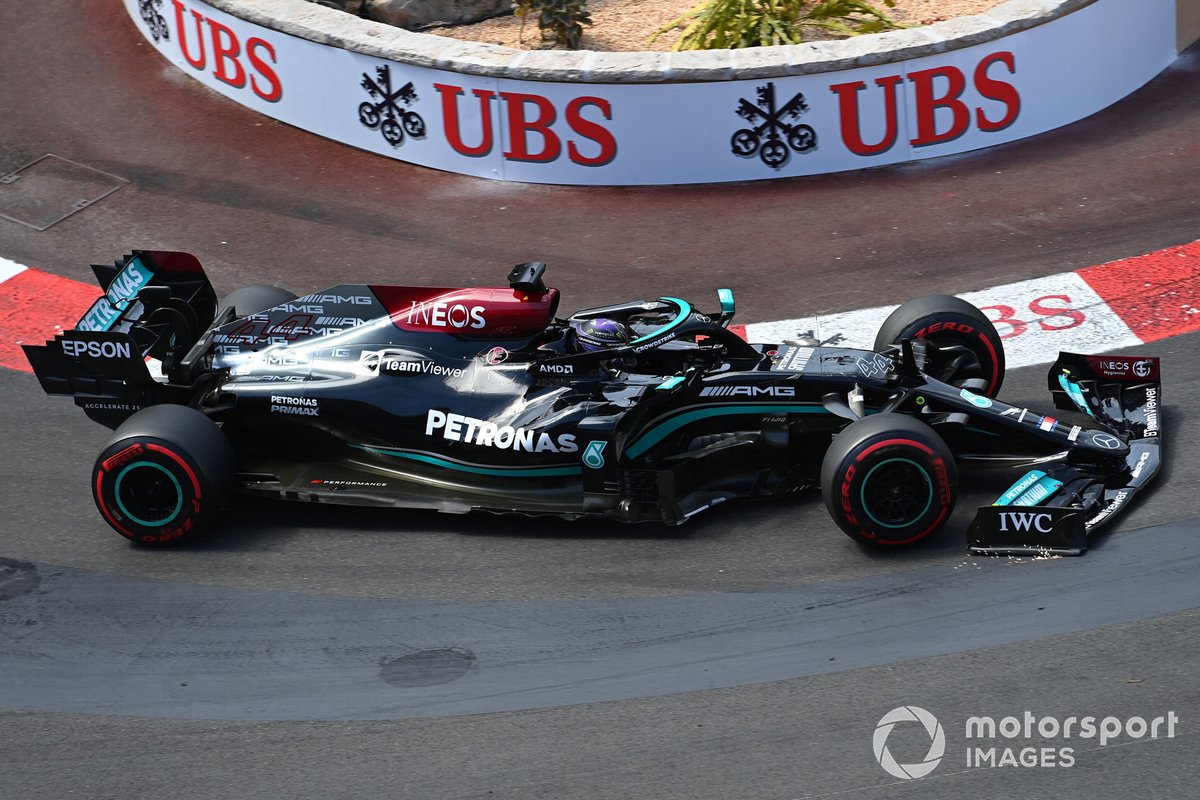 It's not been a faultless season, but it's not been a catalogue of disasters either. The team showed its class by recovering fast from a poor Bahrain test, and it has usually got Hamilton's strategy just right, helped by the driver's brilliance behind the wheel.

Despite the specific issues in Monaco, the team still believes that Bottas was in the fight for pole before the red flag ended Q3 early. And while much else went wrong in Monaco, Hamilton did manage to bag the point for fastest lap.

The bottom line is that no team/driver combination can have a perfect season when there are 23 chances to get it wrong.

Mercedes and Hamilton can't claim to have done so in the past, even in the years when they won the title easily. Indeed, the street events in Monaco and Singapore have often been outliers that have seen the Brackley team have off-weekends.

"We were always on the backfoot, it seems to be a kind of cursed race track for us," said Toto Wolff in Monaco.

"It's a little bit like Singapore where we never got down to the problems until very late. When you start on the backfoot, you have no grip and no trust in the car, it's very difficult to recover.

"It was a little bit easier for Valtteri, who had the pace, but overall a weekend to forget. Well, on the contrary actually, we're not going to forget, because tomorrow we're going to put the finger in where it hurts most and try to learn."

The team has had to endure difficult races on a regular basis, so it knows how to react and deal with them.

"We've all sadly been in a race weekend like this before," said technical director James Allison.

"And we know that the only thing to do is to pick yourself back up and figure out actually why we were slow as that slowness is the main pain - and deal with it and come back and do it all again at the next race, and hopefully again and again until we eek out the sort of lead that can cope with a screw up like today." 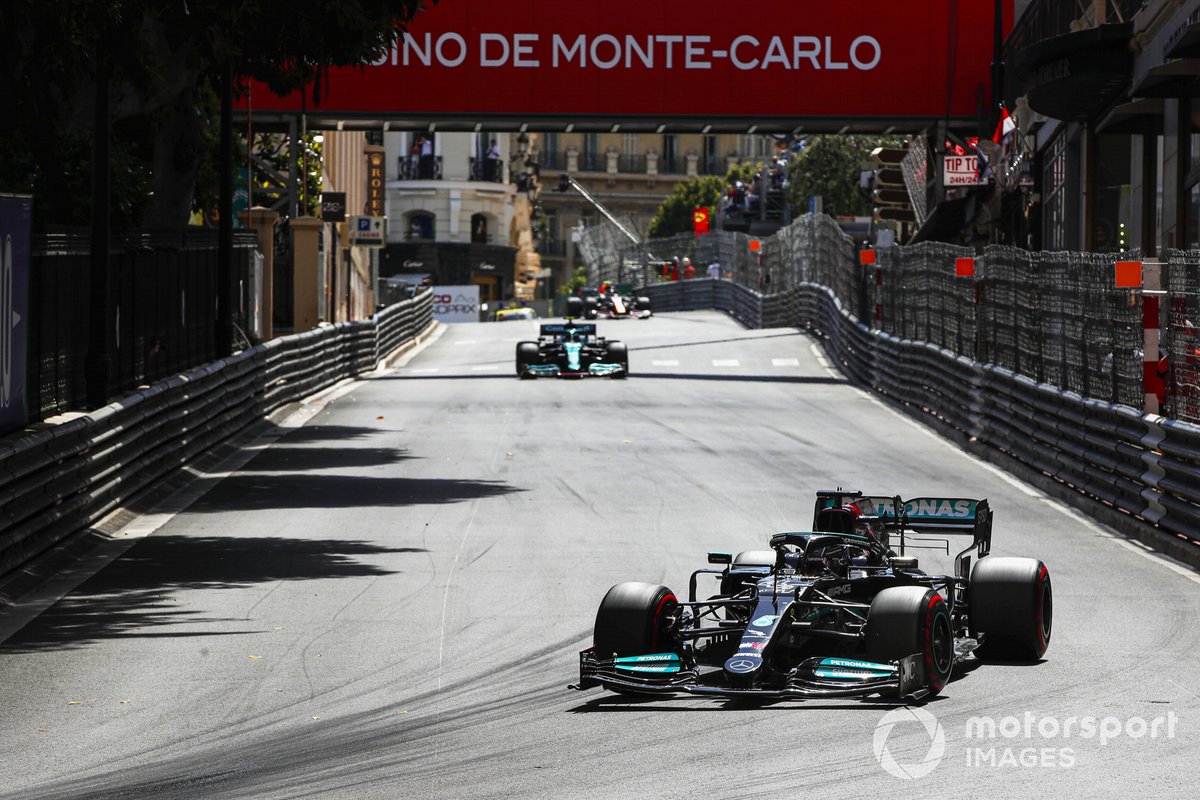 Strategy chief James Vowles conceded that when you are running at the edge in all areas – and being pressured by a strong rival like Red Bull – things can go awry.

"I think it is a fair observation that one race a season ends up being very poor," said Vowles. "I think for me that is just an indication that we are a world championship fighting team, we are on the limit of pushing every boundary.

"It doesn't matter whether it's car performance or pit stops or human endurance or the drivers taking everything they can to risk everything for every point that is available to them. When you are there, you will make mistakes."

As Wolff and Allison indicated, the key with any such mistakes is to learn from them – and not repeat them.

The old "win as a team, lose as a team" slogan may be something of a cliche, but it works for Mercedes, where there is no fear of soul-searching and pinpointing errors after weekends such as Monaco.

It's a culture that Wolff has successfully instilled over the years, and which encourages openness and honesty in debriefs.

"I'll start with our core and our ethos within this team," said Vowles. "And it's one really of standing up in the case of adversity, the one that accepts that faults and failures are going to happen.

"What's actually really important is how the team cements itself after that. How do you pick apart the details and learn from it, and more importantly become stronger at the next event and from then onwards.

"That culture underpins this team and what happened this weekend in Monaco will only serve to strengthen that. Already this morning [Monday], everyone is doing their utmost to understand every single bit of performance data and reliability and pit stop data, such that we move forwards as an entity and as a group." 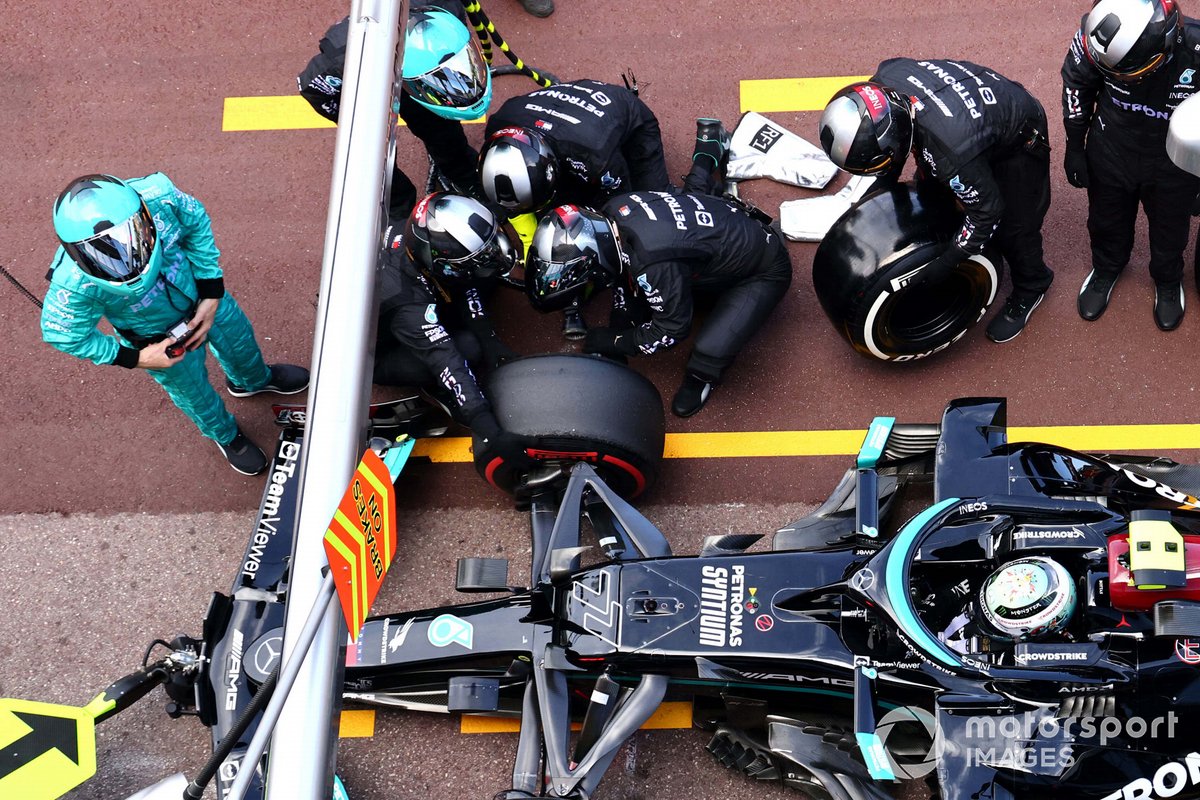 Valtteri Bottas, Mercedes W12, has a pit stop issue that to retirement

Vowles stressed that there are always lessons to be learned, and improvements to be pursued, even after seemingly successful weekends.

"What's important isn't the mistakes that you make, it's the corrective action that happens afterwards and it is how the team bonds following that," he explained.

"We will treat this race as we will every race. We break everything down into detail, we separate into various groups in the factory to understand what we could have all done better.

"Even at Barcelona there were items for example that we could improve upon and it's no different in Monaco, there is just more of them. And it's how you correct and move forward with all the little details that ultimately corresponds to how the car will be, and how the team will be across the remainder of the season."

The pitstop issues aside, the team has to get to the bottom of what it could have done better on set-up and tyre usage in Monaco. Even if the specific answers don't directly apply at other tracks, it all contributes to a deeper understanding of the W12.

"If you look at our team's performance at this track over the last several seasons," Allison noted, "you would see that in years where we have won championships at some ease we have nevertheless struggled here.

"And although we have generally been on a path that has delivered a car that is broad-sworded weapon that you can attack most tracks with, this has been an Achilles Heel.

"We are never really getting them happy on a Saturday so our grid slots are lowly.

"And then on Sunday, although we are okay at the start of the stint, by the end of the first stint where most of the crucial action takes place at this rather particular track where there isn't much opportunity for overtaking except around that first stop, we are normally all out of ideas with a tyre that has died a little sooner than our competitors.

"It is understanding that which we have failed to do for a number of seasons, and we need to figure out from first principles what are we getting wrong at this track, and what are we doing year-on-year that is just not right for here." 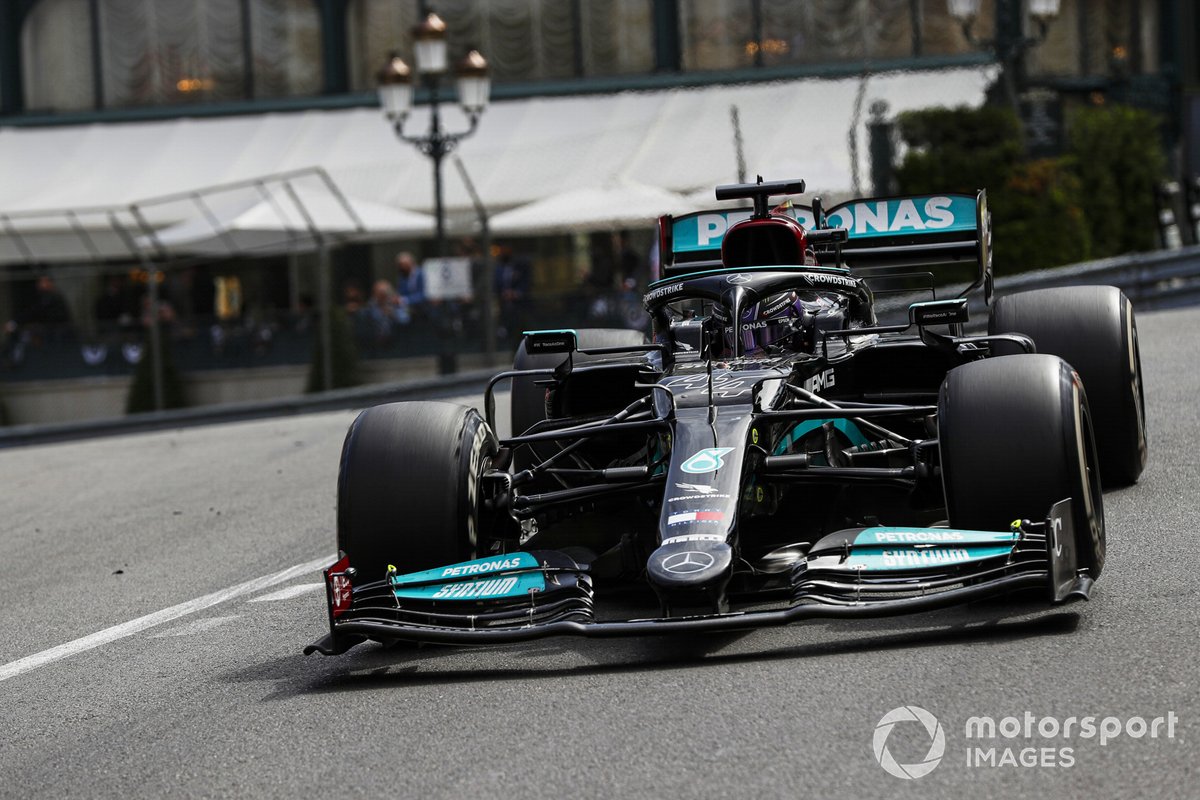 The poor Monaco weekend was exacerbated by a superb one for Max Verstappen and Red Bull, and the resulting change in the leadership of both world championships.

That swing is only going to encourage Mercedes to hit back harder in Baku and beyond.

"We had 29 points to Red Bull and we're one behind now," said Wolff. "So it isn't the prettiest of pictures, and Lewis is behind too by four points.

"But it's clear that things are going to go to the very end and I hope that these seven points are going to make a difference. Let's just learn, move on and conquer again."

Schumacher: Vettel giving me lots of advice in good friendship