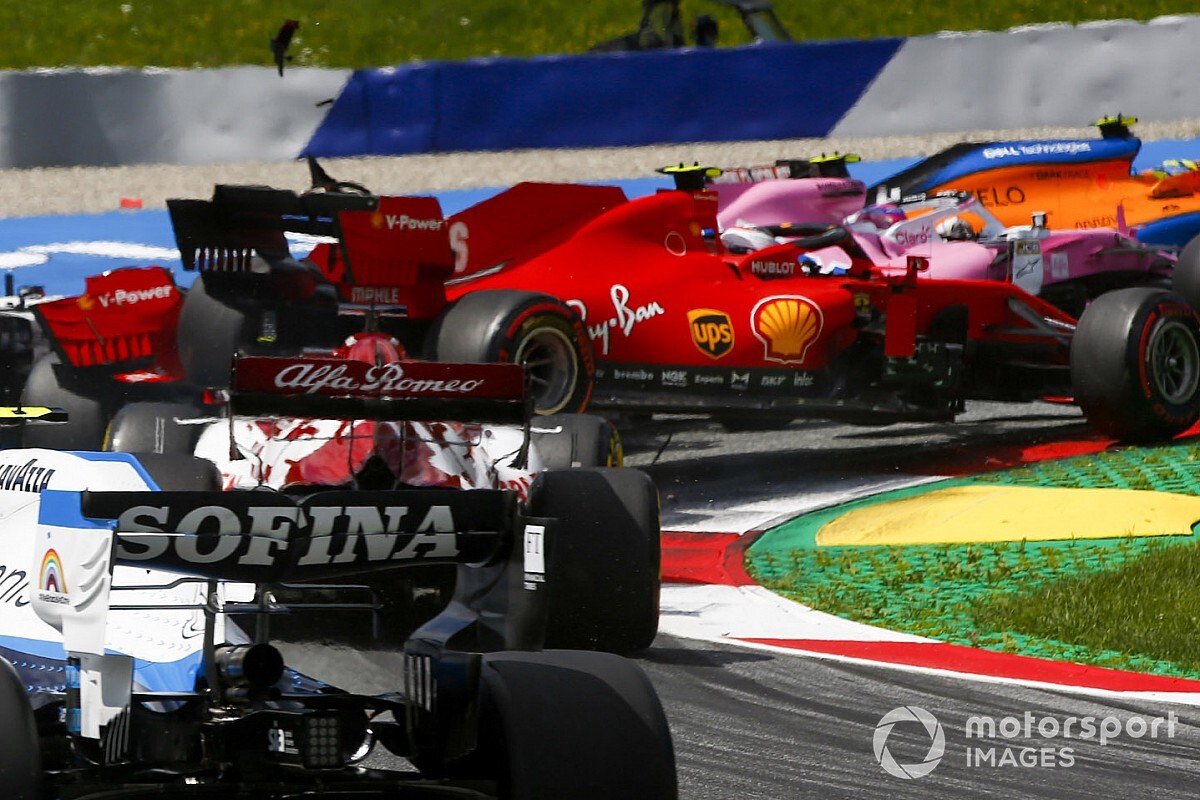 Charles Leclerc has taken the blame for the collision with Ferrari teammate Sebastian Vettel on the opening lap of the Styrian Grand Prix that forced both drivers to retire.

Leclerc ran into the rear of Vettel after trying to pass up the inside of his teammate at Turn 3 on the opening lap of Sunday's race at the Red Bull Ring.

The collision left Vettel with damage that ended his race immediately, while Leclerc was instructed to retire four laps later due to a broken floor on his Ferrari SF1000 car.

It marks the second time in four races that both Ferraris have retired due to a collision between Leclerc and Vettel.

Speaking on Sky Sports after retiring from the race, Leclerc was quick to take the blame for the collision, and confirmed he had already apologised to Vettel.

"Obviously excuses are not enough in times like this. I'm just disappointed in myself," Leclerc said.

"I've done a very bad job today, I've let the team down. I can only be sorry, even though that it's not enough. I hope I'll learn from this and we come back stronger from the next races.

"We don't need that. The team doesn't need that, and I put all the efforts of the team in the bin. I'm very sorry, but it's not enough again."

Asked if the move was too optimistic, Leclerc replied: "Yes, yes it was."

Vettel said that he was surprised to see Leclerc try and overtake given the tight nature of the corner and the fact other cars were also battling for the position.

"I was fighting two other cars, we were already three cars into Turn 3, and was very surprised because I went up the inside, and I wasn't expecting Charles to try something," Vettel said.

"I don't think there was any space. Obviously a big pity, something we should avoid, but not much that I could have done differently.

"I was just taking it easy and conservative because it's already very busy, it's a hairpin, it's very tight, and just trying to place my car for the next straight. By then I realised that I had quite some damage on the car."

The double retirement came as a blow to Ferrari, which had been expecting to get a full race worth of data from the new updates that were fast-tracked to Austria on both of its cars.

"That is a shame," Vettel said.

"Obviously it was a bonus to come here with the same track, and today was very similar in terms of conditions. But we will not get that answer I'm afraid.

"The car felt a lot better on Friday, and back to where it was last week tip to the point where it went in the wrong direction, but it's a shame because also for the update, we would really like to get the race on the line and some laps to see where the car is.

"But unfortunately we will not get that answer."

The stewards noted the incident between Leclerc and Vettel, but deemed that no investigation into the clash was necessary.

The Styrian GP as it happened