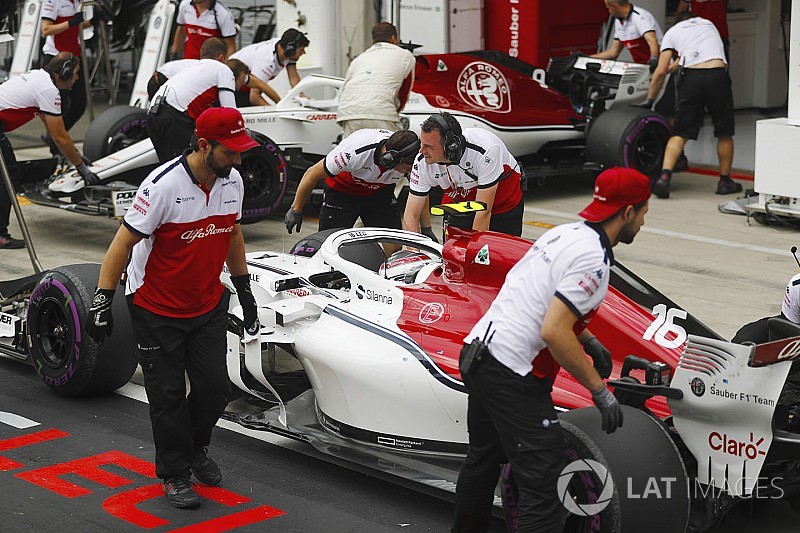 Charles Leclerc has revealed that the grid penalty he was handed for needing a new gearbox at the Austrian Grand Prix was triggered by a suspension failure.

The Sauber driver had looked set for another strong showing in qualifying at the Red Bull Ring, but was handed some bad news after final practice when it was discovered his gearbox had broken.

With his car having stopped on track at the end of the session, Sauber discovered that the gearbox failure had been caused by a problem with the rear wishbones.

Asked by Motorsport.com about whether the breakage could have been caused by kerb damage, Leclerc said: "This time we don't really know. We need to investigate. We haven't understood yet what happened.

"Something broke in the suspension, in the triangles [wishbones], a triangle broke and that ended up in a gearbox failure."

Leclerc managed to qualify in 13th place, but will start down in 18th as the result of the five places he has been dropped because of the new gearbox.

Being so far back on a weekend where his car has looked competitive has left Leclerc feeling that he may need to take some chances if he is going to continue his points run.

"I will have to take some risks at the start because of the suspension failure that then finished in a gearbox failure," he said.

"Hopefully we will have a good start, a good first lap. It is quite optimistic to target points tomorrow. It is still the target, but will be very difficult to get them."

Leclerc still starts ahead of teammate Marcus Ericsson, who was at a loss to explain why his good form in practice was not carried over into qualifying as he ended up slowest overall.

"I think we are trying to understand now why we were struggling so much in qualifying," he said.

"All weekend we have been looking really good, and looked strong – right there in the mix in midfield and looking strong.

"But then in qualifying we struggle compared to the others to take the step that the others seem able to do. So at the moment we don't really know why or what is the reason for it.

"I was happy with the balance and the driving felt good. The stopwatch was not the good thing, but the rest felt quite alright.

"That was the problem. We need to understand why the others were able to take a step but we couldn't."