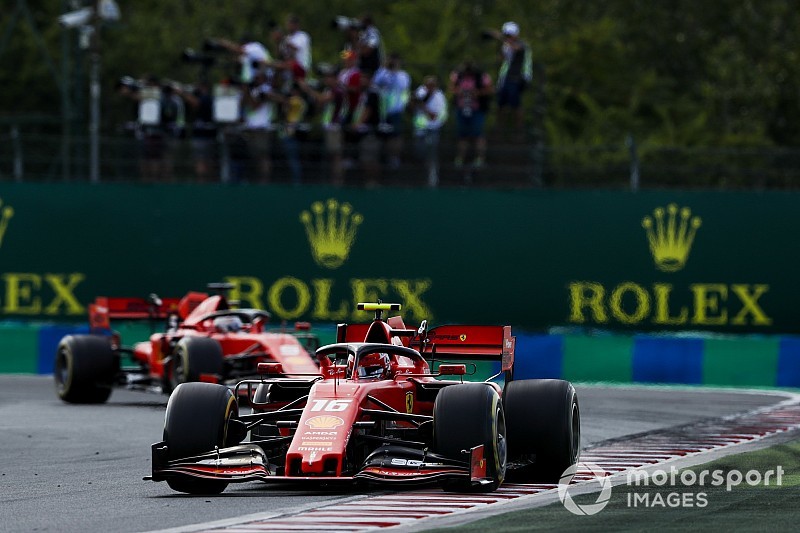 Charles Leclerc says he is prepared to drive less aggressively in order to stop being harder on his tyres than his Ferrari Formula 1 teammate Sebastian Vettel.

In Hungary, Leclerc suffered more with tyre issues than Vettel, losing pace at the end of his stints.

He ran in third place for much of the race until the German eventually caught and passed him in the closing laps to claim the final podium spot, leaving the Monegasque driver in fourth.

"It was a difficult one in general obviously," said Leclerc. "I was struggling quite a lot of with my rear tyres, from mid-race onwards. It was tyres going off.

Leclerc believes that something in his driving style is making the difference, but says he will also look at the set-up.

"I think I need to understand something on my side. I've been struggling more, and have more tyre degradation compared to Seb, and I believe it's also coming from driving. Maybe I'm driving a bit too aggressively now in races, so I need to understand and analyse and try to improve for the next races.

"I'm pretty sure that Seb is doing something better than me there, so I need to understand and improve that. I was lacking pace at the end of the first stint and the end of the second stint.

"That's a few races where I'm quite quick qualifying, but towards the end of the race I seem to struggle a bit more.

"I need to understand what I can do with my driving style to help that, or with the car balance to have a little bit of a compromise between the two, because at the end it's the race when you score points. Today it's a shame, but I'm pretty sure I will learn from it."

"Seb is in the races always very strong," he said. "He's aware that it's important for him to capitalise on his race pace. So when you may do some mistakes like at Silverstone that's not the best.

"But apart from that I'm very happy for that, he's experienced and knows how to manage the tyres. I think that is really his strength, and he's doing very well in that respect."

Steiner: Haas's problems bigger than if it had slow car