Charles Leclerc fears if Max Verstappen gets close behind in Formula 1’s first Miami Grand Prix it will be “very difficult” to stay ahead given Red Bull’s superior straight-line speed.

Leclerc claimed a third pole of the 2022 season by topping qualifying ahead of his Ferrari team-mate Carlos Sainz, with Verstappen ending up third after his final Q3 lap went wrong.

The Red Bull/Ferrari battle has swung across the opening rounds, with Red Bull’s better end-of-straight speed proving to be critical in Verstappen’s Jeddah victory, as Ferrari opted to run a higher downforce package in anticipation of bad tyre wear that never came.

There, Verstappen was able to make a crucial DRS pass, while Red Bull’s slippery aerodynamic profile also made it tough for Leclerc to put pressure on Sergio Perez during the middle phase of the GP last time out at Imola.

Ferrari has brought at a reprofiled rear wing to Miami with the aim of shedding drag it has carried throughout the opening rounds of the campaign, but Leclerc is still anticipating struggling to keep Verstappen at bay on the long straights around the Miami Gardens track.

“If they are close to us then it’s going to be very difficult,” he said in the post-qualifying press conference.

“But we’ve got this advantage in the corners, which hopefully [means] they will be too far [behind] to then have an opportunity of overtaking us on the straights.

“Only time will tell and we’ll only see that [in the race]. But the pace of the car is quite strong, so we’ll focus on ourselves and see where we are.” 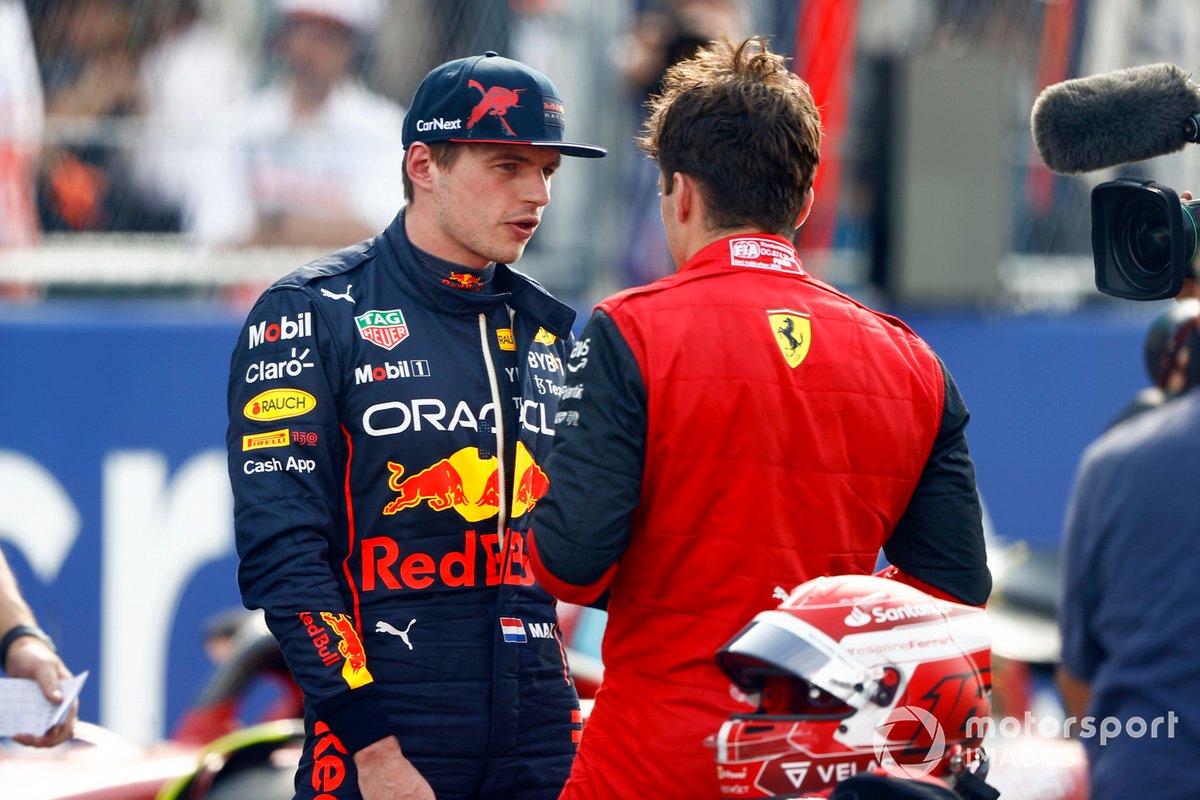 When asked how much confidence he had in the F1-75 package given the results he has secured in it so far in 2022, Leclerc replied: “A lot. It is a very strong package that we have – it works in more or less every conditions since the beginning of the season.

“So, that is a good sign for the future. But, as I’ve said many times, I think the upgrades this year will be very important.”

Of the Miami upgrade that Ferrari says has “depowered” its rear wing drag level in the official FIA document detailing car changes throughout the field, Leclerc said it “went in the right direction” and added that “hopefully we’ll have some more during the season to stay on top”.

Leclerc also said that having Sainz alongside him for the race start in Miami was “definitely better” for Ferrari’s chances of defeating Red Bull.

The untold Gilles Villeneuve story from inside Ferrari

Hamilton not planning to comply with F1 jewellery ban