"You could hardly have a better start than that" - Niki Lauda.

Jan.19 (GMM) The ever-wily Niki Lauda caused a stir last week when he appeared on the red carpet.

F1's great Austrian was in Hollywood to introduce the award candidature for the movie Rush, the biopic based on the legendary 1976 season.

The Golden Globes footage can be seen here. 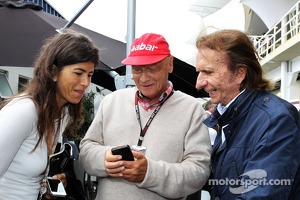 Keen-eyed observers will notice that the lettering on Lauda's ever-present red cap has changed since the last race of the 2013 season.

Indeed, the Golden Globes signalled the world debut of his new sponsor.

"You could hardly have a better start than that," the 64-year-old was quoted as saying.

But Welt newspaper reports that, within Lauda's native Austria, the company is a highly controversial gambling giant.

"I think the airplanes and Formula One cars have adjusted Mr Lauda's view of reality," said Peter Pilz, an Austrian parliamentarian.

Lauda is the chairman of Mercedes' F1 team, and yet the German carmaker is renowned today for its approach to ethics.

"The team plays no role in the choice of Niki Lauda's sponsor," Mercedes told Die Welt.

Pirelli protects itself in new three-year contract with Formula 1