Adrian Newey: "The more stringent the rules are, the faster we move towards 'GP1'. Do we want that?"

Jan.18 (GMM) Adrian Newey has confirmed reports an eleventh-hour ban by the FIA was a serious setback to Red Bull's 2012 preparations.

It emerged in recent days that, just as the reigning champions were preparing to test debut the ultimately title-winning RB8, F1's governing body banned Newey's solution to the new blown exhaust clampdown.

"It set us back further than we thought," Briton Newey told Germany's Auto Motor und Sport.

"When we looked at the new rules, we thought the effects would be less severe, especially because we thought we could compensate well."

However, the FIA said Red Bull could not use its proposed 2012 exhaust solution. 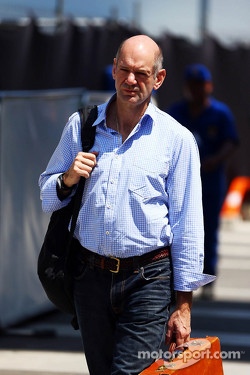 "So because of the lack of time we went to the first test with a conventional exhaust in the engine cowling," said Newey. Frantic work behind the scenes then began on a so-called 'Coanda' solution.

He revealed that the banned 2012 solution was a sophisticated sort of rear brake duct that absorbed exhaust gases.

"There was a loophole in the rules for the area behind the rear suspension," said designer Newey. "So you could have something that collects the gases and transports them where you want them."

The FIA quickly closed the loophole, leaving Red Bull scrambling for balance at the start of 2012.

"It was hard to find a balance, yes," Newey confirmed. "We had understeer, oversteer, often booth simultaneously."

He says often that the FIA's constant crusade against innovation is frustrating.

"We should be careful that the rules don't restrict the inventive spirit. The beauty of Formula One is the struggle of man against man but also machine against machine.

"There is something for every interest. The more stringent the rules are, the faster we move towards 'GP1'. Do we want that?

"I'm surprised how many of my colleagues at the meetings of the technical working group make the case for more restrictions. It's as if we are letting the turkeys vote for Christmas."

Massa not worried about growing 'Alonso factor' at Ferrari