Kubica had to take "too many risks" in Canada 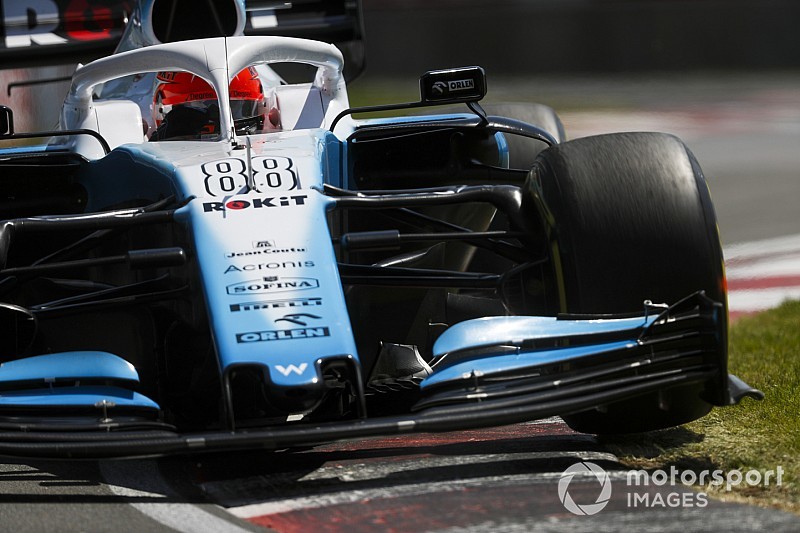 A frustrated Robert Kubica rued that there was "no magic" after he "took too many risks" and struggled to keep his Williams Formula 1 car on track on his way to 18th place in the Canadian GP.

The Pole made a good start and briefly ran as high as 15th ahead of teammate George Russell.

However, he suffered with handling issues from the first lap, explaining that the car was steering itself under braking.

Like Russell, Kubica has been classified in all seven races of 2019, although never higher than 16th.

"Unfortunately there is no magic," Kubica said. "Qualifying was already difficult with handling, and generally I have no grip, so with high fuel and track conditions hotter, and longer stints, it was even more difficult.

"Often the car was turning without really turning the steering wheel, just on the braking, and I don't know what to say honestly. It has been very difficult to keep it on track."

Asked if it was dangerous to drive, he said: "Not dangerous – in the end you know that it's like this, so you are not even able to push. But for the speed I had I took too many risks. But that's how it is. Overall grip is missing, honestly I don't know what to say."

Kubica admitted that he couldn't stay ahead of Russell after beating him away.

"A small fight, I overtook him into Turn One, and then he got me on the straight line, and that was it. But already on lap one I arrived into Turn 6 and Turn 8 really sideways before even turning the car. So it was difficult."

Russell was much happier with his afternoon, and was at least able to keep some faster cars behind him in the early laps.

"The car was feeling relatively nice to drive," he said when asked by Motorsport.com. "We maximised the package, we just need to bolt some downforce on it now. We've got to be pleased that we the race team maximised the car we had.

"I got a bit compromised by Kimi, who made a really bad start, then Robert got ahead of me through the first corner. Then he made a small mistake and I got a really good exit down the back straight, and I managed to overtake him again on the first lap.

"I definitely had a bit of fun, battling with myself really, and that's all we can do at the moment."

Russell acknowledged that the new front suspension introduced in Canada had been an improvement.

"The car is definitely feeling nicer to drive, unfortunately lap times didn't really show it for whatever reason this weekend. Before we had a car that wasn't nice to drive and lacking downforce, now we've got a car that lacks downforce, so we're making progress."

Ferrari may use 'right of review' to challenge Vettel penalty

Why teams are at loggerheads over F1's revolution