Kubica to replace Villeneuve in Hungary

BMW Sauber confirmed on August 1st that test driver Robert Kubica will replace Jacques Villeneuve for the Hungarian Grand Prix as Villeneuve is not ready to race after his crash at Hockenheim. The Canadian hit the barriers on lap 31 but seemed to be ...

BMW Sauber confirmed on August 1st that test driver Robert Kubica will replace Jacques Villeneuve for the Hungarian Grand Prix as Villeneuve is not ready to race after his crash at Hockenheim. The Canadian hit the barriers on lap 31 but seemed to be unharmed, although he said afterwards that the impact was quite hard. 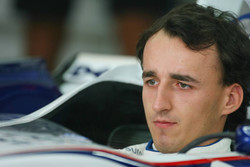 Kubica, who will be the first Pole to race in Formula One, has attracted some attention for his performances as BMW's third driver in the Friday practice sessions and has often been at the top of the time sheet. The 21 year-old joined BMW Sauber for 2006 after winning the World Series by Renault title last year.

"I had prepared myself for a whole year without actually competing in any races, so I'm even happier to get this opportunity," Kubica said about his upcoming race debut. "And I'm proud that the BMW Sauber F1 Team has such confidence in me. I'm determined not to let them down."

BMW motorsport director Mario Theissen is well known to be keen on Kubica. "Robert has made an outstanding impression with the team so far, both in testing and on the Friday of the race weekends," he said. "Now we will see how he performs in a Formula One race."

Hungary is a tough physical challenge for the drivers and perhaps Villeneuve is erring on the side of caution. Presumably he will return for Turkey after the summer break -- but then again, maybe not. "We have not yet made a decision on who will drive the car either in the remaining races of the season or next year," Theissen added.

Rosberg and Wurz to race Williams in 2007