May 23 (GMM) Heikki Kovalainen is looking for Caterham to move into the midfield, according to his new management company. 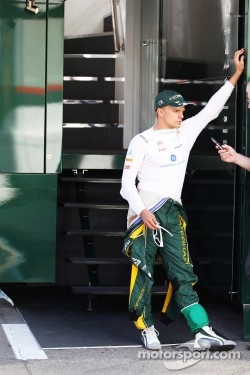 Having handled his own career in the wake of Flavio Briatore's demise, Finn Kovalainen recently signed up with IMG, the sports and entertainment management giant.

The 30-year-old has rebuilt his reputation since 2010 in the wake of mixed tenures for top teams Renault and McLaren.

According to IMG Motorsport's head of clients Martin Anayi, Kovalainen is now regarded by Formula One team bosses up and down pitlane as among the top best drivers.

"He is a great guy," Anayi is quoted by Finland's Turun Sanomat newspaper.

"Heikki's potential is obvious and he definitely wants to succeed."

There have been rumblings in the paddock that Kovalainen is disappointed that, despite being consistently the best of F1's new teams since 2010, Caterham is yet to break into the midfield.

"This is only the team's third season, so there are still some growing paints," IMG's Anayi acknowledged.

"Heikki has a strong desire to compete, and not just with his teammate Vitaly Petrov. The team's boss Tony Fernandes wants to get in with the middle group.

"This means that the team needs to regularly get into the Q2 stage of qualifying and in the race be aiming for the points," he insisted.

Briatore: Alonso "does not remember crash"