Jules Bianchi transported to hospital after crash with track vehicle 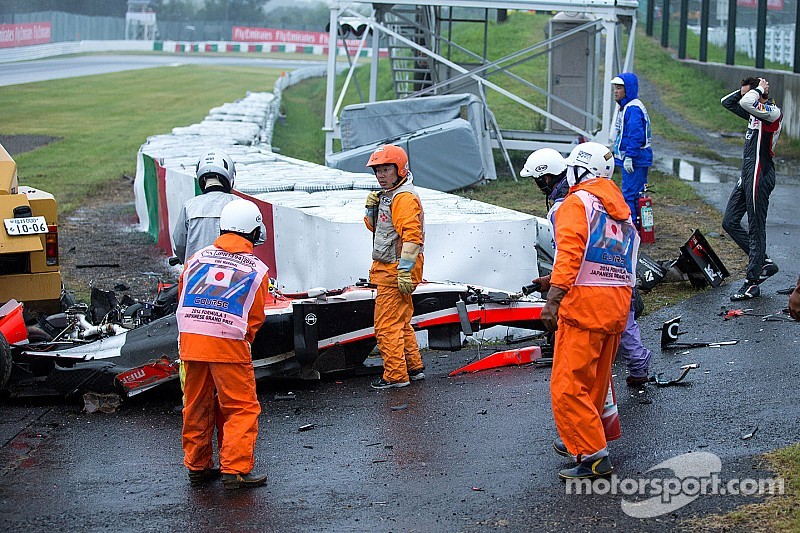 Early reports state the driver hit a recovery vehicle near the end of the Japanese GP.

Jules Bianchi has been seriously hurt in an incident that brought Sunday's rain-affected Japanese grand prix to a sombre close.

Adrian Sutil crashed on the wet Suzuka circuit, which brought out a recovery vehicle.

The FIA made the call to stop the race, which had earlier been interrupted with the safety car amid the difficult conditions, and Bianchi was initially taken by ambulance to the medical centre.

It was believed he would be taken by helicopter to hospital, but FIA spokesman Matteo Bonciani said it could not fly "in these conditions".

"The driver is not conscious," Bonciani said, revealing that Bianchi was instead transported by ambulance with a police escort.

They have given us some information and it seems very, very serious.

"Further updates will follow," he added, "but at the moment we cannot say anything. I will keep you updated as fast as I can."

Mercedes' Nico Rosberg said: "They have given us some information and it seems very, very serious."

Bianchi's damaged chassis was returned to an FIA garage after the race, and the British broadcaster Sky elected to film it only from a distance.

Fans and drivers are reaching out to the Marussia driver both in television interviews and on Twitter. Images from the scene show a destoryed Marussia car and emergency workers frantically working to extricate the driver.